Remembrance Day/Veterans Day stories from the Habs and Bruins

Bitter rivals on the ice, the Montreal Canadiens and Boston Bruins demonstrated solidarity in different ways towards the battle for liberty during World World War II.

One of the prime examples of this was caught on film, after a February 10th 1942 game between these two teams in Boston Garden. It was the final game for Boston’s famous Kraut Line of Milt Schmidt, Bobby Bauer and Woody Dumart before the reported to duty for the Royal Canadian Air Force (RCAF) in Ottawa.

During the war, hockey players in the 21 to 25 age group were as subject as any other young Canadian men to be called up by the army. Many enlisted voluntarily. Other hockey players had joined the armed forces before them but the simultaneous enlistment of the Kraut line members, three star players from the defending Stanley Cup champions, was big news.

In the Krauts’ farewell, the line went on a last scoring spree, collecting 10 points in a crushing 8-1 defeat of the Habs. But it is the scene that occurred after the final whistle in this game that is most memorable.

The short clip below from February 10 shows Bruins John Crawford presenting gifts to the Krauts, then you see Dumart (14) and Schmidt (15) being carried onto the shoulders of both Bruins and Canadiens players while the Boston Garden crowd gives them a standing ovation. On-ice rivalry was put aside as the Canadiens joined the Bruins in supporting these young men, who were going to serve their country. On the clip, Schmidt, now 92, mentions that he was deeply touched by the gesture.

"The attitude, feelings of the Montreal Canadiens had, for the Krauts that night, they were fantastic. What more could you ask for. And that’s one of the things that I can remember clearly as if it was yesterday." 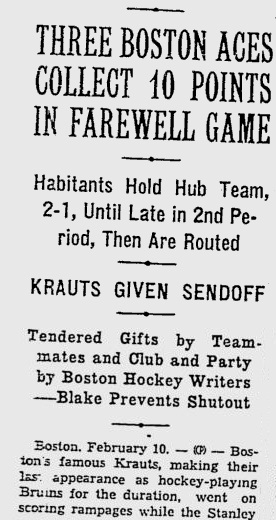 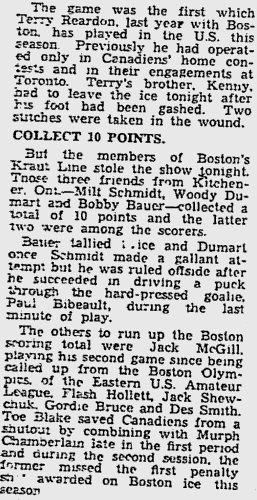 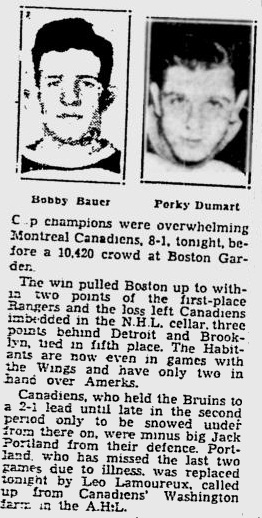 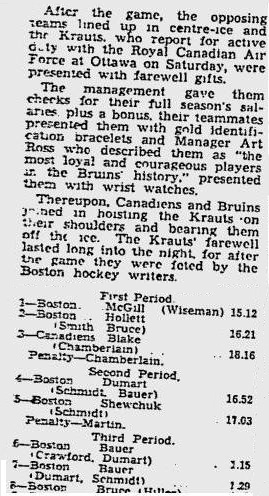 Schmidt, Bauer and Dumart trained for the RCAF in , and bolstered their hockey team so much that it won the Allan Cup that season, as the top amateur team in Canada. They were later posted for overseas service.

Other NHL players including many in that February 10th game were probably thinking they might be the next to join the armed forces, since many were expected to be called at the time. That, of course, would happen. Other Bruins players enlisted, including All-Star goalie Frank Brimsek, an American, who joined the US army in 1943.

As for the Canadiens, eight players from the 1941-42 season, including six who played in that February 10th game, joined the armed forces in the following months or year. Pete Morin, Ken Reardon and John Quilty enlisted at season’s end. Three others - Cliff Goupille, Tony Demers, and Terry Reardon (Ken’s older brother) - joined early in the 1942-43 season, and were followed at that season’s end by Joe Benoît, John Portland and Gordie Drillon.

As fate would have it, young Canadiens players Maurice Richard and Elmer Lach failed their army physical examinations because of their injury history. Along with Toe Blake, they would form the famous Punch Line in 1943-44 and lead the Canadiens to a Stanley Cup win that year and again after the war, in 1946.

In all, over 100 NHL regulars or prospects from all of the NHL teams were called up or enlisted voluntarily in the Canadian or US Armed Forces during the Second World War. 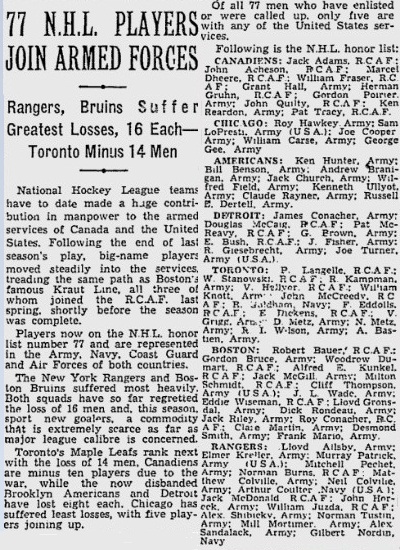 Of course, everybody probably had in mind that the players who joined could face the dangers of war. Some would be injured and others would make the ultimate sacrifice. Just days prior to that February 10th game in Boston, a young Detroit Red Wings goaltender named Joe Turner had played his first and only game in the NHL. In January 1945, he would be the second man to have played in the NHL to be killed during the war, just a few months after Red Garrett, who played 23 games for the New York Rangers in the 1942-43 season.

While many NHL players were in the armed forces, a great number of those who remained worked in various war factories in the off-season and during the season. During the Canadiens Stanley Cup winning season of 1943-44, the team held it’s practices in the evenings so that the players could work at their wartime day jobs. 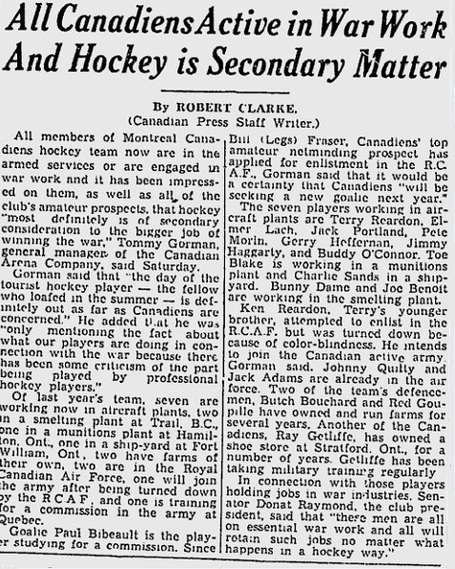 A newspaper article from April 1942

In 1942, there was talk of the NHL suspending operations for the duration. Canadian and American governments agreed with NHL president Frank Calder that hockey should continue, as other pro sports, to help sustain the population’s morale.

On top of losing a good number of players to the armed forces, team managers also had to deal with travel restrictions imposed on others in the 21-25 age group. They showed some solidarity be loaning each other players during the war years.

Since he could not rejoin his Stanley Cup champion teammates in Boston, because of this travel restriction, Terry Reardon was loaned from the Bruins to the Canadiens, prior to the 1941-42 season, in exchange for Paul Gauthier. The Kraut line farewell was actually Reardon’s first game in the United States that season for the Canadiens. Murph Chamberlain was loaned from the Canadiens to the Bruins for the 1942-43 season. As well, with the emergence of Bill Durnan in 1943, the Habs loaned goalie Paul Bibeault to the Maple Leafs to replace Turk Broda, who had joined the armed forces. One year later, Bibeault was loaned to the Bruins who had lost Brimsek.

Meanwhile, NHL teams such as the Canadiens and Bruins contributed to the war effort was by participating in various fundraising events for different causes.

Maurice Richard’s very first game with the Canadiens was a pre-season exhibition benefit game held October 9th 1942 against a newly-formed army team which included Ken Reardon and other enlisted NHL players, such as the Rangers line formed of the Coulville brothers and Alex Shibicky and their goaltender Jim Henry. It was the first of three closely contested benefit games (two Canadiens win and a tie) between these two teams that month. Ken Reardon’s army team, the Ottawa Commandos, won the Allan Cup in 1943. One year later, he would join the war overseas and be decorated for actions of courage during battle. 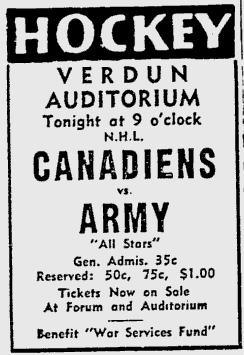 An ad for the October 9th 1942 pre-season benefit game, Maurice Richard's first game with the Canadiens

That October, the Canadiens and Bruins were to play a series of exhibition games in with proceeds going to the American war effort. Tommy Gorman and Art Ross had agreed to it but transportation problems forced the tour to be postponed to the spring.

Finally, the Canadiens went alone to the west coast in April, after being eliminated by the Bruins in the Stanley Cup semi-finals. In a tour that was dubbed by the Los Angeles Times as the fabled Les Canadiens Southern California invasion, the Habs won two games against a team and a four out of seven series (four games to one) against the B.C. Navy team. The two opponents had their line-ups bolstered by NHL players such as the three Bentley brothers from the Chicago Black Hawks and Turk Broda of the Leafs. Maurice Richard didn’t play because he was sidelined since suffering a broken ankle in a game against the Bruins on December 27.

Prior to that, on December 12 1942, the Bruins and the Canadiens played a rare afternoon game in Boston where all proceeds, over 6 200 $, went to the American Red Cross. Even the players and reporters paid their admission. A 3-2 Boston win, the game was the first one in which the Canadiens had a full line-up in the U.S. and that included players who had passport problems, such as Émile Bouchard, Elmer Lach, Terry Reardon and Maurice Richard, who scored one of the Habs goals.

But for Terry Reardon, it was his farewell game for the duration as he set to join the army. It was also his last game for the Canadiens, as with the war and his loan over, he would be rejoining the Bruins along with the Kraut line members and Frank Brimsek for the 1945-46 season. Meanwhile, Ken Reardon, Joe Benoit and John Quilty are three that would play again for the Habs after the war, their service to their country rendered, as so many others, that we remember and honor on this day. 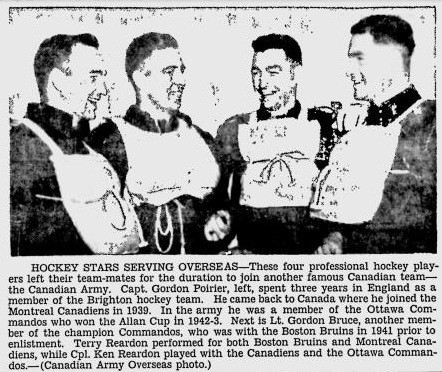