Price grades a B- in opener.

Share All sharing options for: Price grades a B- in opener. 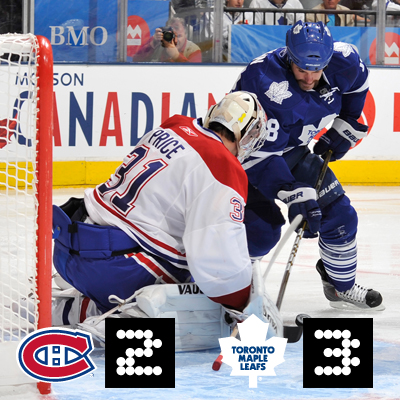 Throughout the season I will attempt to cover Price in depth. Not only for my own enjoyment, but as part of a bigger project I am working on as well as an attempt to curb the nonsense that I read last night with the same droning fools blaming him for the loss.

So with a beer in one hand and NHL GameCenter Live in the other I took a detailed look at the Canadiens opener with an eye at breaking down Price's performance.

It was interesting to see Glen Healey proclaim that this goal was on Carey Price because he had gone down to early. Analysis like this is exactly the issue when it comes to hanging a goaltender out to dry. Alexandre Picard goes to the end boards to act as support and offer Tomas Plekanec an outlet to clear the zone, Ryan O'Byrne is caught in no-man's land covering Mike Brown and Plekanec makes the wrong decision by choosing the option with no puck support and turns the puck over. With the quick turnover Picard is out of position to recover and Tim Brent is left alone in front for a tip-in.

Carey Price is exactly where he should be at the top of the blue paint, square to the puck dropping to the butterfly to 1. stop the shot and 2. maximize net coverage should it be tipped. Brent makes a brilliant tip into the top corner of the post and Healey attacks Price's positioning? This guy was an NHL goaltender for a decade, right?

This is the type of knee jerk analysis that leads to scapegoating. Somehow the only player in the play who isn't out of position becomes the focal point for the blame. This is when I turned the channel to RDS to listen blissfully to a language I do not understand.

Which leads us to goal two minutes later.

You can't blame Carey Price for this goal, it is the result of a poor Hal Gill pinch. A clear cut breakaway from the blueline against the Leafs most dangerous goal scorer can hardly be placed at his feet, but it is a save that Price needs to make to stem the tide. This is the season where he needs to do the impossible at times, where he needs to dominate games and this was his opportunity to put his stamp on this game. To lock down and save Hal Gill's ass. Unfair as this may be, with Halak gone and the pressure of his own resume, that is the role that is expected of him now.

Price almost pulled it off. He was out in the proper challenge position, maintained the proper gap control and although he bit on the head fake his athleticism and footwork allowed him to recover and make the save, unfortunately it slipped just past the goal line as his momentum carried him backwards. It is a save that he could have made had he recognized the possible help cutting off the slot or not biting on the fake. Not his fault, but a failed opportunity to shut down the Leafs momentum.

This is another goal where Healey laid the blame on Price for going down to early. Nevermind that Spacek got turned inside-out and allowed a scoring chance from the center of the slot, let's blame Carey Price again. Price can be blamed for the technique choice he made before the play developed. Price decided with Clarke Macarthur at the faceoff dot to adopt the VH technique to cover his post, it is a questionable decision because the VH is most effective when the attacking player is behind the goal, attempting a wraparound or just above the goal line. Macarthur is pretty high for him to adapt this position and when Macarthur cuts to the middle Price already with a pad on the ice decides to just butterfly push to the center of his crease. He lacks the proper depth that a full t-push could have provided as well as not committing himself to the ice prior to the shot. Healey was correct in that he was down early, but he offered up zero explanation for where the mistake occurred and ignored Spacek's matador attempt at defense.

Overall I thought it was a solid performance. Although he made a slight error on the 3rd goal he was exceptional in his positioning and lateral movement on this early Tyler Bozak chance and was outright larcenous on Kessel late in the game to give the Canadiens a chance to tie the game.

I counted 13 good scoring opportunities for the Leafs and the Leafs were awarded two phantom shots to help pad Price's SV%. Considering the opener in 2010 when the Leafs combined for 90+ attempts at the net, Price had a much easier ride last night. Price faced 22 shots (+2 bonus), 21 blocks and 9 misses for a reasonable number of 52 attempts.

Unfortunately the Canadiens continue to refuse to score goals for him. If they continue to offer two goals or less it will be another long season for him. 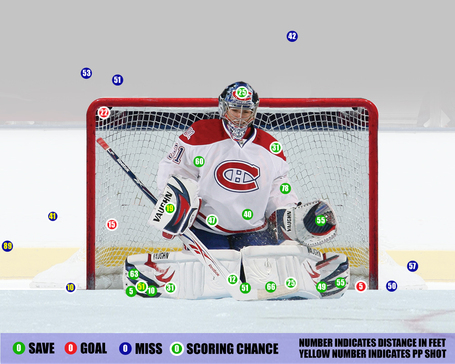 If I had to make a list of those responsible for the loss, Price wouldn't be near the top of the list. Price delivered a competent performance. With the abuse heaped on Price over the last season, it is easy to get caught pulling for him and forgiving errors and removing fault for defensive breakdowns. Like I mentioned earlier, that is not an acceptable stance any longer. He has over 150 NHL games on his resume and the franchise now rests on his shoulders. He needs to raise the level of his game and last night was a game where a sharp Carey Price could have gained a point or a regulation victory.

I liked his composure and thought he offered a pretty strong technical performance. He left me wanting more, so I can offer him no more than a B- for last night. For the Canadiens to take the next step he needs to hover around an A all season.