He said: EOTP talks to "The Voice of the Habs"

Share All sharing options for: He said: EOTP talks to "The Voice of the Habs"

This is a two part segment from Eyes On The Prize, featuring a pair of notable Montreal media personalities. I fielded a set of similar questions to each of them getting their observations of the pre-season and what to expect as the regular season gets under way. Part two will be featured tomorrow.

First up is the voice of the Montreal Canadiens, CJAD's very own Rick Moffat.

Moffat has been with the Habs broadcast crew since the spring of 2004, and pretty much follows and travels with the team from training camp straight through the playoffs. He is also the voice of the Montreal Allouette, so we appreciate him taking time to answer a few questions.

Never at a loss for words, Mr. Moffat gives a straight up opinion of the team as the season progresses.

One change this season for Moffat will be a new partner in the broadcast booth. He is now joined by former Habs tough guy Sergio Momesso (pictured below), who takes over the commentary after Murray Wilson retired after a decade on the job. 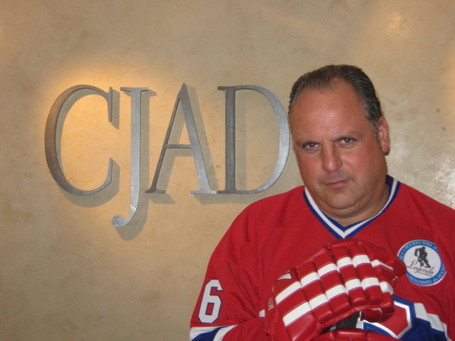 Momesso could be heard on some of CJAD's post-game shows during last season's playoff run, and was asked to join the team. 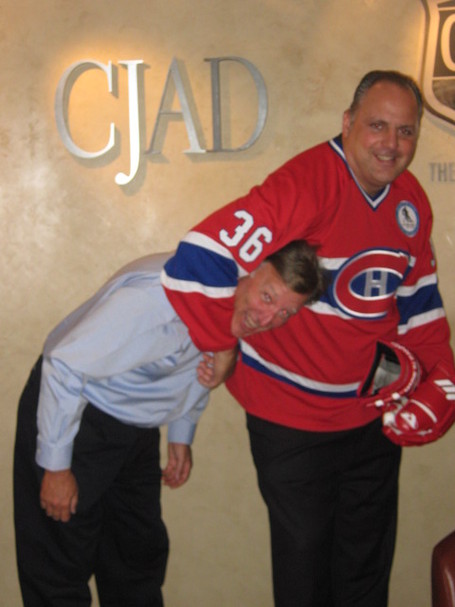 "He's terrific," Moffat said on his new partner, who is a little more laid back than his predecessor on air. "He's a real strong character."

EOTP: Rick first off, were  you surprised at the suspension given to Mike Cammalleri?

Rick: If it was a Hab who was pitchforked, Montreal would be screaming. I think a game is fair.

EOTP: Is this the year for Carey Price to prove he can be the undisputed No. 1 goalie in Montreal?

Rick: I believe so, and I've gone a step further suggesting Carey will win more games and have better save percentage and GAA than Jaro this year. Not that it matters, right?

EOTP: Was Brian Gionta the right choice to wear the C?

Rick: Definitely.  A year ago I touted Josh Gorges as being 2 or 3 years off. Josh remains in Jacques Martin's "Group of 7 Leaders" for the 2nd straight year.

But I loved Andrei Markov's gag pulling total poker-face on a French TV news reporter...he claimed he thought P.K. Subban should have been captain. That sent the unsuspecting reporter buzzing around the room for reaction. Maxim Lapierre didn’t know what to say.

Markov I don't think would have suffered the media duties all season long as easily as Gionta will.

ETOP: After watching training camp, who impressed you most?

Rick: Lars Eller for his ease and patience with the puck.  Ryan White for his hustle.

EOTP: Which player, on last season's Habs roster, really needs to step up this season to keep his place on this season's roster?

Rick: Benoit Pouliot to keep his spot on the Gio-Gomez Line, Ryan O'Byrne has to be better to remain as the tough 7th D-man.

EOTP: Who could really be the surprise player this season?

Rick: Dustin Boyd and Jeff Halpern will make their biggest contributions in the playoffs.

EOTP: What is the best strength of the Canadiens?

Rick: Speed up front, experience on the back end.

EOTP: What is their weakness?

Rick: Spacek and Hamrlik have to prove the fountain of youth is flowing for them.

EOTP: Prediction: The Habs will finish where in the Eastern Conference?

Away from the radio mic, Moffat still gives to the community. He is a strong supporter of several local charities in the Montreal area including,  Amnesty International, the MAB-Mackay Foundation,and the Montreal Children's Hospital.

He was also kind enough to pay a visit , along with his CJAD crew, to  the Habs Inside Out Fan Summit last season. 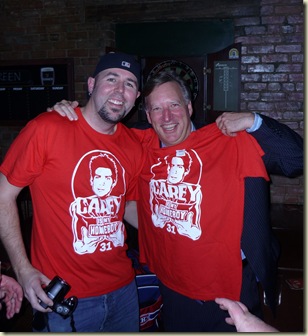