Share All sharing options for: Montreal Canadiens Season Preview: Is it Price's time?

The Montreal Canadiens are about to embark on their 102nd season, still in search of Stanley Cup No. 25.

The playoffs are always referred to "the second season" or a whole new page. The Habs showed just that in 2009-10. After a spectacular, and shocking playoff run, expectations will be running high from the Habs faithful. Of course many know why the Canadiens had such a great run, and that element is no longer with the team.

With Carey Price now officially given the keys to the Canadiens goal crease, all eyes will be focused on him to see whether or not he will be the franchise player he was expected to be.

Surprisingly, many other previews (The Hockey News, USAToday, ESPN) have the Habs barely making the playoffs yet again or finishing as low as 13th. Coach Jacques Martin and company will be looking to prove the "experts" wrong.

The revamped Habs started the 2009-10 season by losing their best defenseman, Andrei Markov, in the first game of the season against the Toronto Maple Leafs. In fact, the Habs' blueline corps was a mess in the first couple months, forcing then GM Bob Gainey to go fishing for off-season leftovers (Jay Leach and Marc-Andre Bergeron) to fill the voids.

Injuries were a key issue throughout the year, with notables such as Brian Gionta, Mike Cammalleri and Andrei Kostitsyn all spending time on the injured list for prolonged period.

Essentially the injury bug didn't allow a team that had been blown up in the summer of '09 to gel together, or "find an identity" as Jacques Martin put it.

After the midway point, Gainey surprised many that he was stepping down as GM and named his assistant Pierre Gauthier as his successor. Gauthier made just one significant move before the trade deadline, acquiring Dominic Moore and surprising many by not trading Jaroslav Halak or Price, who were both pending restricted free agents at the time.

That non-trade paid off in the playoffs. When Price faltered horrendously on the tail end of the season, Halak grabbed the rights to help get the Habs in the playoffs on the second to last day of the season. From there he stood on his head against the Washington Capitals, despite some "hand-shaking" moments, and the Pittsburgh Penguins with some very busy nights in the Habs goal.

By the time the Eastern Conference Final, came the team ran out of gas. Losing Markov again, in the second round against Pittsburgh, took it's toll on the tired defensive corps. Many felt Halak should be "The Man" in Montreal. Unfortunately the antics of his agent during the regular season discouraged any contract negotiations, and we all know what happened after that.

WHO WENT IN THE OFF-SEASON?

The trade to move Halak angered many fans, after seeing his performance in the playoffs, but the Canadiens management strongly were in favour of Price being their number one goalie, even admitting they made no negotiation attempts with agent Allan Walsh before the deal was made. Halak too had spent several seasons in waiting and after a brilliant playoff run, would want to be a starting goaltender be it in Montreal or elsewhere.

Gauthier knew that and after some calls and tire kicking, he pulled the trigger. The deal also opened up cap room to allow the Canadiens to re-sign center Tomas Plekanec to a contract extension.

Halak showed no hard feelings towards the organization with the trade, and returned to Montreal in September for an autograph signing to thank the fans, and raise money for a Montreal children's hospital.

Moore provided to be an excellent two-way forward and filled the void nicely for the Canadiens after being acquired from the Florida Panthers. The only problem with Moore, is that he never stays in the same place for long. With Ryan White and Tom Pyatt waiting in the wings, he became expendable.

A journeyman and popular player, Metropolit had some relative success on the Habs power play last season. Unfortunately injuries and age finally caught up with him by season's end, and with younger player waiting the Canadiens diplomatically made him aware they would not be requiring his services in 2010-11.

A great feature on Metro, after his departure by the Montreal Gazette's Dave Stubbs.

With numerous injuries on the blueline, the Habs brought in Bergeron, who remained unsigned all summer, to bolster the Canadiens power play. While his offensive numbers paralleled the ones he had, with the Minnesota Wild, the year prior his defensive liabilities were severely exposed. With P.K. Subban emerging in the playoffs, the Canadiens chose not to pursue MAB. Given the fact no other teams took him in the summer of '09, it's no surprised he remains unsigned in October of 2010.

Mara gave the Canadiens some good size on the blueline, after his free agent signing last July. A shoulder injury limited the former first-round draft pick (1997) to just 42 regular season games. His shoes shouldn't be too hard to fill after a strong camp from both Alexandre Picard and Alex Henry.

The younger brother of Andre found himself in coach Martin's doghouse before the regular season even began. After being demoted to the Hamilton Bulldogs to start last season, Kostitsyn refused to go to Hamilton and reportedly demanded to be traded. He got his wish, but after a lackluster season with the Canadiens. Though unconfirmed, some reports out of Music City already have him touted as a problem child yet again.

Ellis' rights belonged to the Canadiens for about 24 hours. His Twitter account didn't stay up much longer than that.

The deal that sent Halak to the mid-west hopefully pans out better than the one that sent Patrick Roy to Colorado in 1995.

Eller was the big piece coming to Montreal seems to be the real deal. He was the Blues' No. 2 prospect on their depth chart last year, recording 57 points in 70 games last season in the AHL. He had an impressive camp, and should start as the Habs' No. 3 center. Eller can also play on the wing, which gives Martin some diversity to use him on the top-two lines if needed.

An early September signing, Halpern will strongly fill the void left by Moore and Metropolit. Halpern is a face-off specialist and will also fit in nicely with the Habs' leadership committee (he is a former Washington Capitals captain). If he can contribute offensively, as he did earlier in his career, it would be an added bonus.

The asset that the Canadiens actually kept in the Sergei Kostitsyn deal, Boyd has shown scoring potential in the minors and at the junior level. The 24-year-old will have to battle to keep and maintain a roster spot with a crop of under 25-year-olds looking to make the club.

When Dan Ellis "bolted" to Tampa, the Canadiens had to find a backup for Carey Price. They didn't take long, bringing in veteran Alex Auld, who Gauthier hopes can work with Price and be at the ready when needed. Auld's past experience with Martin and Habs' goaltending coach Pierre Groulx should also be a benefit.

Auld also knows his position with the club, which should curb any goaltending controversies. "I'm a big believer that a relationship between two goalies is important," he said in a recent Montreal Gazette feature. "You can't force that, it just has to develop. We both have the same sort of easygoing mentality, we're both competitors, we both want to win and push each other. I think it's a perfect mix." 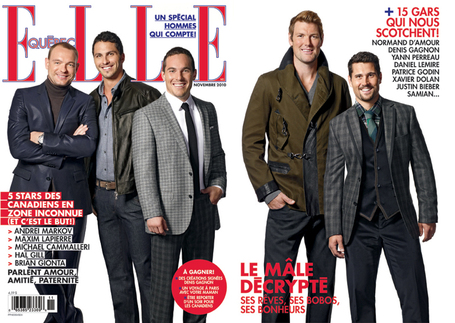 Leadership and Diversity: Brian Gionta was recently named as the 28th captain in the franchise history, after the club went a full season without one and went with a trio of alternate captains. With players like Markov, Cammalleri, Halpern, Hal Gill and Josh Gorges working together in the room with him, the morale on the team should stay strong. The Canadiens have a strong contingent of forwards, especially natural centers, who can play at various positions. Even Yannick Weber can move from defense to forward occasionally. This gives coach Martin some strong variables in setting up line combinations as the season progresses.

Power Play: After a slow start, the Canadiens finished second in the league last year with the man advantage. Through the pre-season, it had been nearly invisible until their last game against the New York Islanders. But if Subban can anchor the point while Markov is on the mend, it could be absolutely lethal, with the two of them, come November. However, their 261 power play opportunities were the lowest by far of the top-10 teams in the league. Drawing more calls would be an asset.

Discipline: The Canadiens power play comes partly due to their ability to stay out of the penalty box. Last season they were 8th lowest in the league (3rd in the Eastern Conference) in terms of PIM per game and had just a pair of misconduct penalties. By comparison, they were 22nd in the league in 2008-09 and 11 misconducts.

Cammalleri may not have helped this situation, to start the season, after his recent incident with the Islanders Nino Niederreiter cost him a suspension for the season opener.

Age on the blueline

No argument that Gill, Jaroslav Spacek and Roman Hamrlik can be workhorses on the Canadiens blueline. All three are 35 or older, and it will questioned if they can go another two or more rounds into the playoffs before running out of steam. Gill and Hamrlik, already battling injuries in the pre-season (along with Markov) will be unrestricted free agents at season's end.

The Canadiens injury problems last season exposed the teams weaknesses on the depth chart, leaving them to scratch their way into the playoffs. With Markov already out until late October at the earliest, a multitude of injuries over a stretch could be devastating, unless the talent on the Bulldogs can be ready to step up.

Injuries aside, the Canadiens should have had two effective scoring lines last season. Two major players that need to step up here are Kostitsyn and Benoit Pouliot. Eyes will be on Kostitsyn, who has the best shot on the team according to his teammates, to see if he can emerge as a productive winger now that little brother is out of the way.

Pouliot struggled through the post-season, and even in the pre-season until the final game, after a good start when he came over in the Guillaume Latendresse trade. WIth Lars Eller in waiting on the third line, the puck is in his rink.

Players noted with an asterisk are projected roster players for the upcoming season.

The rest of the prospects can be found on the Canadiens website.