That A was for Jack Todd

Share All sharing options for: That A was for Jack Todd

You think anybody is concerned with the three goals on eight shots that Carey Price gave up to the Bruins in September right now? Unfortunately, it would be just as ridiculous for Price supporters to get as high after the Pens game as all those who jumped all over Price for his low against the Bruins.

It was an encouraging sign, but the fanbase reacted to Saturday like he has never done it before. Price was outstanding to open the 2010 season and followed up two outstanding games with a 7-1 loss. Price had an outstanding November/December and fell apart in January and after one of his greatest starts of his career against the Sharks last March failed to get out of the first period three nights later.

Saturday night offered some encouraging signs. His footwork and positioning were brilliant and it is always a good sign when his logo looks like a magnet for the puck. Going over the highlights on Gamecenter I was impressed with Price's ability to square up to the puck and control his rebounds by either absorbing them in his mid section or by pushing shots to the corners with an active stick and outstanding pad control, a stark contrast to the monster rebounds that were being kicked out by the over rated Fleury.

I was most impressed Saturday night with Price's anticipation and his ability to be a half second ahead of the Pens for most of the night.

Look how quickly he moved laterally on this Evgeni Malkin power play goal. A powerful push after a momentum change and the puck slipped uner his glove on a Malkin one-timer. He was inches away from making his second unbelievable cross crease save on the big two.

I have seen some sites list his mental toughness after giving up a weak goal in making a couple of big saves, but I didn't see him allow a weak goal. Marc-Andre Fleury allowed a weak goal, Price was beat on a clean shot unimpeded from the slot area

The Canadiens were in good position on this rush. P.K. Subban and Picard had the two on two covered, but Subban overplayed Matt Cooke creating a two on one. Picard mindful of the trailing Tyler Kennedy and Kris Letang couldn't commit to Mark Letestu leaving him one on one with Price from about 20 feet. Price was out at the top of the blue paint and had his angle covered but was fooled by the speed and release of the shot. Unfortunately NHL.com doesn't provide the replay on this play but Letestu's shot was released from the heel of his stick throwing off Price's reaction. Is it a save he could have made? Sure, but it wasn't a weak or bad goal.

Look at the anticipation and his explosive lateral movement on his greatest hits from Saturday night.

The Canadiens have made a habit of relying on fantastic goaltending to put themselves in a position to win, looking at the Fenwick and Corsi numbers for the Penguins game they are fortunate to have stolen a win. Only Mike Cammalleri and Picard were able to register positive Corsi results, Brian Gionta and Scott Gomez registered a -12 and -9 respectively.

For those unfamiliar with Corsi, here is a good description from Jonathan Willis over at The Copper and Blue and his article on the creator of the stat, Jim Corsi.

The NHL tracks shots on net, missed shots and blocked shots. The Corsi number is the total of all shots at net (incl. misses and blocks) for and against while a player is on the ice. To make it more accurate, this is often measured only at even-strength. Because the vast majority of shots come from the offensive zone, this statistic is a fairly good measure of who is spending a lot of time in the offensive zone, and who is getting stuck in the defensive zone.

Here is Gabriel Desjardins take at Behind the Net.

Corsi can be a flawed statistic when looked upon individually. There are factors such as zone starts, quality of competition, the quality of your teammates and shot quality which can influence your final number. When assessing team play at even strength it is a pretty fair evaluation of who is dominating puck possession and offensive zone time. 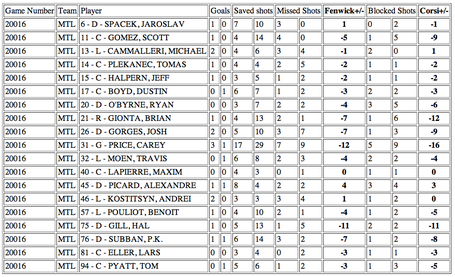 Even strength has been an issue with the Canadiens for the past two seasons and the Corsi stat highlights these struggles.The Pens had 24 quality scoring chances (15 of which occurred at even strength), four to five of which looked like sure goals. Although we have become accustom to this type of team, it is not reasonable to expect Price to replicate this type of performance on a nightly basis. 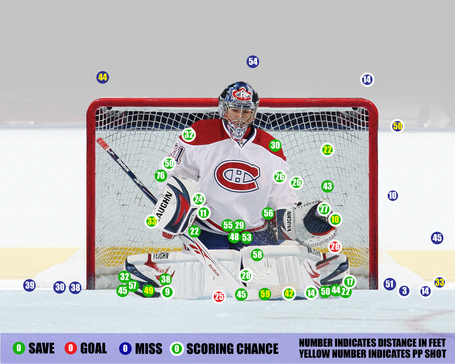 Once again the official scorer provided Price with a phantom shot to pad his SV% again. Price rates an A and would have received an A+ had he not been fooled by Letestu in the third.

A statement game? I hope so.