There's a new voice, for Montreal Canadiens broadcasts, joining play-by-play man Rick Moffat on CJAD this season. The voice and the face shouldn't be unfamiliar to Habs fans though.

Sergio Momesso, a Montreal native, got his career started with the hometown Montreal Canadiens and saw his first NHL game during the 1983-84 season. Two years later, he was with the club full-time, but a knee injury early that season limited him to just 24 games, missing the playoffs. The Canadiens went on to win the Stanley Cup that season, but his name was not engraved on the Cup. Nonetheless, the team did include Momesso in the championship photo and he did receive a ring.

The long-time tough guy registered 1557 penalty minutes, in parts of a dozen NHL seasons, with five NHL teams. Momesso could also find the back of the net, and was often in double digits in goal scoring. His career point tally came in 1989-90, with the St. Louis Blues, when he scored 24 goals and added 32 assists on a line with Brett Hull and Adam Oates.

Unable to find a new home in the NHL, Momesso had a productive four-year run in the German League before retiring after the 2000-01 season.

After spending time as a coach in the QMJHL, at Concordia University, and with the Hamilton Bulldogs (AHL), Momesso finds himself high above the ice analyzing the game he loves.

He received his first taste of the broadcast both last season, filling in on occasion for regular CJAD colour man Murray Wilson, as well as during the playoffs, joining Abe Hefter during the post-game show.

When WIlson retired after the 2009-10 season, the search was on for a replacement. After narrowing down the list of candidates, the station came to an easy conclusion.

"I wanted to be back around the game again," Momesso said. "So when i was asked to fill in for Murray Wilson, I did it and liked it. I was always comfortable speaking to the reporters after a game and for interviews. Talking about hockey to people is something that I have always done, so its a good fit." 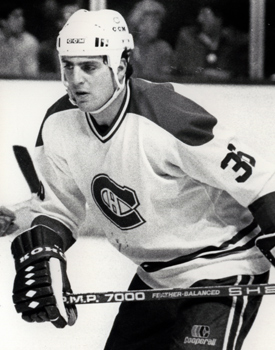 Momesso's playing career began in an era where fighting in the league was the norm, and before the instigator rule was introduced in 1992. According to HockeyFights.com the winger had 62 career fights (six in the post-season) to his record, and back then a double header during the evening was commonplace.

His won-loss record can always be debated and he never managed to exceed 200 PIM during his NHL career. He was smart when to pick his fights.

The contoversial instigator rule has always been challenged by several NHL players as a way for predator-type players to do their harm, to players less able to defend themselves, and get away with it.

"The instigator rule was put in place to try to stop players from more fights in a game," he said. "The problem is that the players, that are running around causing problems on the ice, are usually the ones that don't want to fight after.

"If you want to play that way fine. Then, you should be able to back it up" 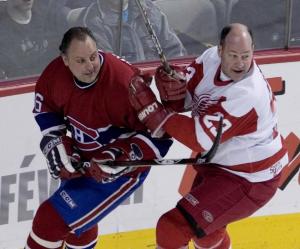 The way the NHL handles their disciplinary actions is something that Momesso also feels needs to be looked at. According to him,  the one-sided, one-man system currently in place needs a second input. "I believe there should be a rep from the players side (NHLPA) also."