Share All sharing options for: Four Questions on the Habs From Devil's Site In Lou We Trust 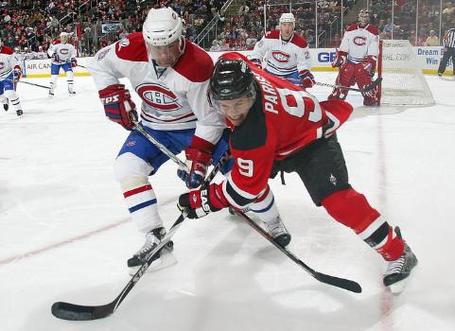 A very in depth pre-game look at tonight's Habs / Devils tilt is available at In Lou We Trust. John Fischer fired some questions here at In Bob We Bust yesterday, and here's how all that went down.

1. Montreal just defeated the Florida Panthers 2-0 in a game where both teams threw everything at the goaltenders and Jaroslav Halak rose above Tomas Vokoun to get the shutout win. While the win was nice, what do you see in that game that Montreal needs to improve upon for tonight's game against New Jersey?

Truth be told, the Canadiens can still improve in just about every facet that doesn't involve special teams and goaltending. They surely will not penetrate Jersey's defense as they were able to against the Panthers. Montreal will not fire 39 shots on Marty in this lifetime!

Against the Devils, the impossible mission always involves creating outmanned advantages and beating them to the puck in all three zones. Not gonna happen, but the effort to do so has to be consistent in order for the Canadiens to capitalize on the few chances they may create. Last time in Jersey, they learned that a 1-0 lead is simply not enough. If the Habs work hard enough to gain a lead at any point in the game, they'd better be disciplined to hold onto it.

That may just be that they've been served a weaker road opponent over the scheds first half. That and the fact that there is no hometown crowd to get fancy in front of.

An honest assessment would be that without Markov and Gionta for a chunk, Montreal is pretty much the .500 hockey club their record says they are.

3. Brian Gionta finally recovered from his broken foot and will play against the Devils for the first time since signing with Montreal. I see that since his return, he has scored 2 goals and 3 assists. Very nice. Clearly, he's producing, but Devils fans are interested to see how does he fit in Montreal now?

Gionta's been dynamite since Day 1. Fitting in with Montreal has been smoothened by his reunion with Gomez, who incidentally, is shipwrecked without him. Gionta's return to the lineup has coincided with the acquisition of Benoit Pouliot, and thanks to his joining an already cemented duo, is finally showing why he was a fourth overall pick in 2005.

In many opinions, up until that foot injury, Gionta was considered the Canadiens best and most consistent performer. If you can imagine in Montreal, hardly a negative word has been uttered about the guy.

4. One of the more surprising stats regarding the Canadiens is that while they tied for 9th in the least amount of PIM/game with 12.0, they are third in the NHL in having the most minors with 214. Moreover, some Montreal players took some incredibly stupid penalties against the Devils back on December 16. What has the team been doing to try an improve their on-ice discipline? Are they even doing anything to address this issue?

Well, all you could say is that they are aware of it, but improvements rarely last more than one game. It's a bit of a viscious circle with the Canadiens. It starts with the high shot totals when they are not aggressive enough on the puck. Correcting that, invariably brings on the lack of discipline. If there is a penalty box parade then guess what?....up go the shot totals.

The revolving issue with this Montreal team is that it is not built to sustain puck battles over three periods. Up front, the skilled and feisty lack size, and competing with an edge often brings about the lackadaisical efforts that result in the lazy penalties. The tell tale stat is the number of calls that fall into the hooking, holding and tripping categories. The Canadiens are taking these penalties on the chase, from behind, and as a result of not taking the extra step at the right time to gain the proper angle on opponents. What gratingly nags, is the notion that you cannot teach a group what it is essentially unable to do physically. That in a breath is the Canadiens story over 48 games.