A Kiss For Stanley

Share All sharing options for: A Kiss For Stanley 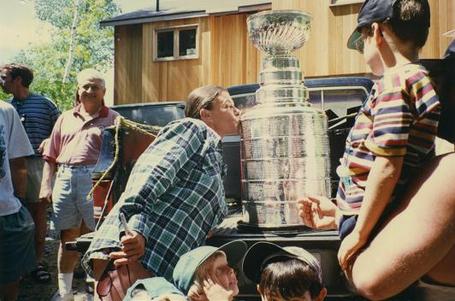 It is a story best told on Hockey Day in Canada after all!

It has long been noted that the upper regions of Ontario, to the northeast of Toronto and directly north of Peterborough, are perfect grooming grounds for future NHL players and hockey players in general. The vast, spacious areas of the province, from Parry Sound to Haliburton, where the outdoor games are played, are rich in smooth frozen surfaces, cold freezing temperatures and brisk winter winds.

The layout of inborn winter rinks and natural ponds would have you believe that Mother Nature is one die hard hockey fan.

Blue winter skies painted over a snowy canvas, with expansive splashes of hockey sheets make for an ideal and fertile breeding ground to set a young hockey player free, to stride and play for hours on end. 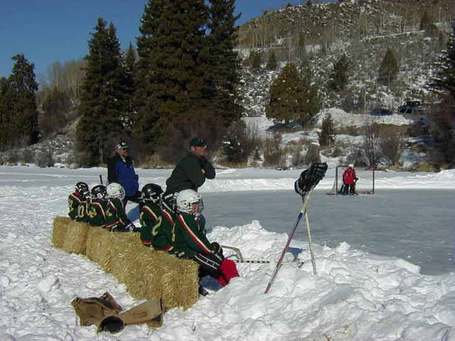 Some young players take a while to come around. That saying may be truer for Ken and Cheryl Riley than it is for most hockey parents.

The couple, married close to 20 years without children tried to start a family for seventeen years. They were not waiting, wishing and hoping on a hockey player, per se. A son or daughter along the way would have done just fine.

While all good things come to those who wait, the Riley’s, at one point, were told that children just weren't in the cards. They had tried. Explored options. Were disappointed. Sucked it up. This was what seemed to be meant to be, and they accepted it and moved beyond.

The Riley’s were busy enjoying the virtues of life nonetheless. Where they are from, and with their outlook on life, there are many. They travelled the country, and had recently returned home to the beautiful Esson Lake near Wilberforce when in the summer of 1996, August 3 to be exact, the Stanley Cup arrived in town, courtesy of Mike Ricci of the Colorado Avalanche. 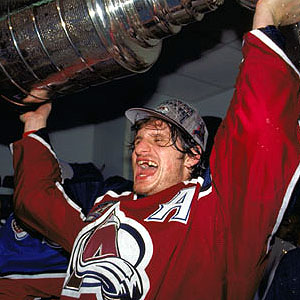 Ricci had recently bought land across the lake from the Riley’s. As would be the case with any NHLer moving into the surrounding area, it became a commonplace to see him around and about. Soon, one thing lead to another, and Ken Riley was part of a crew involved in building Ricci's deck.

The Riley’s are familiar faces about town. Cheryl works locally in the manufacture of fiberglass airplane parts. As manager, Zamboni driver and jack-of-all-trades at Wilberforce's Keith Tallman Memorial Arena, Ken soon learned that the Stanley Cup would be in town on that particular August day.

Ricci's personal day with hockey's Holy Grail is now a customary tradition, and included a hometown party with friends and well wishers later than evening. Sometime that afternoon, camera in hand, Ken and Cheryl walked to Ricci's place to snap a shot or two of Esson Lake's most famous visitor. As they arrived, the Cup was being hoisted onto a pickup truck's tailgate, with 30 local residents gathered around.

As everyone fully knows, the Stanley Cup is a photo opportunity in and of itself, often reducing the background to mere wallpaper. Cheryl did not wait to seize the moment, and posed kissing the Cup.

Later that afternoon the Riley’s enjoyed a boat ride and spent some time on the beach. They enjoyed a quiet Saturday night together, and everything seemed quite normal until Labour Day weekend.

Little did they know it, but fate had in store a surprise so astounding, that they should never truly get over the coincidences at play.

In short, what Mother Nature, fertility potions and full moons could not help accomplish, was taken care of in one fell swoop by the cumulative powers of Lord Stanley's mug.

One month after kissing the Stanley Cup at Ricci's summer celebration, feeling something quite stirring, Cheryl Riley discovered she was with child, the early rumblings of a future Pittsburgh Penguins fan in her belly.

The math, that particular calculus whose formula only a woman has the true secret to, told her that kissing Stanley on that fateful afternoon must have helped to trigger the perfect series of actions leading up to that rumbling belly. Tests proved her instincts correct.

Unbelievably, after all those years, she was pregnant!

Could it really be, that Stanley had become for Cheryl and Ken, what Aphrodite had been for Adonis?

Is such inspiration truly possible?

The following spring, May 6, 1997, Stanley C. Riley was born a healthy baby boy to his proud parents, including a slightly awestruck mother of 41 who never thought she'd see such a day.

Now, once aware of all the powers of fate, in complicity with the Stanley date, what does a mother decide to call this gift of son?

Well forget Jason, Ezra, William, Barney or Chuck. The boy shall be Stanley, no question!

However, it wasn't quite that simple, due to a lomgstanding Riley family tradition. Cheryl explains:

During the last weeks of pregnancy most parents mull over a few names. Ken and I had chosen Kirk for a boy and Kelley for a girl.

Ken's mom and dad named their kids with K names except his sister, Carol. Keith, Kenneth and Kevin were chosen for the boys. Keith named his two girls Keri-Lynn and Kailee. Kevin named his daughter Katie-Ann. Carol named her son Riley (the family surname) and her daughter Kelsey. So you can see where we were going with Kirk and Kelley.

However, a very good friend of ours had suggested Stanley but we shrugged it off in favor of the K names. Then I mentioned it in passing to our local paper's editor one day and she said that if we indeed did that, could she do a story on it? She loved the idea!

Ken's mother told us that his dad's grandmother's surname was Stanley. I also have a cousin named Stanley. The idea was there, but it wasn't until the baby was born and it was confirmed a boy when I heard Ken exclaim "Alright! Stan my man!"

I was just so glad that the baby was out! We had a couple of days in the hospital to decide and register the birth. But could there ever have been any doubt that this was perfect?

I ran into the editor in our favorite fruit market and the rest is, as they say, history. 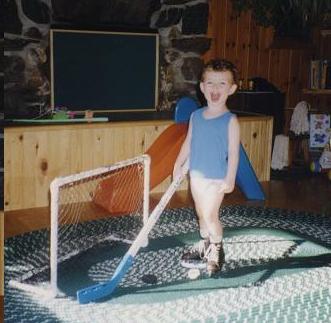 Above: Stan at 24 months, in his first pair of hockey skates.

Stan, as he prefers to be known, will be 13 in May. A one-time Maple Leafs fan, he cheered for the teams Ricci played on - San Jose Sharks, Phoenix Coyotes - before settling on the Penguins. He has been playing hockey since age 5. A longtime defenseman with the Wilberforce Rockets Seniors team, he occasionally takes a shift or two up front depending on team needs.

As can be expected, his name and how he came into the world has brought with it a fair share of infamy. It's understood that to be named after the Stanley Cup is but one thing, but to be named in good part because of it, attaches a whole other stretch of curiosity.

For Stan, a compassionate and fun loving teenager, dealing with it has its weird moments. Like any kid his age, there are occasions when the notoriety is exciting, and other times it's just old hat. Being that he is a well rounded youth with multiple interests does help keep him grounded and grinning when attention and notoriety find him. He takes it all in stride.

Newspapers, books, magazines and even a movie have caught up with Stan and his story. He has been the subject of numerous articles and publications, including Mike Ulmer's book "If the Cup Could Talk" and Lance Hornby's "Hockey's Greatest Moments".

Of course, Stan likely doesn't need to leave his front door to know he is special, as any loved individual is. Stanley Cup kiss or not, any child who keeps his parents in suspense that far into a marriage waiting for his tardy arrival will surely be cherished in every breathing moment. That he takes to life with such a zest for it makes his story all the more poignant. 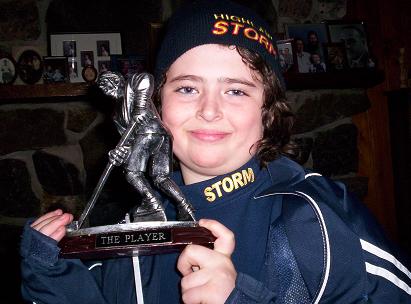 While hockey keeps him busy in winters, in summertime his sporting activities include baseball, soccer, swimming and floor hockey.

His talents go far beyond the sporting realm. He's played piano since age six, and is now tackling the saxophone with much success. Stan's intellectual side finds him enjoying math and science in school, although history and geography have yet to enlighten him much. Like every regular boy his age, there are video games during downtime, and Pokemon is just one particular passion.

The spring following Ricci's Cup 1996 conquest, the Riley’s found themselves in his company once more. A bonfire gathering gave the NHL star a chance to do some catching up with the boy he will, through the most serendipitous notions, forever be linked to. Balancing the baby bundle on his lap, Ricci explained to him the finer points of roasting marsh mellows and hot dogs. The moment still makes Cheryl laugh.

The locals are fond of Ricci, as Cheryl puts it, "When he comes up to his cottage there is always a genuine appreciation between Mike and Stan. It makes my heart sing and brings a tear to my eye. Guys like Mike make moms everywhere proud."

Since then, Stanley, the Cup that is, has returned to the Haliburton area a few times, most recently to the Legion in 2009. Cheryl had dared kiss it more than once, and the family made certain to pose with the shinning Cup, a bona-fide relative of the family. 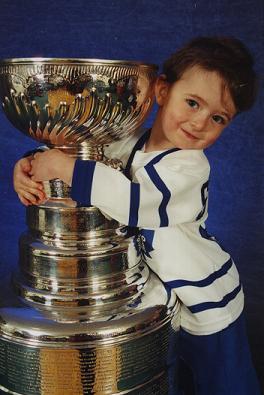 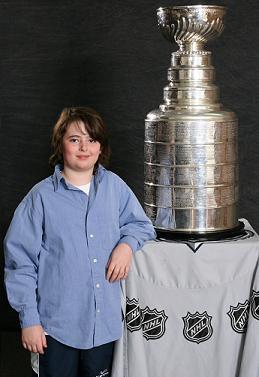 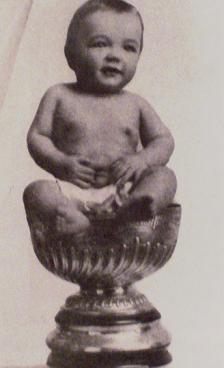 Above: Stan at age 3; the fun-loving pre-teen with his namesake in 2009; from 1916, George Vezina's second son Marcel Stanley, is posed in the Cup's bowl.

Ricci, who is now employed as an assistant coach in the San Jose Sharks organization, returns to the area every summer, often gifting Stan by autographing memorabilia. There's been signed Sharks underwear, Kraft Dinner boxes and numerous other assorted goodies.

One memento holds a special place. A copy of Ulmer's book signed by Ricci, that forever alludes to the connection that the family shares with the player and the Cup he brought to town that altered their paths and brought them all together.

The Cup winner, his scrawling, nail the truest of truths.

Indeed. A mother and father who believe in miracles agree! 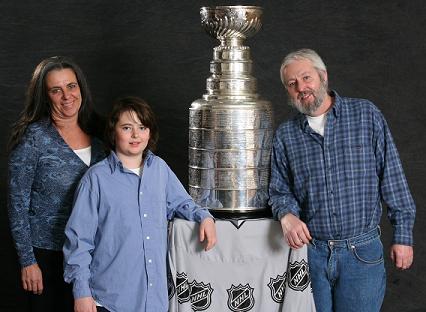