Share All sharing options for: The Mighty Atom Aurele Joliat Might Have Been A Senator Were It Not For A Cheapskate Offer

With this year's NHL All-Star Game held in Ottawa. We thought we'd dig into the archoves and pull up Robert and Francis' look back at one of the Ottawa area's greatest Habs legends.

Incredibly, the player who hailed from the New Edinburgh borough of Ottawa, came within a few hundred bucks of becoming an Ottawa Senator one year before his acquisition by the Canadiens!

More on that in a bit. 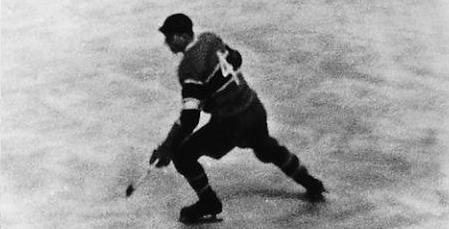 The player often known as the "Mighty Atom" and the "Little Giant" was a 5' 7'' whirling dervish, who weighed in at 136 pounds soaking wet. A reservoir of nerve and determination, Joliat ensured through a mighty vinegar that his limitations were but mere perceptions. As such, his lack of size, combined with his speed and agility, made him one of the game's slipperiest stars of his era.

Combining with the great Howie Morenz for much of his career, Joliat was the needle to Morenz' thread. Often incomplete, one without the other, they helped the Canadiens roar through the late twenties and early 1930's with a dashing style solidified the "Flying Frenchmen" moniker, even though neither were francophone.

A mite in a larger man's game, a story seemed to follow everywhere Joliat went. The tales told of, and by, Joliat were plentiful on the embellished side, and often dealt with how he'd been screwed over or how he'd put the boots to one and clamped the vice on another.

A showman in every sense of the word, Joliat understood that in many respects, that butter wasn't simply for toast. He'd use it to make some bread! 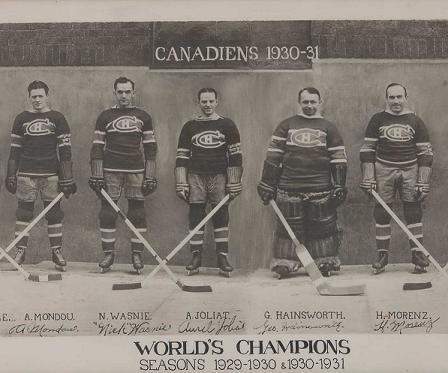 Fans of the game today likely have come across the name, but know very little of the character. In fact, if any hockey fans of today are acquainted with who Joliat was, it is most likely through the Canadiens 75th anniversary celebrations in 1984.

That evening, true to form, Joliat stole the show. While the Canadiens unveiled their all-time dream team, Joliat at 83 - the oldest living Hab, was invited to the festivities. The plan was for Joliat to skate a final lap on Forum ice, ending with a breakaway goal on goalie Jacques Plante.

Not once, but twice, the octogenarian spilled to ice. First in his initial strides, and a second time, almost on his own volition, as he skated directly over a red carpet on his way to Plante and on his way to endearing himself to new generations of Habs fans that likely never saw anything quite like it.

Less than two years later, Joliat would pass away. He was laid to rest at Notre Dame Cemetery in Ottawa, just blocks from the early New Edinburgh stomping grounds of his youth. 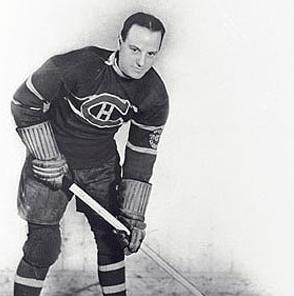 While researching material for the Canadiens centennial this past December, Francis Bouchard and I reminisced about that evening and the festivities surrounding the 75th anniversary dream team. It was in those conversations that Francis informed me of the existence of a VHS video celebrating the Canadiens 75 seasons.

I had never seen it, but the more Francis described it, the more I needed to see it. Piqueing my interest was the fact that it contained footage of Joliat at the time, as well as interviews with the former great. I just had to see this!

Soon Francis was sending me a composite DVD of the Joliat highlights, as well as the entire 75th anniversary video. Included in the package, was some vintage Habs footage from the Joliat era.

This was too good to be true!

The Joliat interview clips are interspersed below, here you can watch the 75th anniversary DVD in its entirety, and the presentation of the Dream Team is featured in three clips at this link.

At age 16, Joliat entered the Ottawa City Senior Hockey League, playing for the New Edinburghs and the Ottawa Aberdeens until age 20. His progression, prowess and his reputation was such, that he accepted an offer from a team from Iroquois Falls, Ontario, for an NOHA championship game as a hired gun or ringer, as it was termed in the day.

In that final, mobsters looking to make a hefty payday single out Joliat, the club's star attraction, and handed him a loot, if he would play lame duck and help throw the game. Joliat pocketed the dirty money - more stash than he'd ever seen in his life - but then went on to score six goals in the Iroquois win. He made his backdoor arena getaway, as he tells it, in full hockey gear, minus skates, suitcase in hand, bound for a train to Saskatoon.

He had signed a contract with the Saskatoon Crescents of the Western Canada Hockey League, but never dressed in the club's green and white unis. It is vaguely documented why that is precisely, but sometime between ending his association with New Edinburgh and heading west, Joliat had an encounter with Tommy Gorman, then GM of the Ottawa Senators. 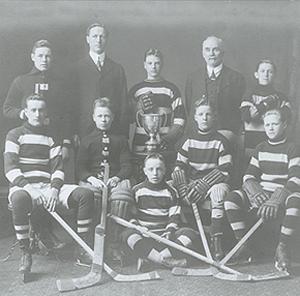 Gorman proposed Joliat a lowball deal - a $250 contract for a season as an Ottawa Senators spare. Joliat thumbed his nose at the offer and balked. The Ottawa GM then threatened to suspend Joliat from the pro ranks.

Joliat's reply to Gorman, was a simple, "Thanks for that, Tommy. Thanks alot!" as he closed the door behind him.

Gorman, a future Canadiens GM from 1940 to 1946, had powers and connections league and nation wide, and the threat to Joliat was that he would be unable to find a league anywhere in Canada to play in. The threat proved true, and Joliat sat out the entire 1921-22 season before the Canadiens acquired him a trade for Newsy Lalonde and had him reinstated into the NHL ranks.

Was Joliat suspended Canada wide for his refusal to sign a deal with Gorman and Ottawa, or did Gorman or another party arrange to have Joliat blackballed for having accepted a bribe late that season, regardless of the fact that he did not comply? Joliat recounts the meeting in which he was barred by Gorman. But there are two versions of the tale that collide and crash. Joliat has a penchant for embellishment, it has been known. In recounting the Gorman encounter in 1983, different interview clips have him upping the tendered amount to play for the Senators by one hundred bucks each time. What starts out at $250, become $450 two interviews later!

It is hard to imagine that the entirety of Canadian pro hockey leagues would throw Joliat under a bus over pure contract concerns. There had to be more to it, and that is where the Iroquois tale comes in.

Joliat, as it can be seen in the video clips, alludes to Gorman having him suspended based strictly on his refusal to sign with Ottawa.

It's a fun and curious watch, as Joliat regales with old time tales.

Just imagine how much hockey history would have been altered, has Joliat been offered a reasonable amount, say a respectable $1000 a season for starters, the going rate in the day.

Perhaps it would then be Ottawa, and not Montreal, with 24 banners hung high and proud!

Clip shows Joliat skating on the Rideau Canal, while he speaks of his first exhibition game with the Canadiens, in which Newsy Lalonde gains his revenge.

Reminiscing about Howie Morenz and the accident that later claimed his life.

A french clip, with Joliat describing what happened to opponents who dared knock off his leather cap during games.

Speaking about what a picnic it sometimes was to play with Morenz.

How it worked with Morenz on the same line.

Below, Aurele Joliat with the Leafs' Gord Drillon and Maroons' Baldy Northcott; his Hall Of Fame induction. 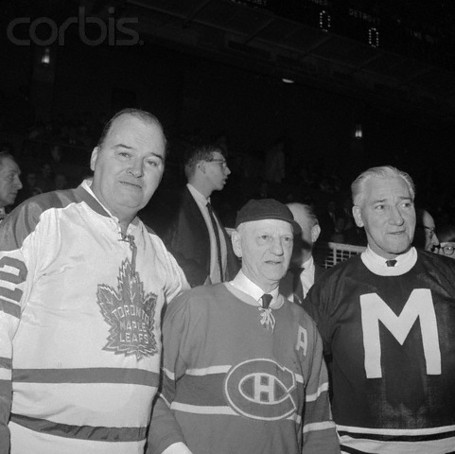 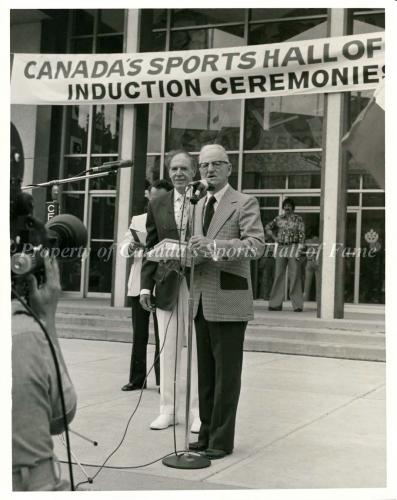