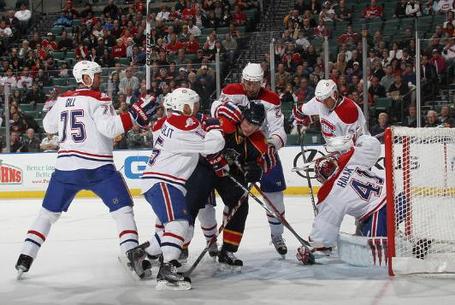 Sadly, I only caught about a period and a half in total of last night's game, so it would be a bit disingenuous on my part to weigh too heavily in on what by all acounts was a big slip back by the Habs in Florida. But I'll give you some thoughts to read nonetheless.

From the bits I saw, the Canadiens looked tentative and unprepared. I thought that they would appraoch this one like lions coming out roaring but instead it looked like they's used up all their killer instinct in the Rangers grudge match.

I'll take a calculated guess that the combination of rolling too many line variances, some player shuffling after two strong wins and a day at the beach might have buggered with the natural balance of things that were settling in well.

As I said, not seeing the full game it's hard to make these statements, but this team is still a fragile one in terms of confidence. Dull as the bits I saw were, I skipped the Express version and called it a night.

One player I have had my eye on of late is Maxim Lapierre, a player I have always liked who is having a brutal season in terms of refinding the role he prospered in last season. 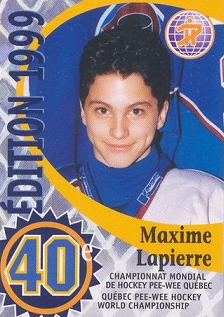 A question: With all the moves made by GM Gainey over the off-season, how well do you think Martin studied the players he had who remained?

Totally blown to hell were his evaluation of the Lapierre and Latendresse duo. These two should have formed the core of a promising third line, which is what they were one year ago. This season, did they even pay two games together on the same line? Add in that it took Martin twenty games to figure out that Andrei Kostitsyn is at home with Tomas Plekanec, Max Pacioretty's slipping back, and Sergei's retrogade to the minors and my call is that Martin didn't work hard enough to know what team he was inheriting.

With all the changes made, Martin should have paid closer attention to the players kept by Gainey. For all intents, what remains in place from last season's club are the goalies, Plekanec, Metropolit, Markov and Hamrlik and Andrei when he returns.

Getting back to Lapierre, a player cannot progress in the game when he arrives at the rink each day not knowing his role and his linemates. Put yourself inside his head and see what a messy place it must be.

It brings up a gripe about coach Martin, who I'll say I actually liked for just the second time this season, over the past weekend.

Bold statements and musings on Carey Price / Jaroslav Halak over the past week or so, coming from all angles of media. The guys must live for a day when they'll not be under fire.

Kevin at Ya! The Habs Rule covered it all well and weighed in and liked his reaction to Cassie Campbell's shotgun question to Jaro on HNIC. 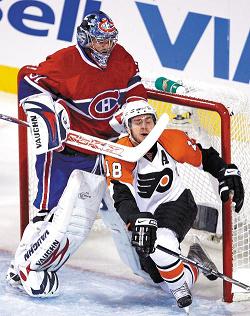 Talking with an old acquaintence of mine over the weekend, a rent-a-goalie named Rob from back in my (brief) beer league hockey days. A Bruins fan since Bobby Orr's reign, Rob is one of the few I've ever met without an actual hate on for Les Habitants. I once asked him for his All-Time Team, and it started out; Patrick Roy in goal, Orr and Bourque on D, I forget the rest.

Anyhow, I caught up with him Sunday and he uttered the most thought provoking notion from a goalie point of view I'd heard in a long time.

"You know how players sometimes play to get coaches fired? I can see it in body language when certain players do the same in regards to a goalie."

When I cornered him on specifics he said that forwards feign blocking shots, turning them into screens. A disguised effort he called it. He also said a tell tale is how defensemen react to goalies who enjoy playing the puck too often, noting that defensemen prefer the puck to be left for them without having to guess what a goalie will do.

"Watch the look on a defenseman's face the next time he's coming in to corral a loose puck that is shot past him by a goaltender."

One thing he semi-agreed with me on, is that the confidence defensemen show in a goaltender can be gauged by watching the nembers on their backs. In other words, from the camera angle, if the players are turned outward facing forwards at the start of a scrum, they are protecting a goalie with faith in him. Turned the other way, numbers to the camera, they lack faith in their stopper.

Lots to think about in all that. Not that I want to. 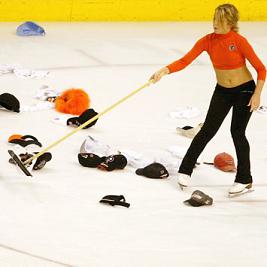 Do you have a pet peeve related to hockey?

Mine is a hockey term that really annoys, the so-called "Gordie Howe Hat Trick".

Now I get all Howe was about, in arguably being the greatest player of his era and perhaps of all time. I also think it cool that a goal, an assist and a fight should have a name.

Okay, so I'm compulsive and obsessive about hockey facts, but Howe himself had all of two Gordie Howe Hat Tricks in his lengthy career. Like shouldn't it be named after someone who actually turned the trick often enough to be worthy of the name.

Heck, a Tiger Williams Hat Trick would be more appropriate!

One day, I'll do the match and look it, but my guess is that Maurice Richard must have had a goal an assist and a fight a good dozen times in eighteen seasons. Hell I'd wager that he's fought and scored three at least a half dozen times!

So how about this, next time someone utters the misnomer, correct them. Say it often, bark it up.

And another thing, the hat trick origin does not trace back to the Guelph Biltmore Mad Hatters in 1947, as the NHL commercial attests. It began one year earlier, in 1946. Biltmore Hats in Guelph, by all accounts, jumped onto an already known idea.

The earliest account of a hat being awarded for scoring three goals is known to have occurred in Toronto when a local businessman, Sammy Taft, was approached by Blackhawks forward Alex Kaleta. According to legend, Kaleta entered Taft's shop to purchase a new hat but didn't have enough money. Taft arranged a deal with Kaleta stipulating that if Kaleta scored three goals as he played the Maple Leafs that night, he would give him a free hat. That night, on January 26, 1946, Kaleta scored four goals against the Maple Leafs and Taft made good on his offer. 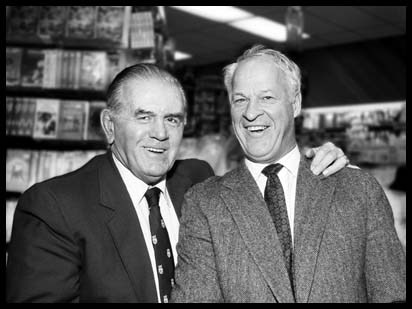 It's in the works

I'm not sure of the start date, but each team's highlight clips will become on site add ons in the near future. Ours will play vids from assorted Canadiens content, most likely highlights from recent games, news and notes. Word is that they will not be the cheesy Hockey Buzz ad derived annoyances, meaning they will play only when clicked on, thus not slowing down the page upload. Can't wit!