A Legend In Habs Sportswriting Journalism Hangs It Up

Share All sharing options for: A Legend In Habs Sportswriting Journalism Hangs It Up 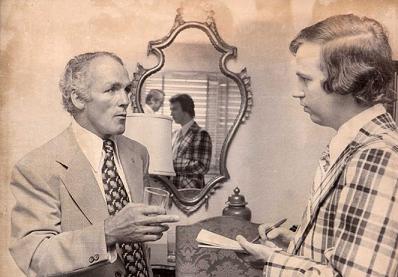 Bertrand Raymond of Rue Frontenac.com and former columnist and journalist with Le Journal de Montreal for over 40 years has retired, writting his last column just days ago.

While growing up, impassioned by hockey and the Canadiens in the 1970's, Raymond was my guru. When I craved information, understanding of the game, insight into how players and coaches and managers thought in hockey's big picture, Bertrand Raymond was my education on a daily basis for a good 20 years.

I've never fully admitted it here, but Bert was my idol in a sense.

For me, he disected the players minds, hearts and souls. He underlined and noted the way the game was and should be played. He scraped into the coaches psyche and unveiled the mechanisms behind the pulling of strings and primping of egos and pride. He parlayed the technical aspects of the game inro a common parlance all while appropriating what it meant to play for the Montreal Canadiens at that glorious stage in their history. 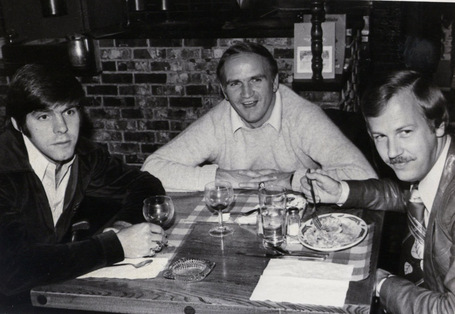 I basked in his work and ate it up, hardly realizing until adulthood that he'd shaped so much of my thinking when it came to hockey.

I've not always agreed with his viewpoints. While I always did understand his meanderings into the language culture and his notion that the french Canadian kids made for great Habs on occasion, I didn't enjoy seeing it pushed as an agenda in recent years. Bert, I suppose, was simply making sure we did not forget certain things he felt were truths.

Raymond leaves the printed page at a time in sportswriting history when the internet has merged the medium into something new and different. At the Rue Frontenac site, testimonials pour forth in tribute to the influence he's cast across a sphere of journalism in the province. He will continue on, reaching his audience via L' Antichambre from this time on.

I had the pleasure of meeting him twice although I'm positive that he had no idea who I was then or now. It was at last summer's NHL Entry Draft in Montreal wherein yours truly botched a glorious weekend by arriving at the event with an incompatible laptop and recording equipement that malfuncioned to the point of uselessness. What was anticipated as an enlightening experience for me, quickly turned into a botched neophyte learning experience, one that clearly showed that I certainly was no journalist.

On the way to finding out my recorder did not work, I stood in a scrum of journalists with microphones, interviewing first round pick Louis Leblanc. It's a scen many have witnessed. To be a part of it was something completely surreal. Mike Boone and Pat Hickey of the Gazette, Renaud Lavoie and Luc Gelinas of RDS and a good twenty other scribes spent a good 45 minutes stepping on each others toes to pose Leblanc a question or two. Luckily for me, Raymond isn't overweight.

There were maybe ten of us left when I finally had a chance to address the newest Hab. I didn't exactly have a question ready for him, seeing as all the best and most obvious ones were already asked, but just then Leblanc looked directly at me as if to suggest "Hey, you haven't asked anything yet!"

With Bertrand Raymond right beside me, I nervously blurted out something akin to his being the idol of every little kid in Quebec at the moment, before asking him who his favorite player had been growing up. I barely recall that his answer may have been Mike Richards and Sidney Crosby, oddly enough.

I didn't think much of my question, but at least I'd gotten to ask one. It felt totally weird! What truly gripped me was the sincerity in Leblanc's eyes as he directed his response back to me. He did not look elsewhere while speaking. That's a trait I will remember of him a long time.

Moments later, I discovered my recorder had captured all of four seconds of this. Bummer!

What helped salavage some of my weekend, was the following morning reading Raymond's column on Leblanc before heading up to take in day two of the draft.

I was astounded that Raymond had quoted me of all people. My question and Leblanc's response in part were in his morning article.

Someone pointed out that there were probably many young Quebec hockey playing boys embedded in his shoes right now, an allusion to the fact that it is always possible to caress one's dreams when one truly believes in them. Leblanc simply and humbly thanked him.

Later that afternoon as the draft wound down, I was making good use of the free goodies the NHL and the Canadiens organization set up for those with media accreditation in the backstage area when I happened upon Raymond a second time.

Recognizing me some, he nodded, and I thanked him for noting my question in his article. Speaking in french, he recalled me then as having asked it, and noted that it was good as it had elicited a different type of response than some run of the mill question.

I then asked if there were any chance that the Journal lockout would be ending any time. I told him that the paper was rather thin content without him.

He responded that I should stop buying it!

We talked a little more before heading our seperate ways. I was a really cool few moments. 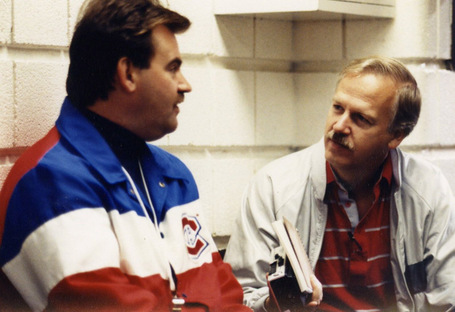 What bugs about his departure after being locked out of his job for a year is that how such a credit to his profession can be so ignominiously cast aside. The ending of his tenure is bitter tinged and that's just not how it should be.

Much has been said and written about the clash between the newer age sports medium and the main stream media. I read an enormous amount online everyday for free, but I still buy newspapers at the coffee shop because it is an irreplaceable habit I enjoy. I have no doubt that if sites like mine, and hundred better ones didn't exist, Bertrand Raymond would still be at his keyboard, translating the game into laymen's terms for us all to profit from.

I wish he'd stuck it out!

Photos in this article are from a gallery at his co-workers testimonials page. Scroll down to the small boy image and click to see more great behind the scenes shots.