Share All sharing options for: Martin's Mastery Behind Habs Humiliation Of Rangers 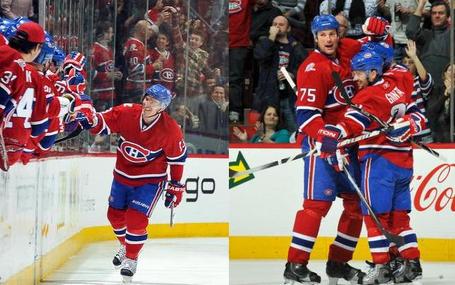 What a difference 48 hours can make!

Entering the weekend, the Canadiens were in 12th place and two solid wins later they are in a three way tie for sixth place.

This is the maddening thing about this Canadiens team. It's also what keeps the season interesting to a point.

To many a trained eye, these Canadiens have enough elements to be considered a playoff contending team, or better. What it takes is for 20 players to be on the same page for 60 minutes, something that has rarely been seen throughout the first 50 or so games.

With convincing wins in New Jersey on Friday, followed by a revenge routing of the Rangers Saturday, the million dollar question could well be what took this bunch so damn long to get it together?

That it follows on the heels of some of their most lacklustre performances of the campaign is a bit difficult to comprehend.

Could it be that the team sensed that they were being written off and reacted?

It cannot be the aftershocks of the club doing away with rarely used enforcer Georges Laraque, now can it?

Can it possibly be that since the injury to Andrei Kostitsyn that this weekend represents to first time that the team has been able to ice four competitve lines?

Or would it be coaching, the highly atuned variety of which Habs followers have rarely been treated to in 52 games? 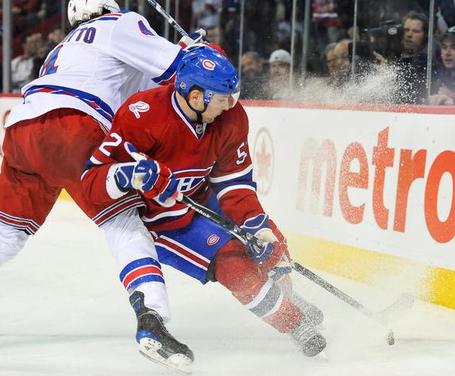 The return from injury of Sergei Kostitsyn, the callup of Mathieu Darche and the subtraction of Laraque provide a clearer four line focus than has been seen in weeks. It is something a coach can work with.

The acquisition and performance of Benoit Pouliot has also helped tremendously. Since he has joined the team, there has been little talk of secondary scoring from a second line, hence the sore spot being shifted to depth contributions from lines three and four. 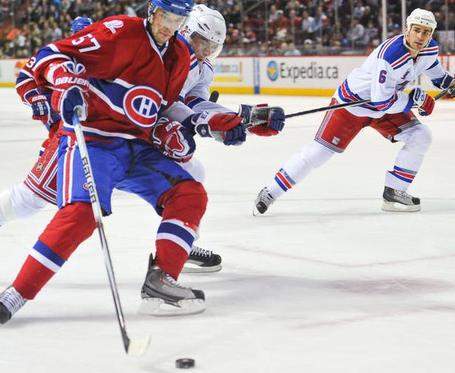 But still, something else seems finely tuned in the Canadiens game. They have played more alertly, battling harder than before, have cut down shots on goal, and are pursuing the puck with a fire in their eyes.

I have a strong suspiscion that Gainey has given the team a wake up call, in a verbal manner. We know that he met with Laraque prior to practice in Brossard and I am speculating that he's met with more than just his one exiled player. By all signs, I'd guess that Gainey has also had a talk with his coach as well, because Martin's approach in the past couple of games is unbecoming of his usual reserved style.

In short, what I like about it is that Martin is coaching more aggressively, and the team is reacting by personifying that approach. For one, line changes shift to shift are no longer stale and predictable.

So far this season, I haven't had a whole lot of great things to state in regards to Martin as a coach. I've not found that he's gotten a grip on this team's assets in a manner that said very much. The team's most memorable wins have come on the back of stellar goaltending when being badly outshot, and rarely have they put in 60 minute efforts. 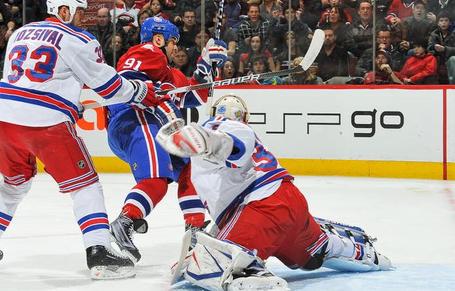 Martin is often a sedative when speaking, rarely allowing glimpses into his knowlege, which is assuredly vast. It seems to be a conservative style of game that he preaches, and while he often speaks of a puck possession style, the promise over 50 games has rarely manifested itself into anything that recognizes such a game.

I've rarely been on board with him, because he tends to coach a reactionary game rather than a proactive one. This Canadiens club was built to place opposing teams on the defensive, but rarely has there been evidence of that.

Over the weekend, Martin has surprised and apparently changed his tactics. Gone is the recognizable rolling of lines, and it has been replaced by a system that pushes his players to exceed themselves shift after shift.

It is also a game plan that for once does not work into the oppositions book of what to expect.

Martin has isolated duos of players he's mostly kept intact - Gomez / Gionta, Plekanec / Cammalleri, Pouliot / Gomez, Metropolit / Moen, Plekanec / Gionta - and assigned said duos a rotating variety of wingmen at pivotal points in games. Spotting players such Maxim Lapierre, Darche, Kostitsyn, Marc-Andre Bergeron, and Max Pacioretty with the above pairings has helped raise the stakes for each and every shift. Players now jumping over the boards are much more aware that something is there for the taking with every shift and it places the onus on opposing coaches to try and keep up. 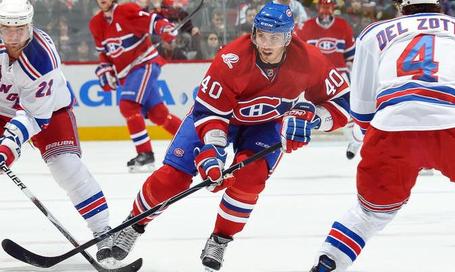 When momentum is called for, Martin has shortened the bench, rotating three lines at quick intervals. He's also managed icetime more evenly, especially on the second of two nights, and it worked to his advantage.

Against the Rangers, no Canadiens forward topped the twenty minute mark and none were employed for less than ten. Curiously, the shift lengths were also managed to acute detail, with all players spending on average between 40 and 56 seconds on ice per shift, save for Darche, whose sprints averaged 35 seconds.

Evidently, Martin is a much better coach without a dead weight fourth line. The addition of Darche, a seasoned pro at 33, and the return of Kostitsyn to the lineup, give Martin a better quality deck to shuffle. It is atypical of his usual rolling of lines, and it forces, especially on home ice, opposing coaches into a continuous guessing game. 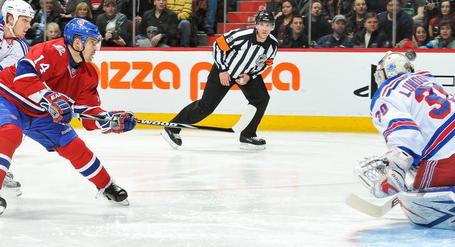 It's a luxury every coach loves to have. Matching lines against the Canadiens was a headache for Ranger coach Tortorella on Saturday, and he was often lured into deploying players such as Higgins, Avery, Voros and Boyle against lines in which they were outmatched. From the middle of the first period, the Canadiens had taken over the game. Their edge in play forced the Rangers to take penalties against an opponent with more zip.

In summary, the coach coached, and his players responded. The page taken was textbook Scotty Bowman, the master of line changes as chess moves.

There will always be legions of fans who bemoan tactical line juggling in games by coaches. It's a natural reaction by onlookers to the unrecognizable and the unknown. The reason coaches work the tactic is exactly for that same reason - it keeps opposing coaches off balance as well. 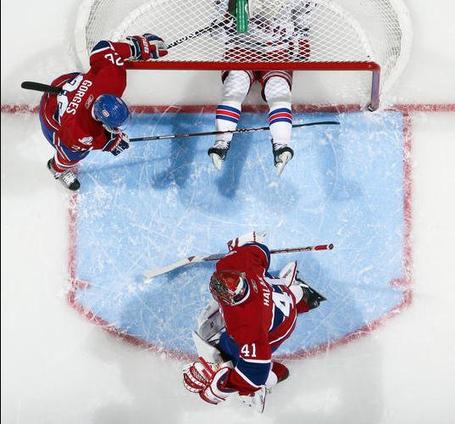 Imagine a pro scout filing and forwarding a report on this Canadiens game to be analyzed and disected in light of an upcoming meeting. Where do you start picking the team apart? When any of five wingers have been deployed with any of four centerman, it's a big muddy to figure out and plan against.

The aggressive deployment of player lines places opponents on quicksand, literally, and mistakes rapidly become cumulative. In this game, the Rangers were often caught up with line mismatches, and it forced them into penalties at crucial points in the game. They never recovered and gave in easily, after an early second period Canadiens assault.

It was an impressive middle frame the Habs played, and I cannot recall the last time I witnessed such killer instinct. The Canadiens wanted this one bad! 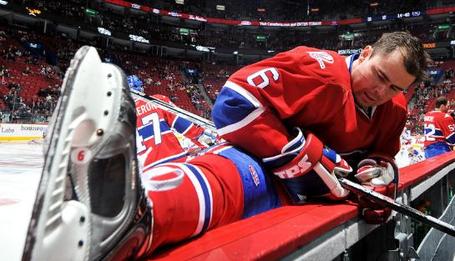 The Canadiens offensive assets, speed and combativeness, were on display for the better part of sixty minutes. Puck possession was achieved via aggressive and hungry puck pursuit for a change, which is the style of play this team must employ game in and game out to be successful.

By maintaining an accentuated pressure and presence in the Rangers end, Martin's game plan worked a marvel in that it allowed for goaltender Jaroslav Halak and his six defensemen to have a relatively easy night of it. In short, the puck pursuit agenda released the emphasis on the defensive pairings, unburdening them of sustained Rangers pressure in their zone. The forwards, more into the play than usual, came back with speed all game long. There were no passengers in this win. 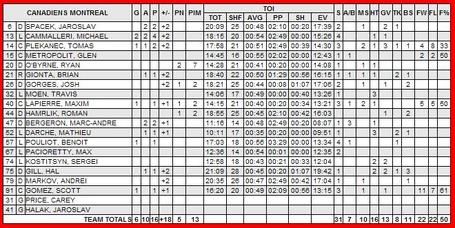 A most curious note, is that all six Canadiens defenders did not exceed 21:09 of ice time, a total reached, not by Andrei Markov, or Jaroslav Spacek, or by Roman Hamrlik, for a change. It was, oddly, Hal Gill's minutes for the evening.

You may recall Martin at the beginning of the season mentioning a Carolina Hurricanes defense in the 2006 playoffs in which all members shared an equally divided workload. This is the closest the Canadiens defense has come to personifying that ideal. If it can be kept up, it will be a strength going forward.

Additionally surprising to note is that of the Canadiens 13 registered giveaways during the game, only 6 were committed by blueliners.

All in all, it was a team win all the way, with great engeneering from behind the bench.