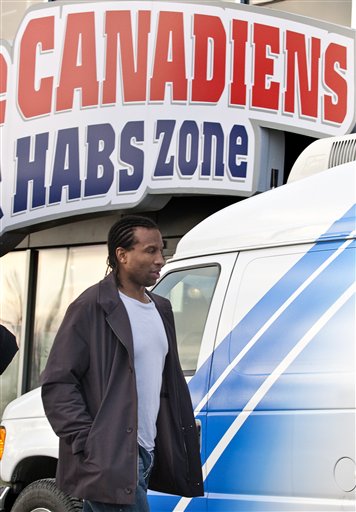 "Fly On The Wall" makes a long awaited return to EOTP. Not having been employed since the earlier rumblings of the Lecavalier trade rumours, in this episode 'Fly' is sitting in at Georges Laraque's home, with his canine Fluffy, his parrot Chirp and his rabbit Hop. Remote in hand, Georges is talking to himself constantly, dealing with a myriad of current issues and about ready to watch the Devils and Canadiens in New Jersey on RDS.

GL: Well boys, (Fluffy, Chirp, Hop) we, I mean they, er the Habs, almost never win in Jersey. How they gonna manage it without me, huh?'

Phone rings: "Hello, this is the Relief for Haiti foundation, we were wondering if you would be interested....."

Solicitor: "Yes, we are calling alphabetically."

GL: "No, I mean, this Georges Laraque, you know, of the Canadiens. Well I used to play for the Canadiens, like yesterday, and....."

Solicitor: "You're Georges Laraque. You just told me yourself, and your name is beside your number on this calling list."

Solicitor: "We were wondering, about Haiti, and if you would be interested...."

Andre Roy, translated on RDS: "The Canadiens are easy meat without Laraque. Like, if I'm playing 'em, who's gonna fight me - Travis Moen? Without Georges, it's party time. No ones gonna bother me all night."

GL: "That a boy Andre, you tell 'em. I still can't believe Gainey said I was an unproductive distraction. Like, what did I ever do?"

GL: "Ah that Tortorella clip again. Man is he pissed! Hey, I could play for Rangers! They need a guy like me with 'Brash' out. Maybe I'll get a call."

Georges take a seat on the couch as the puck is dropped and the Habs' lineup for the game is spread across the screen.

GL: "Sure! Dress Darche! Like that minor leaguer is gonna make a difference in my place."

GL: "I can see the headlines after this shitkicking. 'Habs Hit Laraque Bottom!' Hahaha!"

GL: "Alright! Moen and Salvador gonna go. Take him punk, he's got nothing! If it weren't for the code, I'd have minced that fool!"

GL: "Fluffy, it's commercial. That means tofu time. Come and get it!"

GL: "Hey, what the fuck's up with the fourth line?"

GL: "Mon, they miss me. I'm not there and they can't play the fourth line! Hahaha!"

First period is over. Georges calls the Green Panther, a vegetarian restaurant, to order a Kombucha.

Operator: "We're sorry, the number you have dialed is no longer in service."

GL: "Damn, like I ordered there just last week! Where did I put the numbers for Happy Cow and Juicy Lotus?

GL: "Mon, I can't follow your lines Jacques, it's like it's Carbonneau revisited! You're gonna confuse bud, I see it comin'. Who's da guy wearing 52?"

GL: "Come on Hop, last time you pushed that carrot under the couch I hurt my back getting it. No, that was my groin I pulled, I think. Don't do that no more!"

GL: "Jeez, who is this guy eh? Now he's got as many goal as me in two games. Dumbass lucky shit. Don't have as many assists as me eh, Chirp?"

GL: "Damn bird, if I had a cat I'd grab ya by those winpy wings of yours and feed ya to him."

GL: "That's it you useless parrot. No more seeds for you. You can eat newspaper and feces for a week, smartass!"

Canadiens are controlling second period, not much offered up to Devils

GL: "Devils are playing possum without Clarkson. Mon, who's gonna fight who, eh?"

GL: "Mon, I've gots ta eat something. What the heck, haven't had a good burger steak since freaking forever. Just one. That and a roast beef sandwich. Yeah, burried in gravy. Who'll know?"

GL: "Shits. All outta bottled water. Hafta drink this Octane crap I guess. Ah, what the fuck, not like I'm playing tomorrow night."

GL: "Yeah that's Bob, telling I'm traded to Detroit or Chicago. Maybe Pittsburgh again. I can feel it in my bones, mon!"

Restaurant: "Hello. Just wanted to confirm your order. That was a family sized chicken wing platter, three smoked meat sandwiches, a cold cut platter, one order of filet mignon, a side order of bacon, crispy fries and three diet Cokes?"

GL: "I don't get it Fluffy. Nobody is getting bullied or shoved around much. Kinda boring eh!"

GL: "What the heck happened to lines, mon? I don't recognize nothin'. And no fights, no bull ta clean. Dull, mon, just dull."

Second period ends with Canadiens up 2-1.

GL: "Jersey's gonna come out roaring. I feel it Fluffy. How 'bout you Hop? Chirp?"

GL: "Yeah whaddaya you know, bird without a dick?"

Third period begins just moments before Georges' order arrives at his door. He opens the platters and...

GL: "Ayoyeyoy, this Octane crap makes ya piss like a fire hydrant."

While Georges is away having a leak, Fluffy and Hop dig into and chew away at his opened chicken, bacon, filet mignon and smoked meat platters, dragging and scattering them across his living room floor.

Georges looks up to see D' Agostini fighting the Devils' Mark Fraser, and reacts by whomping his dog Fluffy across the skull with his rabbit's carrot.

GL: "I'd take you to a whole other area code, fucker! Soon as my back stops hurtin', my groin heals up and I drop a few pounds, I'm gonna give ya a yoga lesson you'll never forget!"

Cammalleri scores for the Canadiens, now up 3-1

The Canadiens surprisingly snuff out the Devils in the final half of the third period. Although outshot in the third period, goaltender Jaroslav Halak holds fort. A Habs power play helps set the tone as Montreal shuts down Jersey as the game winds down.

Laraque finds a memo reminding him to set VCR to tape "Hope For Haiti" telethon.

GL: "Mon, gotta call my agent, find out when that telethon is on."