Habs Survive A Dreaded December, Can A Second Half Thrust Be Far Behind?

Share All sharing options for: Habs Survive A Dreaded December, Can A Second Half Thrust Be Far Behind? 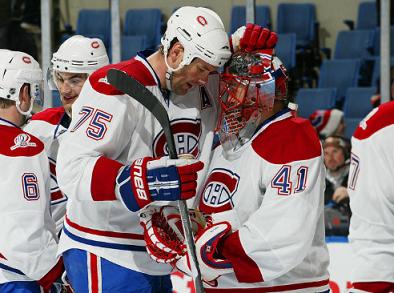 When the Canadiens 2009-10 schedule was released last autumn, the first thing to catch the fan's eyes was the compressed dates for the month of December. Prior to seeing and judging the worthiness of the new retooled Canadiens lineup, and without possibly knowing that an unjury would fell defenseman Andrei Markov in the first game of the season, December was considered an obviously crucial month.

As if the 17 games in 31 nights weren't enough to render December a dreaded month, it also featured four sets of back to back games, and 11 road games, including a season high seven game road swing to close out the calandar year.

Once December hit, the Canadiens owned a 12-12-2 record and has just lost three of four games. The prospects for a very determining month did not look good when the Canadiens lost their first two games in December; a listless 3-0 shutout at the hands of the Maple Leafs at home on the 1st and a 6-2 pounding in Buffalo on December 3. 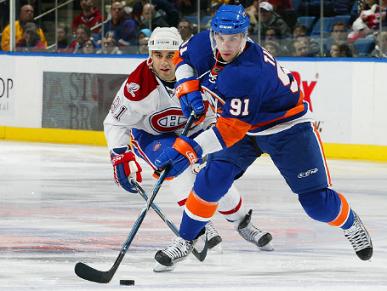 Fear and apprehension were at their worst on December 4, the date of the Canadiens centennial game against the Bruins. Elongated ceremonies have rarely served the Canadiens well, and this was the all-time biggie. Perhaps inspired by the multitude of legends on the Bell Centre ice that night, the Canadiens surprised, and routed the Bruins 5-1.

It may still be too early to judge, but that pivotal contest may well represent a turning point of sorts when this season is in the books. A win one, lose one team playing .500 hockey until then, the Habs have since gone 9-5-1, gaining 19 of possible 30 points since the centennial game. 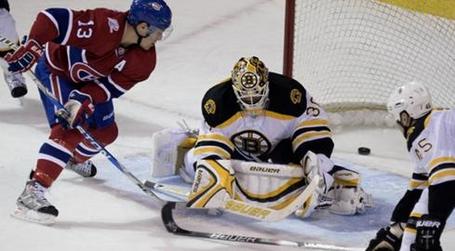 While their play has been far from perfect, they did win 10 of 16 points in those four sets of back to back games, and ended the month by going 6-1 on the seven game trip.

The dreaded month produced great individual player storylines as well as some very dislexic hockey at times. It produced streaks of three wins, followed by five straight losses prior to hitting the road and winning four straight. A loss in Ottawa where the team looked as tired and uninspired as it could, was followed by two wins in the state of Florida, an annual graveyard for Habs losses in recent years.

All told, in December, the Canadiens went 9-7-1, outscoring their opponents 48-43. They saw their penalty killing unit gain some teeth and rank in the top 10 (currently 9th), and witnessed the revival of their proficient power play (currently 1st), which once again became the most feared in the league. They won four games by one goal, including three in overtime, and won five games by more than a goal. Their home ice record, a sub par 2-4 was overshadowed by an excellent showing of 7-3-1 on the road.

As the new calandar year dawns, the Canadiens have played the most games of any team in the league. Such a detail is significant with the compressed schedule of an Olympic Year on the horizon. The Canadiens have 39 games left to play, with 22 of those contest on home ice. The situation, on a currently healthy club, bodes well for the second half.

Prior to December, the Canadiens had fallen as low as twelfth place in the standings. They are currently in seventh, playing leapfrog with the Ottawa Senators for sixth place. With a healthy run of wins to compensate for the games in hand the teams chasing them own, the Canadiens should place themselves in a position to have their destiny in their hands.

As it stands, the Canadiens are a point behind Ottawa, two behind the Bruins, and seven back of Buffalo. They have two games remaining with the Senators and three each with Boston and the Sabres. The final week of their season's calandar sees them play the Islanders, Hurricanes and Maple Leafs. 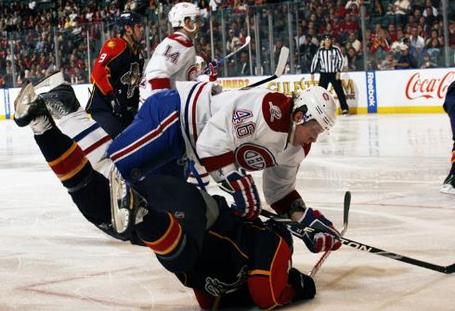 They were seven key players for the Canadiens during the month of December and their performances individually can be directly linked to that one the team.

First and foremost, are goalie Jaroslav Halak and center Tomas Plekanec, who are playing the best hockey of their careers. No less important, but in a somewhat more veiled role, were the contributions of Andrei Markov, Andrei Kostitsyn, Scott Gomez, Mike Cammalleri and Marc-Andre Bergeron. 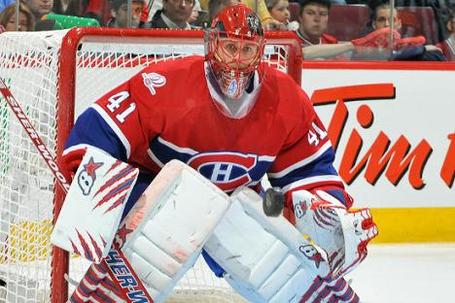 Halak faced an enormous amount of shots during the month, and became the backbone of the club, especially during the final road stretch. His performances were not only worthy of an NHL first star of the week award, it can also be considered that with such stellar showings, he has jumbled the goaltending future picture in Montreal in his regards to his participation beyond this season.

During December, Halak's number were extremely solid. He went 6-3, with a goals against of 2.67 and a save percentage of .935. He often faced a barrage of over 40 shots per game, and was credited with stealing at least three wins on the final trip.

Plekanec, has been nothing short of a revelation. A question mark before the season started, he has not only assumed the role of the team's top line center, he has become one of the top players in the NHL and is currently seventh in scoring and second in assists. His role on the Canadiens is a many tentacled one. Plekanec mans the power play, plays on the first unit of the penalty kill, takes many of the team's important faceoffs and plays head to head minutes against the opposing team's top lines and best checkers.

After being shut out in the month's first two contests, Plekanec went on a rip with 4 goals and 17 assists in his last 15 games. On target for close to a 90 point season, Plekanec's best performances during December coincided perfectly with the team's better games. In six games in December, Plekanec was held pointless. The Canadiens lost all six. In the 11 games he pointed, the Canadiens record is 9-1-1. 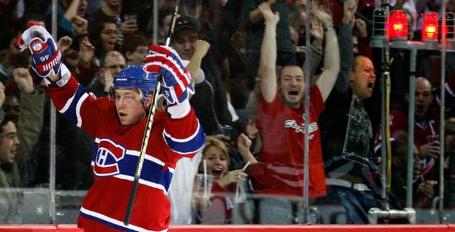 Kostitsyn, playing with Plekanec, was revived during the month after 25 games of slumber. His play has given the top line a second sniper, thus allowing Plekanec to become more efficient. The team's top goal scorer for December, Kostitsyn has been consistently going to net and scoring key goals.

With opposing checkers perhaps drawn to Mike Cammalleri's side of the rink, Kostitsyn learned to use the added space to his advantage. At one point, Kostitsyn had added 9 goals and 3 assists in a ten game span. As Plekanec's wingers, Kostitsyn (10-5) and Cammalleri (8-6) also pointed in 11 games during the month. From the Boston game on December 4, the trio have accounted for 22 goals, 28 assists and 50 points. 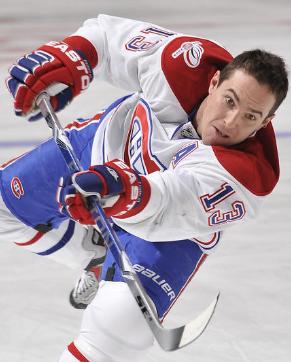 Cammalleri got things rolling with a hat trick in the Centennial Game. A scorer known to produce in spurts, he continued to contribute with four and six game pointing streaks during the month. 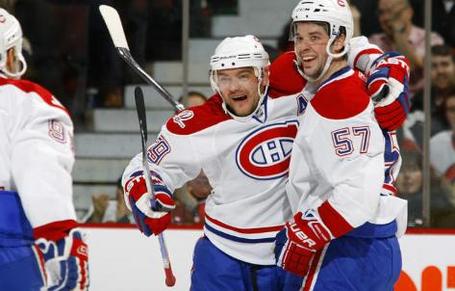 Andrei Markov's much anticipated return to the team on December 19, paid great dividends immediately. Timed to coincide with the club's seven game trip, Markov kicked things off with a pair of goals, helping to launch the trip with a shutout win over the Islanders. Not long after his arrival back on the scene, his game minutes were back up to his usual mid 20's contribution. Additionally, his vision and passes were key in giving the Habs' much vaunted power play an extra kick.

In the month's first ten games without Markov, the power play counted for 4 goals in 29 chances, a conversion rate of 13.8%. With Markov's contribution in the final seven games of the month, the Canadiens PP hit paydirt in five of those games, going 11 for 24 in overall chances, for a 45.8% conversion rate. Can one player make such an impact? 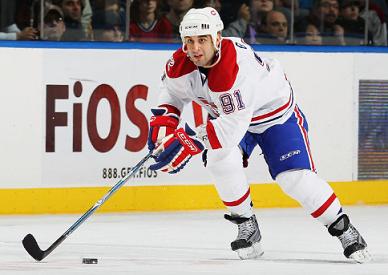 Scott Gomez. more and more, is beginning to look like the player the Canadiens traded for back in June, On pace once more to top 40 assists, Gomez began to find his game while paired with Sergei Kostitsyn following an injury that caused him to miss four games. Missing line mate Brian Gionta for 21 games, Gomez had slipped into a fogged funk that saw him play uninvolved perimeter hockey for a dozen games.

With the team starting to win on the current trek, Gomez refound his game, and then his favorite line mates. Newly fitted with Benoit Pouliot, the team's newest acquisition, the Gomez line ended the month as the Canadiens strongest. Gomez is currently on a five game point streak, totalling a goal and eight assists in that span.

Bergeron has been a bargain bin bonanza. Signed off the scraphead to compensate for the loss of Markov, he's been nothing but a boon offensively. One of GM Gainey's most alert moves, Bergeron's shot and passing skills with the man advantage helped keep the Canadiens afloat and in many games they had no business being in. His diminutive stature combined with a bullet shot, make it believable that Mark Streit and Sheldon Souray had a baby and abandonned it in a puck bucket and left it at 1260 Rue de la Gauchetiere.

The power play specialist contirbuted 10 of his 11 December points with a man advantage. Included in those 5 goal and 5 assists were two game winners, including a spectacular overtime winner against Atlanta on December 21.

In singling out these seven particular individual performances, it should be noted that several players either put in consistent efforts or raised their game to a higher level. Names that come to mind immediately are Glen Metropolit, Roman Hamrlik, Sergei Kostitsyn and Carey Price, who were all in the shadows, but contributed subtle and timely heroics. 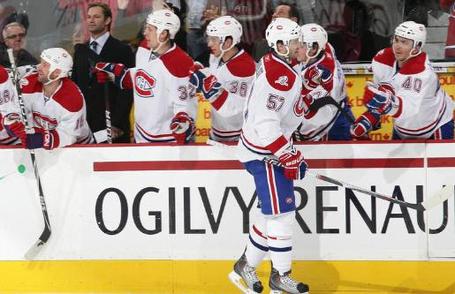 Often playing in unsung roles, were Travis Moen and Hal Gill, whose work on the penalty kill cannot be emphasized enough. Moen is almost always perfectly placed, eating up laneway and delivering physicality when opportunities present themselves. The poise he presents to puck carriers are a reason why opponents fire so many shots from the perimeter. Gill, on the other hand, is a virtual octopus near the crease. His reach and flat out spread limit chances, as he used his elongated frame in the manner of a second goaltender. Stoppers playing behind Gill often only need to concern themselves with shots to high corners.

In regards to the Canadiens' goaltending, the December spotlight and accolades have tended to shine most vividly on Halak at the moment. While his strong play has represented the Canadiens brightest spot this month, it shouldn't be simply assumed that carey Price has not been up to par. In fact, their performances stand up to comparison when considering basic variables. 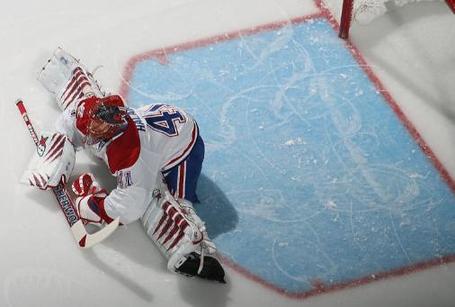 Below, is a simply statistical listing of ten categories that reflect their performances. Certainly, Chris Boyle's upcoming December look at the Habs' goaltending will be much more in depth. What follows are the numbers for each goalies' record; the shot total by the Canadiens when each was in goal and their game average; the total shots on goal by opponents and average per game; total goals for by the team in games that each played in and average; total goals against and average; save percentages for the month and current GAA and SVP.

This is not done to debate the merits of each goalie over the other, but simply to point out that the Canadiens have a very luck problem on their hands. 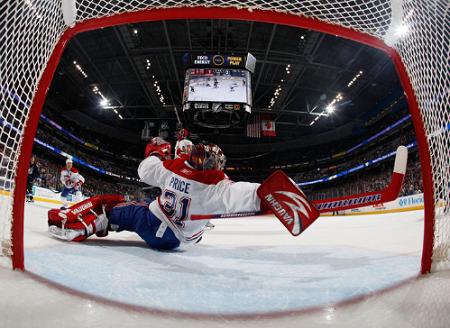 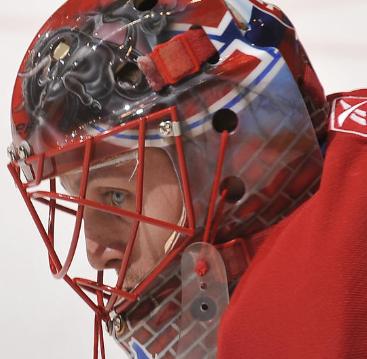 Goaltending plays a large role in penalty killing, but not so much on the power play. However, a team's proficiency on the power play can definitely affect goaltending records in terms of wins and losses. Here are some telling stats: 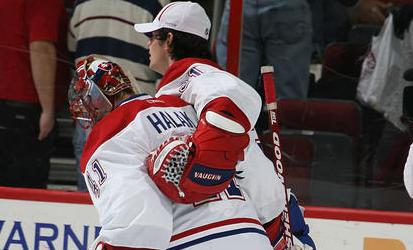 Here is a more detailed breakdown of the past 17 games, noting the scores, the top line's contribution, the shot totals per team, the power play stats and links to each game's boxscore. 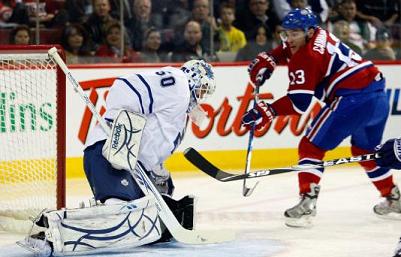 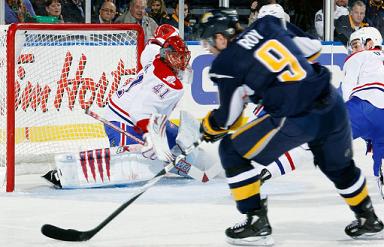 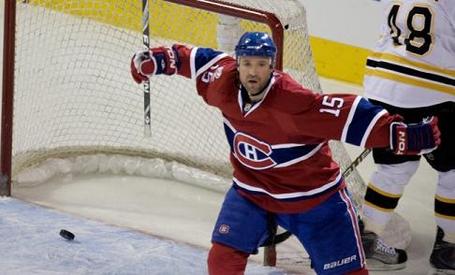 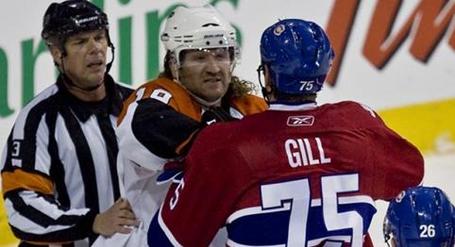 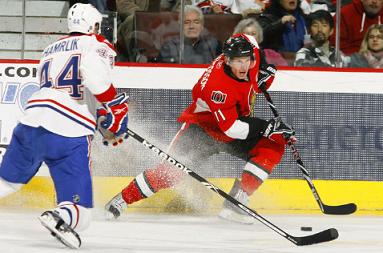 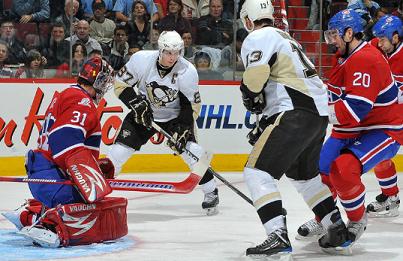 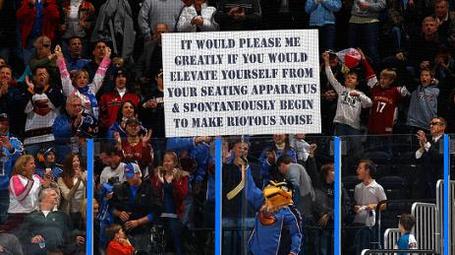 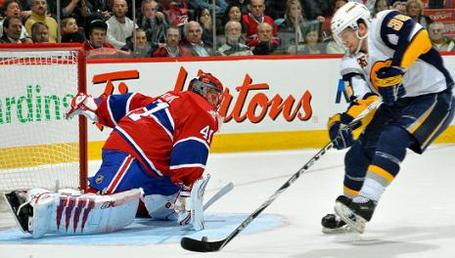 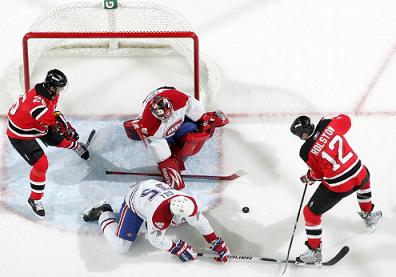 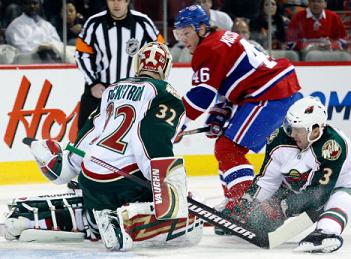 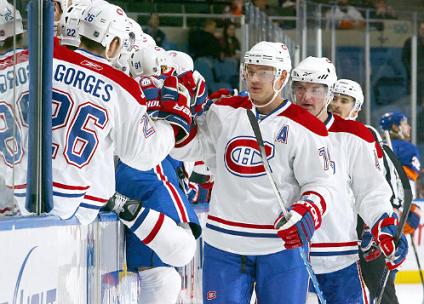 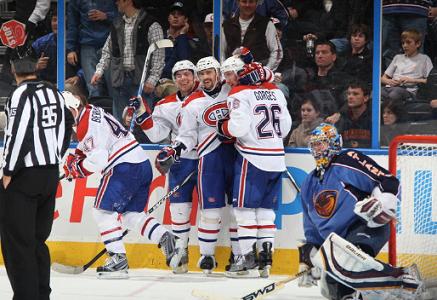 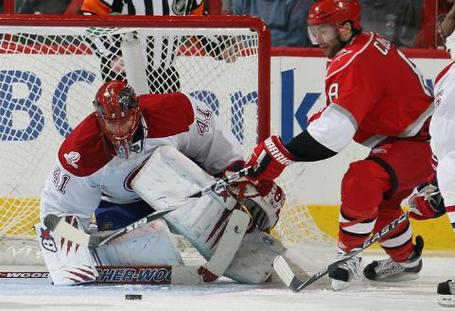 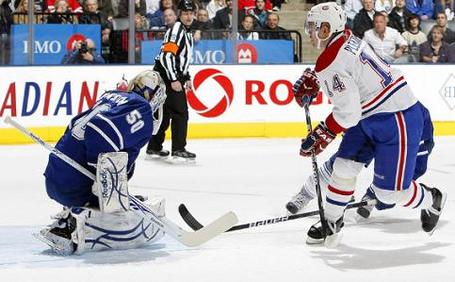 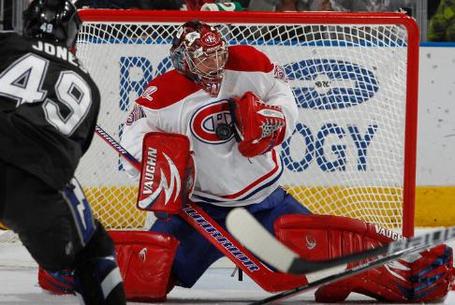 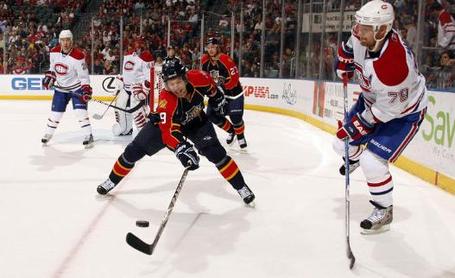