The Canadiens missed an opportunity to climb in the Eastern Conference standings with a poor and unconcentrated effort against an opponent that appeared to be easy prey at game time.

After a somewhat strong first period, it seemed the Canadiens lost sight of what was at stake in the contest. For all intents, it didn't seem they were prepared for what they face when meeting Ottawa. Beyond the 20 minute mark, it was an unqualified mess.

Fifteen turnovers in the second period attest to Ottawa imposing their will upon the Canadiens, and that is something that should not happen to the Canadiens on home ice. 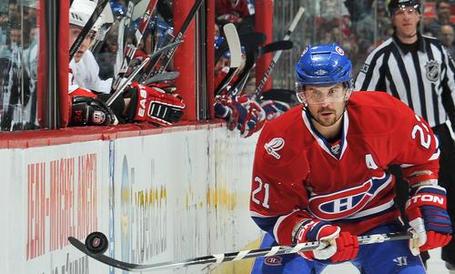 Watching this game with a sinking feeling early on, the fleeting tone of the game brought several questions to mind.

A first sign of worry came midway throught the first period, when the line of Maxim Lapierre, Georges Laraque and Marc-Andre Bergeron cause the Senators fourth line to ice the puck.

With the Sens pluggers set to remain for a faceoff in their own zone, I was baffled that coach Martin did not counter with either of the Gomez or Plekanec lines. Like, isn't this what an alert coach waits for in matching up line combos? Didn't Martin see a chance to gain an upper hand? Why would he be satisfied with the status quo there?

Carey Price was average at best in this one. It doesn't help that the defense runs around like headless chickens, but it's key that Price doesn't immitate them and overplay the puck as often as he did against Ottawa.

If the playoffs were to start tomorrow, who wouldn't put a wager on Halak getting the call? 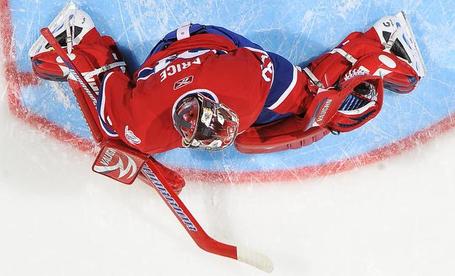 Are you getting the feeling that with Markov's return, Bergeron's role has become rather redundant?

I'm not terribly impressed with his work on the fourth line, but before I'd toss the towel in, I'd like to see him given some shifts with Plekanec while Andrei Kostitsyn is out.

On the power play, as good as it often is, at home the Canadiens do not seem to work at penetrating the box very much. The play sticks too much to the perimeter, where all of Markov, Bergeron and Mike Cammalleri work. When the shots go wide, as they often did in this game, the Canadiens are doing the Senators work for them.

Benoit Pouliot can't win. He gets his fourth goal in five games, which makes his acquistion look better game by game. Unfortunately for him, Guillaume Latendresse will surely be named player of the week. He notched a hat trick in a loss to Phoenix this evening.

I don't want Montreal to ever trade anybody ever again!

Shouldn't we be thankful that Roman Hamrlik and Jaroslav Spacek weren't selected to the Czech Olympic team?

Each had four turnovers tonight, and they played like they had eaten another dozen pre game. Tired isn't the word to describe how they appeared at times. That said, Markov was a fat minus three, and as predicted, is struggling somewhat after an initially strong return.

What do you think? When a team has 30 giveaways, do you feel it points to a poor game preparation?

Occasionally, I see similarities between Max Pacioretty and Pouliot in terms of ability, size and role. With that in mind, why not have Max take a few shifts with Gomez and Gionta, and sub Pouliot with Plekanec and Cammalleri? Might be a creative way to catch opponents off guard. With Pouliot the closest forward to the boards for the first and third periods, that little line switch trick would throw a curve and perhaps spark the team. 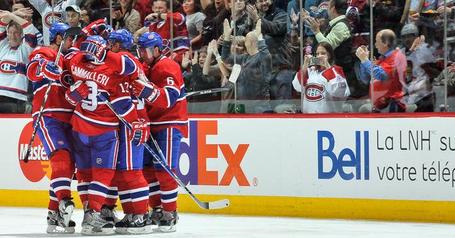 Some folks get totally frustrated when coaches constantly mix line combinations, but it is often where coaches gain an edge and get the matchups they favor. What could be easier than coaching against Martin, who consistently seems to roll four lines and makes adjustments that commentator Benoit Brunet can predict two periods earlier.

Cory Clouston is a sly coach. He has to be, to get an injury riddled team to play its best. His team wrestled this win away from the Canadiens, almost exactly the way it did the last time these two teams met. Sometimes, coaches should be named a game's first star.

Perhaps some of all this explains getting that sinking feeling early in games. It comes with sensing that teams can see the Canadiens coming from miles away.