An Outdoor Habs Practice? Not Likely To Happen In This Day And Age

Share All sharing options for: An Outdoor Habs Practice? Not Likely To Happen In This Day And Age 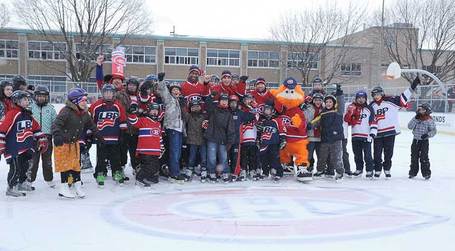 The Canadiens organization recently announced that a second multipurpose outdoor rink has just been completed and opened in parc Le Carignan borough of Montreal in the north end of the city. The team's official site has all the info here.

A few players were on hand, and judging by the pics, one gather the additional ice time did George Laraque some good!

The endeavor, four outdoor rinks in all, is a commendable one and something that all NHL teams should seek to do. The Canadiens tie it in to something they call the Bleu Blanc Rouge Program, which is an outlet of the

Montreal Canadiens Children’s Foundation. The rinks are located in needy areas of the city, with the intent that those unable to afford hockey regstration can still hit the ice, play and work on their skills. 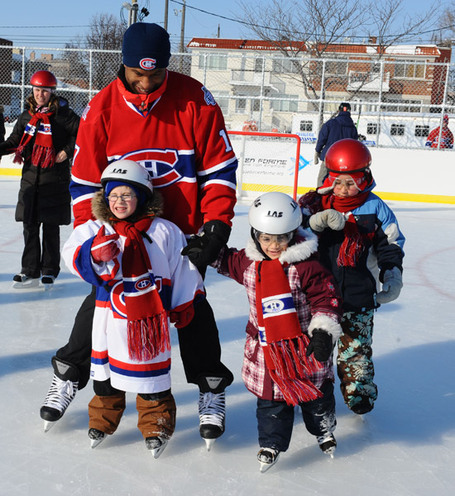 That is, until one considers the crowd such an event would gather. Perhaps it is unrealistic in this day and age, with the Canadiens more popular Jesus (didn't Lennon get into some heat for a similar claim?). If the Habs were to hold court at Le Carignan and have it announce, traffic jams would be just the beginning of their worries!

The idea comes to mind from a simpler time, when the Canadiens were likely still then very popular, but not as sought after in terms of the public.

Back sometime around 1925, the Canadiens held an outdoor practice at Parc Jeanne Mance, just off Avenue de l' Esplenade and Mount Royal. The photo below was taken from that event, and you can see that it was sparsely attended. 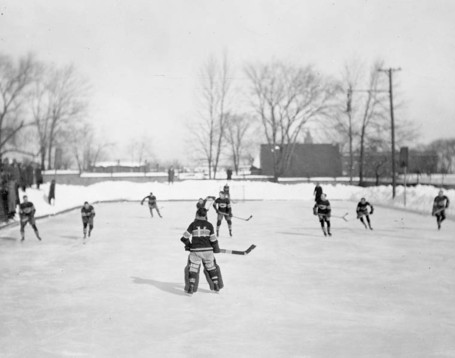 The photo is a still from a film made by someone, and the clip later came into the hands of Canadiens manager Leo Dandurand, who had it aired on television in the 1950's. Whoever saved it for posterity did hockey history a favor, as it is surely the oldest moving pictures of the Canadiens on record.

The clip, unfortunately, has no exact known date. Or I should say, I'm unfortunately unable to track it. It came to me courtesy of Francis Bouchard, and if you enjoy these flashbacks, keep your eyes peeled here in the coming days for some truly interesting footage concerning Aurele Joliat.

It is either from the 1924-25 season or the following campaign. As can be seen, the setting is most definitely in the mid winter, as snowbanks alongside the rink are quite high. What confuses most are the players said (and seen) to be included in the clip.

One shot shows Leo Dandurand laughing it up with Sprague Cleghorn, whom he traded to Boston on November 10, 1925. The clip mentions Georges Vezina in goal, but the goaltender wearing number 11 is Alphonse "Frenchy" Lacroix. Vezina faces the camera in the clip. Lacroix was part of the club for practice purposes during the 1924-25 campaign, but was not signed until November 8, 1925, two days prior to the trading of Cleghorn. As the clip is spliced, it is difficult to ascertain if they are all of one piece.

The narrator is Quebec television personality Zotique L' Esperance, and at one point he notes that one of the defenseman is Albert Leduc, who joined the team for the 1925-26 season.

The second part of the clip features Morenz and the Canadiens at the opening game at Madison Square Garden on December 15, 1925. In the clip, Howie was wearing the unfamiliar number 6 he wore for his second NHL season only.

Here is a translation of what is being said in the clip.

We would also like to salute former players, who have contributed to implanting and developing the game of hockey.

Mister Leo Dandurand, our popular sportsman, has unearthed old film clips for us, from 1925 to 1930, and we are happy to show them to you.

Let's have a look at a practice of the Canadiens hockey club at Parc Jeanne Mance in 1925.

Here is George Vezina in goal, the most famous of goaltenders who passed away only months later.

Howie Morenz (7) facing off, at the opening game in Madison Square Garden history in 1925. The Canadiens beat the New York Americans 3-1, and Albert Leduc scored the first goal. Morenz was then wearing the number 6, instead of the number 7 he would make famous in the future. There's nothing slow in this game!

The art of filming hockey games in this era, was just beginning.

And so it was!