Pouliot At Home With The Canadiens

Share All sharing options for: Pouliot At Home With The Canadiens 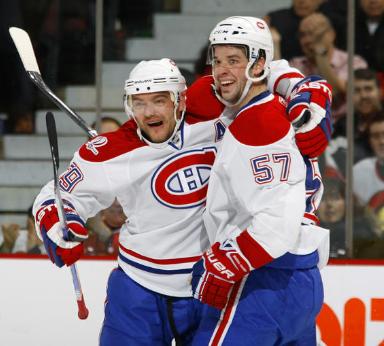 In the next few home dates at the Bell Centre, one just might begin the see jerseys worn by fans proudly adorned with the number 57 on the back.

Benoit Pouliot, once a disappointing high draft choice for the Minnesota Wild in 2005, is beginning to display the multitude of reasons why he was selected fourth overall in that summer session's draft.

Large and very mobile, Pouliot has a nose for the net and hockey sense to spare. Immovable in crowded areas, his deft touch has produced regular numbers since finding a home on a line with Scott Gomez and Brian Gionta.

With the Wild, it was only on rare occasions that his offensive instincts and physical attributes were on full display, but since coming over to Montreal in the trade that sent Guillaume Latendresse the other way, fans have been pleasantly surprised to discover his prowess.

I, like some others, was not pleased by his acquisition initially, focusing more on the disappointment of favoured player being dealt. The perception at that moment was far from seeing that the Canadiens had found themselves a potential top 6 forward. The reasoning being, team don't simply give up on such talent so early on. 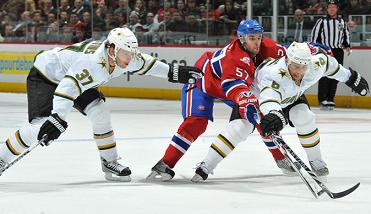 On the surface, it appeared that the two clubs had exchanged enigmas. Latendresse, who we have all seen alternately prosper and flounder, was the known quantity. Pouliot, on the other hand, was a wild card gamble few knew what to make of.

Often in trades, what is sought by fans is that a winner in a deal be declared, and the sooner the better. What sometimes gets lost, as it doesn't happen often enough, is that the players exchanged gain from the deal.

Thus far, such an ideal seems to be holding true, as both players prosper before our very eyes. Hence, for teams and fans, not to mention the parties involved, it represents the best scenario possible. 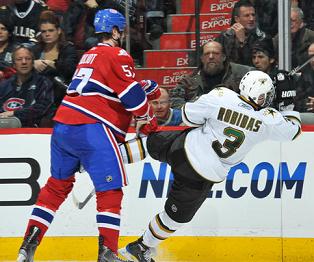 In 22 games with the Wild, Latendresse has notched 10 goals and 6 assists. His "coming out party", so to speak, came earlier this week against Pittsburgh, in which a four point game against the Stanley Cup holders had fans shaking their heads, backtracking in double talk.

If Latendresse were to maintain his Minnesota numbers over a season's course, an 82 game tally would read 37 goals and 22 assists.

Pouliot's impact on the Montreal scene was however, not as immediate. With a wrist injury at the time of the trade, he required a rehabiliation period before a short conditioning stint with the AHL Hamilton Bulldogs that saw the winger post 3 points in as many games.

He would go pointless in his first two games in his new uni, making a strong first impression alongside center Scott Gomez and a variety of wingers.

In 10 games since joining the lineup, Pouliot has now hit for five goals and an assist, which places him on a 41 goal pace over a season's worth of games. What has been most impressive though, is how well Pouliot has acclimated to the line since Brian Gionta's return from injury.

Having played eight games as a regular unit, the trio has accounted for 21 points. Prior to the return of Gionta, Gomez registered a 5 points night in his first two games with Pouliot on his flank. Since then, he has counted for 1 goal and 7 assists in the past eight games. In that span, Gionta has picked up where he left off prior to his injury, with 5 goals and 3 assists.

Below is chart showing what the Gomez, Gionta and Pouliot line have accomplished on a game basis since the December 23 date in Carolina. 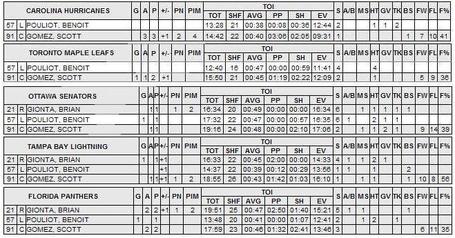 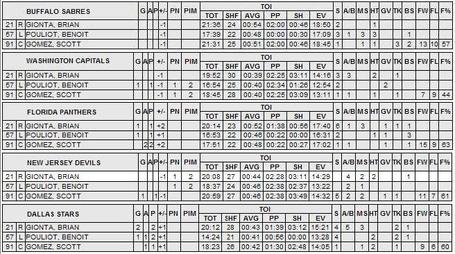 As for Pouliot, his ten game line is noteworthy. Here is a rundown of his stat total for that span:

It's safe to say from strictly as statistical point of view that Pouliot has been a comfortable fit in his first ten games as a Canadien. What the numbers fail to show, is that Pouliot is also is also playing some very sensible and dependble hockey away from the puck in both zones.

In the offensive zone, he can often be found clogging the crease area or cruising the slot for rebounds. He is also making himself known along the boards, using his size to fight and gain possession of the puck.

The interesting thing to consider in Pouliot's case, is that he still in his very first steps with his new teams. While he has fared extremely well in a short time, common sense tells that he can only get better with more games under his belt.

Pouliot, who was chosen one spot ahead of Carey Price in 2005, was scouted heavily by the Canadiens at that time. It seems now that they were well aware of his abilities and that knowlege has served them well. In essense, with Latendresse having been chosen 45th overall in the second round, Montreal moved up 41 positions in the draft by making the trade.

It takes time to analyze trades in today's game, especially when the values exchanged are young ones. In time, it could well be that the acquisition of Pouliot will rank as one of GM Bob Gainey's better deals.

Watching some games with a keen observer friend of mine, he noted several times how Pouliot assuredly displayed the talent of a first round pick.

Perhaps I'll throw a loonie into a jar every chance I hear or think the same. By season's end, just maybe that jar will contain enough coin for a Pouliot jersey for myself.