Jersey Loss A Moral Win To Build On For Habs

Share All sharing options for: Jersey Loss A Moral Win To Build On For Habs 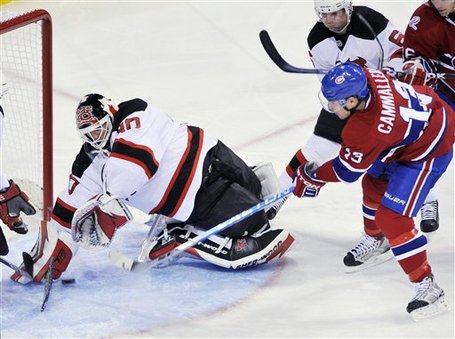 Ouch! What a stab, that Zack Parise goal was after a solid Canadiens effort produced a game in which they deserved a better outcome.

Is it just me or does Jersey seem to have inherited the old Forum ghosts and employ them in their favour whenever they play in Montreal?

I've had a silly theory that somehow Denis Brodeur, Martin's father and former Forum photographer, might have somehow siphoned the spirits of the Habs old haunts into his shutterbug lens at some point and transplanted good omens into his offspring to forever thwart the Canadiens when games get close.

How else could you explain the ridiculously lucky save Brodeur pulled off on Mike Cammalleri and that rabbit from a hat goal by Parise?

Like since when, in the name of intelligent hockey, does a smart player like Parise, upon losing his stick in a four on four situation, leave the zone to fetch a new stick when his team is outmanned in a next goal wins game?

The highly risky play of course left him alone at center ice, tapping his stick as soon as center Travis Zajac won his battle for the puck.

Seriously though, these things happen in the game of hockey (Hello, Rob Schremp) and their ain't a damn thing that can be done to prevent it. 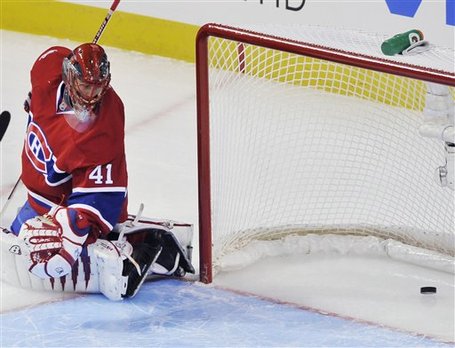 And so, the Habs are left with squeezing a positive spin out of another game in a one-too-many string of moral victories.

It's about all they can do - list the good things.

It all begins with serving up a solid effort against one of the league's elite teams. It continues with having ownership of the puck as much as their opponent did, through an edge in faceoffs, which hasn't been seen in a good while. It is all helped with a scoop of good scoring chances and backed a very commendable performance by Jaroslav Halak, who rebounded after allowing a suspect goal in the first.

It begs a question, like a four year-old tugging a millionaires sleeve asking for a quarter. If the Canadiens have the recipe for matching the Devils shift for shift throughout most of sixty minutes, why can't they pull this hot dish out of the oven on a consistent basis.

It's interesting to note that in this half season so far, they have put in solid showings (not all wins) against the Penguins, Capitals, Devils, Bruins, Flames, Sabres, Red Wings and Blackhawks.

Through 47 contests, the Canadiens have been involved in 26 one goal games, losing 14. In games decided by more than one goal, their record is 10-11. Clearly the Canadiens are in most games.

A positive sign should be that if they can duplicate the effort shown in the New Jersey game over a majority of the final 35 games of the schedule they should remain in the fight for one of the three final playoff spots.

With a short break upcoming (four days off) and the Olympic break ahead, Montreal has a favorable second half schedule.