Ten Habs Centennial Items You Might Never See ( But Wouldn't They Be Cool! )

Share All sharing options for: Ten Habs Centennial Items You Might Never See ( But Wouldn't They Be Cool! )

Yesterday, while perusing the comments at Habs Inside Out, one reader note lead me to drop some thoughts on Montreal Canadiens centennial memorabilia, and it received a fairly positive response. I was more than a little surprised, in fact. I thought it struck a chord.

In their 100th anniversary, the team has issued a variety of interesting items, from retro jerseys to Monopoly games to DVDs, and if I had the dough, I'd own them all by now.

While some folks would suggest the team possibly overmerchandished the team's illustrious history, my take is that is simply a reaction to a disappointing season. For myself, the memorabilia barely touched fans true Hab hearts.

Here are some items I would have loved to have the opportunity to cherish. It will never be too late to have these see the light of day. Maybe you will feel the same way!

Hey, I still call them sweaters!

It was perhaps the most logical centennial artifact to reproduce jerseys from the past, and with the Canadiens having donned pretty much the exact same colour scheme since the 1917 season, there were some very unique options from the club's formative seasons. While all but two have so far been unveiled and available to the public, the organization could have gone the extra step and personalized their offerings.

Wool sweaters, perhaps more detailed than those made available, from the 1930's to the 1970's personalized with Canadiens player names and numbers would have been much more alluring than the blank backs issued. Imagine owning a 1925 style Howie Morenz replica, with the CH on the arm and the world champion globe on the chest or the Irish stylized 1910-11 green leaf sweater with Georges Vezina, Newsy Lalonde or Didier Pitre on the back. Later years could have featured the 1945-46 white home jerseys with the blue center bar in the name of Rocket, Butch or Elmer Lach. The possibilities would quite frankly be endless, and I think that fans would have appreciated having them associated with Habs greats rather than being blank.

What is more celebrated than the Canadiens 24 Cup wins?

A great part of the mystique of the Forum were the banners that hung from it's rafters from two dozen Cup conquests. Consider how cool it would be to transfer some of that magnetism in to your living room. Had the Canadiens made replica Cup banner for all 24 years they would sold like wildfire. I can see them being about 30 inches high by 18 inches wide. People wanting replicas from years special to them, such as the first Cup championship witnessed would be allover this idea. I can also see true die hards snapping up all 24 and making their basements into shrines. They would hung from walls, ceilings, and windows in the homes of many Habs fans.

Goaltending legend Jacques Plante forever revolutionized the position on November 1, 1959, when he first donned a mask in a game against the Rangers after having been struck by a shot from New York's Andy Bathgate. Plante returned to the game to gasps from the crowd, and altered the look of hockey from then on. The moment is not only one of the most celebrated in Canadiens history, it is a part of hockey lore that is looked back upon by almost every goalie that has assumed the position since that fateful game. 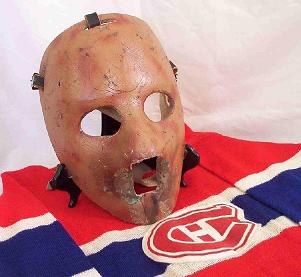 From this, I can envision an amazing product that would combine the recreation of Plante's original mask with two figurines on a base one foot square. On each front corner of the base, would be a Plante figuring, before and after the mask, pointing outward at an angle. The one on the left would be Plante maskless in the Canadiens red jersey, and the one on the right would be the masked Plante, wearing the bloodied white jersey of that legendary game. Both recreation would be backed by scale sized goal nets. Behind the figurines would be an actual scale replica of Plante's mask, complete with straps, that fans could remove from it's grooved place holder and wear at their wish. At the back of the base plate, twelve inches high, would be a photo of Plante being sown up in the dressing room.

Fans would treasure such a piece. It would be as though they had brought a momento home from a visit to the Hockey Hall of Fame.

Not all memorabilia has to have high end prices. Back in the 1930's and 40's, there were puzzles of team pictures and players such and Rocket Richard that fans were able to own. Why not reissue them? The photos they could add in could run from the 1993 Cup all the way back to Howie Morenz's steely pose. They could make a dozen different ones and retail them for about $9.99. 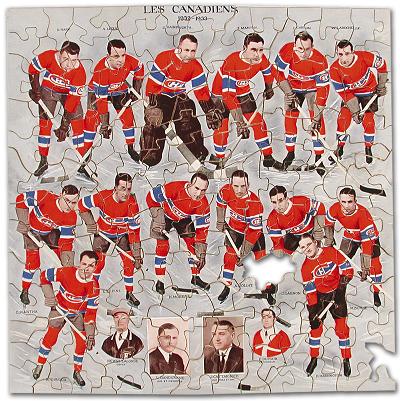 I can almost picture myself ready to build one. I reach into the box pf pieces, and the first one I pull from it has a piece of Guy Lafleur's flowing blond mane.

Before hockey video games, fans quenched their fantasies on table hockey. Remember flipping a coin to see whether you or your older brother got to be the sucky Leafs?

How about a table with two Habs teams from each of the 50's and 70's dynasties? You could play against your old man, and coin flip for the era.

The Canadiens could commision McFarlane toys to create figurines of Canadiens captains hoisting the Stanley Cup from legendary photos of the times. McFarlane already makes these, so how about a run on Toe Blake, Butch, the Rocket and the Pocket, Gros Bill, Cournoyer, Serge and Gainey? Imagine your rec room, with all these heroes spread across a display shelf. This one's a no brainer!

No hockey shrine will ever quite compare to the Montreal Forum. Wouldn't it unique to have one, about the size of a case of beer, that would unfold to reveal the inside bowl of the arena and its seats. It could be a cut away scale model of the rink, complete with 24 Cups that could be placed along side the far wall of the building. With a base that could allow it to be wall mounted, fans could purchase additional pieces such as banners, a clock and players replicas to place inside.

COMMEMORATIVE BOOK PRODUCED BY THE TEAM

Yes, there has been tons written about the Canadiens over a hundred seasons, but the club itself has never truly done one proper. The notion begs the question - why not?

If you have never heard of this product, it is likely because few hockey reproductions have been made available. What they essentially are, is huge mural portraits of athletes in action. Fatheads basically take up an entire wall, bringing a player to life, as it appear they are bursting into an office or living room. Most fatheads have no background image, and are simply shots of a particular player. With an added background they would almost serve as wall paper and one can only begin to imagine what types of iconic Habs images could be pasted onto a wall. The choices would be endless! 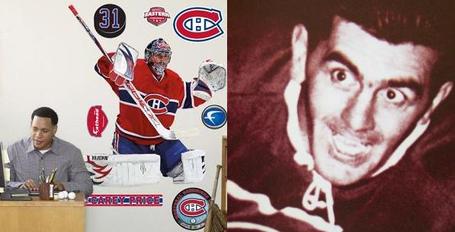 What goes together with cold beer better than hockey? Alright, but you can't put a babe inside a case of two-four!

Wouldn't it be neat if Molson Breweries made limited edition Stanley Cup shaped beer bottles? There could be one in every three cases or so, and each of the 24 Cups could be represented by a label in the form of a Cup winning banner. Random cases could have all 24! These Cup bottles would still be filled with beer of course, just so no one feels cheated, and could also have it's neck be sized slightly larger than regular bottles so that they could be refilled as mugs, which essentially they would be.

I can see a lineup forming at the Beer Store already! 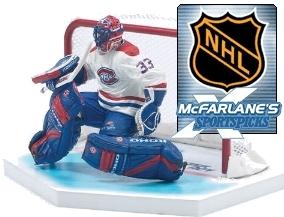