Share All sharing options for: Sergei K Misses Bus, Refuses To Go To 'Dogs, Demands Trade, Gets Fitted For Soother 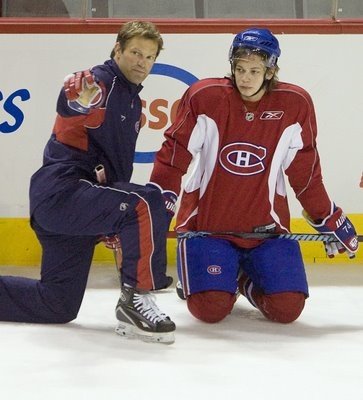 Sergei Kostitsyn has long been one of my favorite up and coming Habs prospects. Barely into his third pro season, his young career has already reached a crossroads. After a series of unfortunate events, he has now asked Canadiens GM Bob Gainey to trade him.

Call this a saga.

The sad turn of events began last season, with the alleged involvement with criminals elements of which he was eventually cleared, and continued of late with reaming from new coach Martin.

Fans are singing two wholly different tunes about this latest development, and both are poignant points of view.

The louder crew are a fed up bunch, and they're telling Sergei "Don't let the door hit you where the good Lord split you!" Adios, whinner!

The other tune, and it begs the question, is where are the kid gloves for the kid?

The younger Kostitsyn's play took a measured dip last season, after things failed to come to him as easily as they had in his first callup. As the learning curve became steep, indiscipline creeped into his game on a nightly basis, and seemed to be tolerated a triffle too long by then coach Carbonneau. Then there was that mid season wet petard of a non scoop that for all intents waylayed the young man like he didn't know what hit him. The Habs then sent him to Hamilton where it took him a good couple of weeks to shape up and play like he was capable. He finally turned things around and was called back up in time for the playoffs.

This summer, an attitude problem seemed to accompany him to camp. Rumours that he missed the team bus tagged along just as coach Martin gave him a proper grilling during a scrimmage. Kostitsyn seemed to rebound a bit, and put in a solid effort in a game against the Bruins. Earlier, he had missed some exhibitions due to the final days of rehab on an injured shoulder.

Two days back, the Canadiens cut him from camp and were waiting for him to report to Hamilton. Today, it was revealed that he has asked the team for a trade. GM Gainey has said that it will be looked into, but that the player must first report.

Now, I'd be treading a fine line in suggesting the kid is undeserving, but something has gone seriously wrong in all this. It is quite clear that Sergei is in need of some guidance or assistance. It's easy to dump on him because of a flagrant lack of maturity here and by all appearances the Habs are literally tossing him to the dogs.

What I don't see is the support for him from the club.

Like Gainey did when Brisebois was hounded by fans. Like when Kovalev found himself lost on an occasion or two.

That's not say Habs brass hasn't done so privately, but if they were to do so publicly it might give the kid a lift when he most needs it.

Sergei is a good player, with an edge element in his game. Of course he needs to grow up and mature. He's stepped off course and it is the Canadiens concern to set him straight. Perhaps it is what they are attempting to do with him by playing hardball. It's a tactic that works for some, and works against others.

Hopefully his agent will tell him to lose the pout, report to Hamilton, and tear it up. Use the demotion as motivation and show everyone what he's made of. Should he do so, he will earn his return to the big club, put all this behind him and get on with his once promising career.

The stand he is taking only serves to hurt himself in the long haul.