Share All sharing options for: Habs Go The Alternate Route 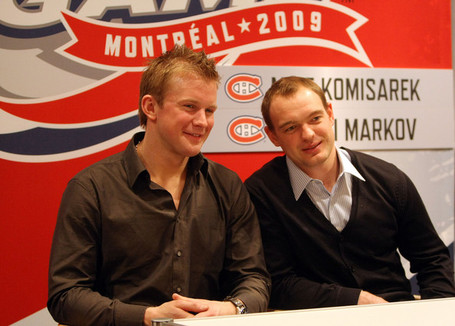 Canadiens coach Jacques Martin, who previously mentioned that a captain would be named by the season's launch has let it be known that the club will for now be going forth with three alternates to start the season.

The chosen trio are Andrei Markov, the nine year vet who had worn the "A" this past season, Brian Gionta, who several see as the next captain, and Hal Gill, for reasons that I fail to see at present. No knock on Gill. I'm just caught a little of guard with his nomination. I was expecting maybe Scott Gomez or Josh Gorges.

Whether the Canadiens' next captain emerges from this group waits to be seen. For now, Martin has not set a concrete timetable for the naming of a captain, but has said the team will not play out the entire season without a captain.

A few weeks back, a poll at this site asked what readers thought about the captain question. Several players were named and options given. The final count read that 121 of 399, or 30% of readers opted for waiting rather than rotating.

It still seems odd that the team is starting a season without a captain.

Wonder which team, the Maple Leafs or Habs will name one first?

Wouldn't it be a bit agonizing if Toronto names Komisarek to the role before the Habs solve the mystery?