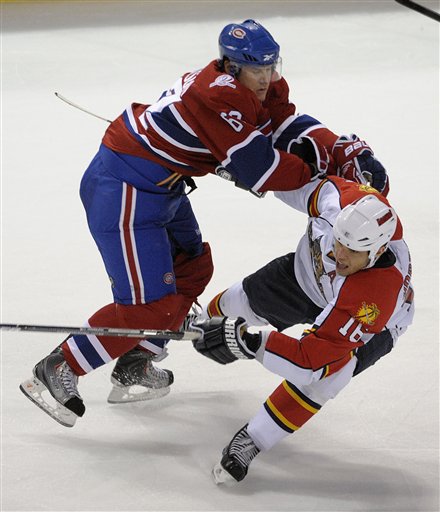 Update, Sept. 27, 8:00 p.m.: The Canadiens have announced that Sergei Kostitsyn has been sent to the Hamilton Bulldogs.

In the coming days, the Canadiens roster will be pared down to a maximum 23 player limit. There are currently 31 players on the Habs preseason roster, including regulars, prospects, and injured players, meaning a minimum eight players will be assigned to the Hamilton Bulldogs by Wednesday.

Of this dozen, Chipchura, Fortier, Pyatt and Henry are currently injured with Henry actually with the Bulldogs oranization in Scotland.

Of the eight left, it is assumed that Sanford, Weber, Carle and Maxwell will be returned to Hamilton with D' Agostini, Pacioretty, Stewart and Kostitsyn likely sticking with the team. If that is the case, the team would be opting to carry 3 additional forwards rather than eight defensemen, a luxury it might not afford itself, seeing as rearguards Paul Mara and Roman Hamrlik have been injured during camp and are yet to be declared 100% healthy.

Should the team opt to keep Weber on the roster come Thursday, one of the four forwards would be sent to Hamilton unless a player is placed on the injured list. The sticking point could be forward Georges Laraque, who, despite not appearing in preseason games is said to be ready to go on October 1. If Laraque is deemed unfit by then, all four remaining forwards are safe. If he is set to dress, one of Pacioretty or Kostitsyn would be demoted, as both Stewart and D' Agostini would have to clear waivers in the event they are sent down.

By all appearances, Pacioretty will stick with the big club, as he has seemed to have earned his spot. Kostitsyn's performances have been less convincing, and he has (according to Habs World) 39 NHL games left before his status become exempt. Unfortunately for the younger sibling, that fact does not work in his favor at this point, and unless a transaction to clear the logjam at forward is envisioned, he may be Hamilton bound to start the season. 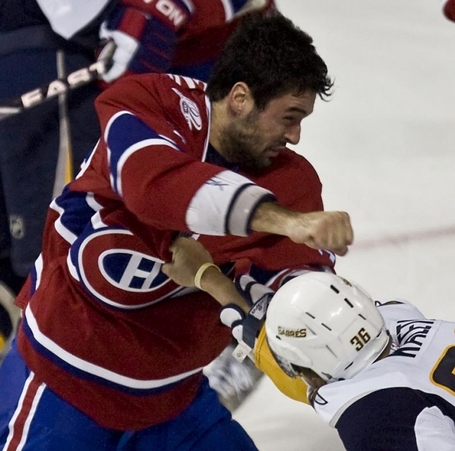 Further complicating issues regarding defensemen has been the play of rearguard Ryan O'Byrne, initially seen as the club's seventh D-man. O' Byrne has been surprisingly solid this camp, and has outperformed both Gill and Mara. As the only right handed shot among the seven, O'Byrne chances of becoming a regular a very good. Weber and Carle are also right handed shots.

Chipchura's scenario also represents a hurdle for the club. No longer on an entry level contract, he would have to clear waivers to pass to Hamilton. He is safe should his return from injury coincide with another injury on the club, but if all players are heathy decisions will have to be made. He can be assigned to Hamilton on injury rehab for up to two weeks if such a scenario arises.