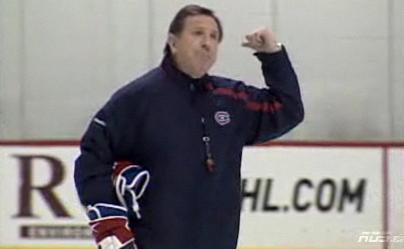 Do you like Jacques Martin as Canadiens' coach yet?

In practice on Wednesday, as recounted on Habs Inside Out the new bench boss called Sergei Kostitsyn out, brought him aside and gave him a rather brash talking to for being in positional wilderness during a practice.

No word if Sergei went all Allen Iverson on his admonisher....

While the junior Kostitsyn was the intended target, you can wager a player's per diem that every skater took note of the coach's knuckle tapping.

No, Martin apparently, as his reputation makes clear, does not mess around.

What is most curious about this whole story, is that it is a story in the first place. It just goes to show the difference between Martin and his predecessor. While Carbonneau was a former player who could often sympatize with a player's point of view, Martin is a career coach who has been around long enough to understand that his longevity depends on team success, and not on the perks that come with playing for him.

The Kostitsyn incident, if it can even be called that, should not be blown out of proportion, but it does spell out another major difference between Martin and Carbonneau. 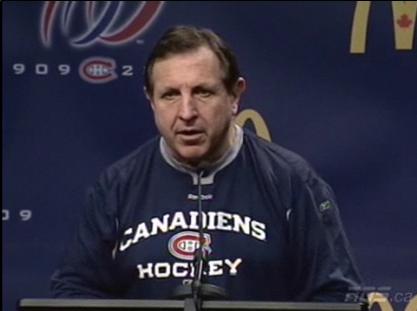 Under the former coach, Kostitsyn was brought into the team, made an immediate difference, but then slid in terms of contribution and concentration over a season's course. Wharever Kostitsyn's issues, Carbonneau caught up with them when they became obvious. His demotion coincided with the frivolous story that broke concerning alleged mafia ties.

One full team practice into the season, and Martin sees Kostitsyn straying and nips it in the bud. The experienced coach did not let the situation fester, and brought correction to it immediately, not even waiting for the privacy of the dressing room.

If that seems like a fresh approach, it might only seem so because it has been a 14 years since the Canadiens hired an experienced NHL coach.

What those on the scene in Montreal witnessed yesterday was the beginning of Martin making players accountable. It's a process that will cover in game actions, practice habits, and extend to off ice behavior.

The experienced coach in Martin will also have dealt with Kostitsyn's errs another way. After practice, he would pull Sergei asisde, letting him know it wasn't anything personal, explain in detail what he is looking for and show the player how this breakdown affects teammates on the ice.

Martin, a good teacher who is structured and stern, will make two or three adjustments to every player in the course of a season. They will lead to improvements in the player's performance, and hence lead to more attentiveness on the part of players.

Last season's Canadiens were a talented enough crew that they would win games they deserved to lose. As time passed that reality changed. Many things conspired to rot the Canadiens season, but it cannot be denied that the club's bad habits were gaining ground because they were allowed to gain ground.

We've all heard post game press conferences in which the coach, faced with questions in light of a dismal effort, will say: "The important thing is that we got the two points!"

This far into the camp, there is the impression that Jacques Martin won't be so easily satisfied with winning.

Check RDS for a pair of reports and video.