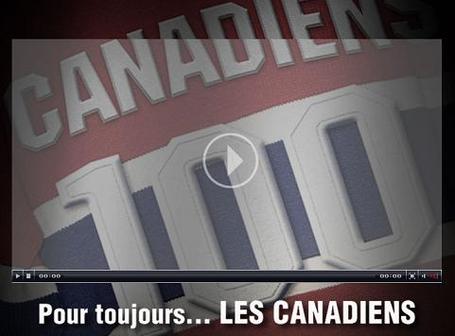 "Pour toujours...Les Canadiens", a film by Sylvain Archambault will be released to audiences on December 4, 2009, the date of the Habs 100th anniversary. There have been previous trailers posted at the Canadiens official site and on You Tube, but an updated an elongated version is now up at the movie's official website.

The storyline described at the Canadiens official site invloves a 17 year old hockey player William Lanctot-Couture, who stars for the College Francais hockey club. William's games slumps, while his father is obsessively involved with making a documentary on the Canadiens Centennial. While William’s father is distracted by his work obligations, and his mother, a nurse, becomes concerned with a 10-year-old kidney transplant patient. The young boy's love of hockey represents his will to live, and he deeply affects staff at the hospital.

All three tales intersect, with everyone affected by the twists of fate involving the two inspiring youngsters, each fueled by their passion for the game. The Montreal Canadiens, 2008-09 edition, appear as themselves in hospital scenes. While the action takes place in 2008-09, the team’s rich history will be celebrated through rare footage of Canadiens game action from throughout the years.