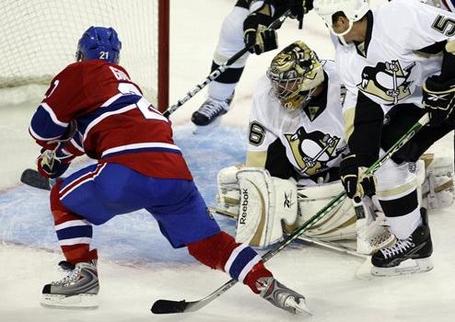 After five exhibition games, Brian Gionta has not only been the best of the newcomers to the team, he has often been the best and most exciting player on the ice. His performances have displayed a gutsy perseverence that has so far endeared him to fans and teammates alike.

Prior to the start of the five game exhibition run, coach Jacques Martin spoke of Gionta's leadership traits, as many off ice as on. With a void in the Canadiens captaincy, many onlookers took note.

Could Gionta be on Martin's radar for the "C"?

Previously, the notion of having a newcomer be designated captain Montreal was a farfetched proposition. Such things just do not happen in Hab land. The perceived front runner was seen to be veteran defenseman Andrei Markov, who by all accounts, seems to have passed on the honour.

Gionta is one of several players donning the assistant captain's "A" in camp, which spells out that Martin surely has him in mind. Last night's 2 goals and 1 assist performance against the Penguins by Gionta represented the best showing of any individual on the club so far this camp.

After the game, Jacques Demers, who loves to scoop the Montreal hockey scene right or wrong, said Gionta will be the name. Today, an article by Scott Gordon of the Globe and Mail had this to say on Gionta.

Jacques Martin has consistently praised Gionta's attitude and work ethic, he's combative (last night he got up in Geno Malkin's grille after a bit of a sneaky elbow behind the net) and he can obviously still put the puck in the net. Gionta has a telepathic understanding with Scott Gomez, which effectively removes any excuses for the formerly underachieving Ranger centre. He also makes Plekanec instantly better by showing him that small men can drive to the net. He demonstrates to the Matt D'Agostinis and Guillaume Latendresses that while they may not have thought they were mailing it in, they were.

There is one week left prior to the season's opening, and my guess is that a captain will be named by September 28, next Monday, with three days left for the media to get all over this before the drop of the puck in Toronto October 1.

Below is a choice between four players, some that have been discussed here in recent weeks. What your thoughts?