Share All sharing options for: 5 Games In 5 Nights: The Good, Bad and Ugly 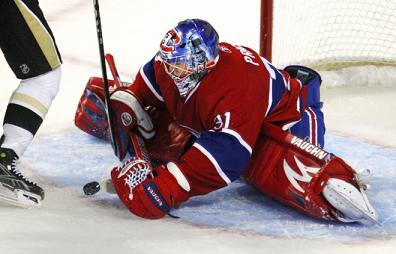 After five exhibition games, four of which were televised, the Canadiens pre-season record now stands at 3-2. Thus far, it can be stated that Bob Gainey's summertime shopping was a success, but because of the nature of what training camp is all about, much of what we are seeing is inconclusive in terms of other players in the organization and how everything fits together.

There are few surprises in the group, with some people suggesting that perhaps Subban would have gotten a longer look.

Desharnais is one player who turned some heads. The shifty but diminitive center is a jitterbug of energy, and is one player coming from far who just might carve himself an NHL career one day soon.

Neilson earned himself a third game with his pugnacity in the games against Ottawa, but was returned immediately following the Penguins game.

It will be very interesting to see if further cuts are made on Tuesday and the group is pared down some more for the final stretch of camp.

For now, it just seems that there are way too many players in camp for starters. For myself, there were just too many kids in town without a chance at making the team. Sorting the contenders from the pretenders after watching three or four games games gets a little nauseating. What it amounts to is having the Hamilton camp in Montreal for those concerned, which is even more odd considering that Bulldogs jet off to Scotland to begin camp on Wednesday.

The trouble is, the five game in five nights neccessitates having two squads worth of bodies around.

Here are some random thoughts from games played over the last five nights.

The Panthers game showed some promise, especially in terms of the known quantities. The two Ottawa games were a mess at times, and the third period against the Bruins in Quebec on Sunday restored some hope regarding some players having slow starts. The Penguins game, despite the heady opposition of Sidney Crosby and company, should have been, and was, the Canadiens most consistent effort so far.

It appears that Scott Gomez is up to the challenge of conquering the Hab faithful. Ditto Mike Cammalleri. The pair, along with Pacioretty (he'll make the cut!) or Andrei Kostitsyn will form a killer top line many nights. The newcomers looked primed and anxious to please in all their appearances. 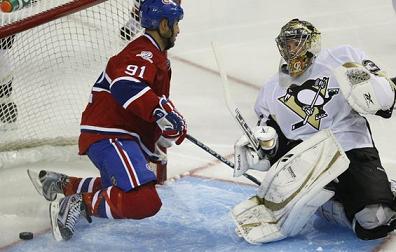 Kostitsyn looks like he hasn't had hockey on the brain in almost six months. The synchro is slow, but the shot's still there. When this trio works out the kinks, it'll be a thing of beauty.

There's definitely something good happening between Tomas Plekanec and Brian Gionta. Pleks looks rekindled at times, and Gionta's speed creates option he did not have before.

Former Habs coach turned media mouthpiece, Jacques Demers, is calling for Gionta as captain. I can't come up with an argument against that notion. He's been far and away the most electrifying player in camp. That alone, isn't enough, but Jacques Martin, who will make the choice, was launding Gionta's leadership merits before the ex games began.

The jury will be out on Guillaume Latendresse for awhile more, as unfairly as it has ever been. His skating is no longer the main concern in my eyes. Playing as a possible top six forward, his timing is now under scrutiny. His speed is sufficient to allow his physical game to become dominant, but his reaction time in joining the scoring opportunities his hits help create still needs improvement. He's coming along though, and there has been obvious improvement in the three games he's played. Scoring against Pittsburgh will take some heat off, at least until the next game.

Some other vets have been, shall we say, invisible?

Maybe I'm overreacting some here. Like, it has been all of what, 10 days into camp?

Max Lapierre, wheverer you are, bring back Gregory Stewart and Matt D' Agostini, and send a search party out the chilled water bucket Andrei dips his head in between shifts. While it is only pre-season, my gut tells me one of Stewart, Dags or Sergei don't finish the season in Montreal.

You gotta like the reach on Hal Gill, but he's soft when he should be rough. His nickname might just become the "Gentle Giant." So far, Ryan O' Byrne is stealing his job.

O' Byrne hardly looks like last season's occasional basket case. He's been sturdy and dependable in games, and nasty when he's needed to be.

Nice to see Sergei Kostitsyn back playing. Nice to see the edge is there too, although bowling over that Bruins player the other night just looked outright dumb.

In a team scheme, I don't yet see alot of playing of Martin's system just yet. I see a whole lot of hesitation and trepidation from usure roles. One thing that is evident though, is that the new look Habs break out at blazing speed. The trio of Gomez, Gionta and Cammalleri especially, come back into their zone with the same thrust they leave with.

Carey Price, finally, resembled a goalie we can all have faith in against Pittsburgh. He would have been my third star last night, after Gionta and Markov.

A final thought on some of the kids. In a roundup of the whole Bulldogs bound crew, there's almost a half dozen players that could be stamped without doubt as future NHLers. Not counting Max Pac, Weber, Sergei and others already considered to have made the jump, there are P.K., Ben Maxwell, Ryan White, Desharnais and Trotter. A pretty good crop, considering the most talented prospects might just be the junior aged kids not attending camp.

Photos and live game blog at Habs Inside Out