Share All sharing options for: New Look Habs Off To Winning Start 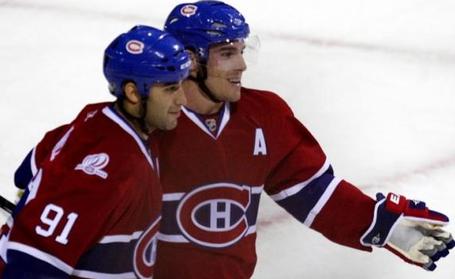 Exhibition games being what they are, rarely does the first pre-season contest matter much.

Tell that to the 21, 273 pairs of eyes gathered at the Bell Centre to catch a first hand look at the new look Canadiens!

The Habs, with a late dip in tempo, hung on to deafeat the Florida Panthers 3-2, and this one mattered in every way and form other than the usual two points in the standings. For Montreal fans, it was their first glimpse at what Bob Gainey bought and brought home this summer. For that reason alone, this first game was worthy of a microscopic look.

For players new and older alike, the first chance to acquaint themselves with each other against NHL competition was also of prime importance. As newly minted Habs, Scott Gomez, Mike Cammalleri, Jaroslav Spacek and Curtis Sanford needed no reminding of the significance of making a strong first impression in front of the locals.

All four passed the test. 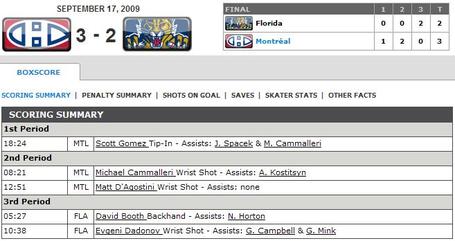 Cammalleri with a goal and a helper, Gomez with the pre-season's first score, Spacek looking at home on the Habs PP, and Sanford, holding the score close while facing lots of rubber in the third, all put in efforts to endear themselves to the faithful.

Cammalleri just might make Habs' fans forget Alex Kovalev some if he can deliver what he brought in this game on a regular basis. His goal, the second of the game, came off a trademark move. Accepting a slip pass from linemate Andrei Kostitsyn, Cammalleri was cocked and ready to fire, left knee low to the ice, stick raised high. With no rust showing, and not a trace of hesitation, Cammalleri let a blistering shot howl past Panthers goalie Scott Clemmenson. A thing of beauty it was!

Gomez opened the scoring on an alert play. Heading towards Clemmenson's crease, the nifty center redirected a feed from Spacek at the point, and angled the puck between the goalie's legs.

The Canadiens third tally came from the stick of sophomore Matt D' Agostini, who intercepted a clearing pass in the high slot, took one step, and fired top shelf.

Other highlights of the game included a thundering hit from Guillaume Latendresse on Ville Koitinen, a golden chance by hopeful David Desharnais, and a rock 'em, sock 'em tilt between Ryan O'Byrne and Florida's Gregory Campbell.

Carey Price allowed no goals on nine shots, in what was a fairly tame first 30 minutes.

Now as much as I enjoy listening to games on radio, it will be nice to catch the boys on the tube after an overly long summer of anticipation. Tomorrow's contest against the Senators will be on RDS starting at 7:30, and unfortunately Kovalev will not be in the lineup. 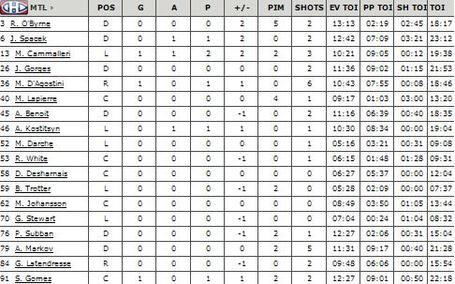 For more on last night's game, check the recap and boxscore from NHL.com, and the Numbers Game and "Hi, I'm Mike" from the Canadiens official site.

Habs Inside Out photos