40 Quotes From The Habs Camp

Share All sharing options for: 40 Quotes From The Habs Camp 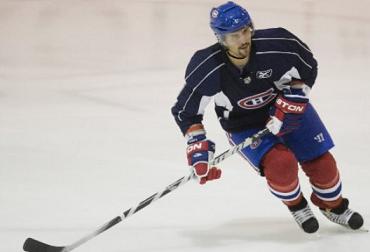 Translated from La Presse, RDS, CKAC, Rue Frontenac and Le Journal, here's a large sized scoop of what the coach and players have said over the past few days.

"Gionta leads by example more than by words. Others speak to make their presence felt. There needs to be balance between the two sometimes for players to find their comfort zone. For quiet leadership, there was no better example than Bob Gainey." - Jacques Martin

"The Canadiens are nothing less than the NHL's elite organization. That is why so many free agents chose to come here this summer." - Brian Gionta

"It's pretty much what I expected. We're trying to integrate ourselves by learning enough french words so that we can get by . It's surely harder to learn a new language as one gets older, but everyone's helping and up till now it's been great." - Gionta

"I like what I see so far. We wanted to improve upon our work habits and the guys are applying themselves to develop a good work ethic on and off the ice." - Martin

"I have to play a rugged game. I have to be meaner and have an impact during games. I dished out a couple of good hits Monday, especially to my good friend Gregory Stewart. There's no friends on the ice." - Ryan O' Byrne

"O' Byrne has an advantage in that there aren't many right handed defenseman. We want him to perform within his element by being physical and imposing his presence on the ice like he did today." - Martin

"He had a right to voice his opinion. It's only the first day and it took some time to get going. I hope I answered him later." - Scott Gomez, in response to a heckler's shouts to "Wake up!"

"To have success, the forwards must be well positioned and mobile. In a team game we have to place an emphasis on this aspect." - Martin

"We want to encourage defensemen to join the rush. During breakouts, we want him implicated offensively. We have an experienced group of defensemen and the talent to play this way." - Martin on Subban

"They're asking us to pinch offensively, and that's what I tried to do. We have to pick our spots. I'm trying to do the best I can while remaining responsible in my end." - Subban

"Marc-Andre had a lot of pressure placed on himself at the beginning and it was a pleasure to see him defeat those obstacles. I see similar things with Carey, who is constantly in the media spotlight. This season he is focused on turning the page. He's got a good head on his shoulders and he's loaded with talent. He'll continue to progress as he has solid foundations." - Hal Gill, comparing Price to Marc-Andre Fleury

"My role will consist of taking up space in front of the net and assuring that Carey can see the puck. If he can see, then I have to block those shots. To have success, we must be stong defensively." - Gill

"Our job will be to clean the front of the net." - Paul Mara

"We hear all kinds of talk, but it doesn't compare to experiencing it. Montreal is incredible. A real dream for any hockey player." - Mara

"Playing with Gomez was never a factor in my decision to come here. I came to Montreal to play for a winning team, one with a longstanding history. The way things were unfolding (on July 1) excited me. They spared no effort to put a winning team together and I wanted to be part of that. We seem to have all the elements of a good team." - Gionta

"Anytime you are playing with someone, even if it just for a short period, you have to adapt to him and find a groove. In my case, all the players are new to me, so I have to work on understanding all their tendencies. Lines change from one day to the next, and it's no big drama." - Gionta

"I drove in New York City, so the traffic here isn't much different. It's pretty well how I expected it. We are trying to integrate ourselves as much as we can, learning abit of french, enough to get by. We cannot be as discreet here as in New York, but it's a nice change." - Gionta

"I have to have an impact over the course of a game. I watched films from last season...and I wasn't playing badly. I moved the puck well, but I don't think I left opposing players leaving the arena with the impression that I was hard to play against." - O' Byrne

"A player must leave his imprint on a game, whether it involves scoring or in other manners. My thing is to be physical, and I have to get back to that. I've got to be meaner out there." - O' Byrne

"The only time I play the right side is on the power play." - Jaroslav Spacek

"I haven't brought it up with Spacek. We'll see. There is going to be many changes made in regards to defensive pairings." - Martin

"During the past few seasons, Markov has always lined up against top lines. It's early in camp, but I believe we can put together three solid pairings that can match against any line. Our group of defensemen are experienced and dependable, and they reming me alot of the Carolina Hurricanes when they won the Cup in 2006. Depth wise, there was not a large gap between the first and sixth defenseman. It's early, but I think that we have a similar group." - Martin

"It's my fourth season alraedy and I know all about what it is to play in Montreal. It's not everyone that has that experience, not even older players coming from other clubs. I can surely help the new teammates, supporting them in some way." - Guillaume Latendresse

"I'm ready to be more of a leader this season, preaching by example on the ice and speaking up in the room." - Maxim Lapierre

"It's my year. I have to take my place as an offensive player. In my first three seasons, I had opportunities to show what I could do. Often, thosen chances didn't last long enough for me. This season, I have to seize the opportunities given. Everyone starts from the same place and I have to make a good first impression." - Latendresse

"We have to completely put the past behind us. Teams that don't mak changes after a bad season have to ask themselves questions. In our case, this is a fresh start. There's nothing more to say other than we don't yet know how things will be. On paper, we have excellent players, and we are getting along great at the moment. We're all anxious to get going." - Lapierre

"We put the line (Russel-Trotter-Johanson) together against the best line (Plekanec-Gionta-Moen) and they found a way to keep them pinned in their own end. Such a performance will be rewarded with exhibition games." - Martin

"We're trying our best right now because we undertsand that there isn't much time to make our mark." - Brock Trotter

"Whether Plekanec and I spend much time on the same line or not, it's important to develop a certain chemistry." - Gionta

"Moen comes from a great hockey program, having won the Cup in Anaheim. The more players you have with that winning pedigree, the better it is." - Martin

"What I noticed about Gionta and Moen is that they apply themselves. They are intent to practice and determined to improve themselves. That attitude should be contagious with this group." - Martin

"I remember in Salt Lake City (Olympics 2002) that our three best players were Lemieux, Sakic and Yzerman; three guys that didn't say much. They did their talking on the ice. That is how Gionta can excercise his leadership. In Montreal, Bob Gainey was the same, and when he spoke, people listened." - Martin

"People say Gionta is small, but he is one of the five players I hated playing against most. He's quick, tenacious, and always in your face. Just because he's small doesn't mean he's easily handled." - Josh Gorges

"Johansson bring depth at center. He has professional experience. The Swedish Elite league is a very good hockey league and I'm sure that he can help our organization." - Martin

"I'm not sure of earning a spot with the team. I will try to show what I am capable of. If I don't make it, I'll go to Hamilton and hope to make it back. I'll be spending the year in North America. If it takes one game, ten games, or ten years, I'll be patient." - Mikael Johansson

"I played on the same line as him (Fabian Brunnstrom) during a whole season, and if he can play in the NHL then so can I." - Johansson.

"There will be some good battles. There's lots of options on left wing, with the Kostitsyns, Travis Moen, Guillaume Latendresse and Max Pacioretty. There could be some rotation." - Martin

"We have to make good decisions with the puck. Forget the fancy stuff and fire at the net. We have to become a team that is hard to play against." - Martin

"We have 20 days to forge an identity with this team and develop a chemistry among the players. I want a team that works hard and plays a puck possesion game. There will be much emphasis on that aspects." - Martin