Who Will Be The Surprise Of This Canadiens Camp?

Share All sharing options for: Who Will Be The Surprise Of This Canadiens Camp? 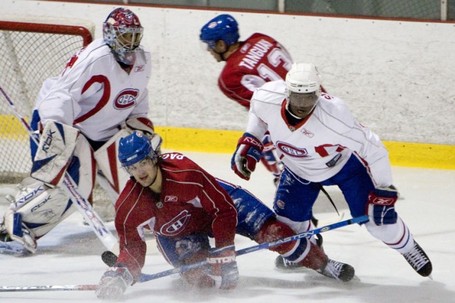 Every once in a while, a training camp produces a surprise performance or two, that scuttles an organization's plans and forces the team to consider alterations to it's pencilled in 23 man roster

The Canadiens current NHL roster consists of 22 one-way contracts that include two goaltenders, seven defenseman and 13 forwards. The list does not include forwards Max Pacioretty and defenseman Yannick Weber, both of whom played games with the Canadiens last season, but are on two-way deals that allow them to be shuttled to Hamilton without needing to clear waivers.

Several seasons ago it was Mike Ribeiro who played his way onto the club after a surpring camp, Guillaume Latendresse made a strong impression at age 18, cracking the lineup one camp later after another solid showing. Two seasons ago, Sergei Kostitsyn turned heads, and was quickly recalled from Hamilton two months into the season.

Consensus this season, is that the final available spot is Pacioretty's to lose, but it would be unlikely that the Canadiens keep the big winger in Montreal if he is not be a regular member of the starting 12 forwards. As the club would prefer to give the youngster as much grooming time as needed, Pacioretty's fate may well depend on whether he gels with linemates in camp and can become regularly productive. Projected as a top - 6 forward, it will do Pacioretty little good to toil alongside fourth liners in Montreal. One full season removed from the University ranks, the kid simply has to play to develop.

Where available forward spots could open up invlove the projected use of tough guys on the team. While it is doubtful that the Canadiens will dress all of Travis Moen, Georges Laraque and Gregory Stewart in a particular game, two of the three will more than likely be in the lineup on a platoon basis, seeing action alongside fourth line pivot Glen Metropolit.

Latendresse, as well as Pacioretty, could be an eventual second line fit, with camp helping determine where the cards fall. Pre-season injuries could also be a factor in determining the opening night lineup October 1.

As it stands, other than Pacioretty, there are six candidates that could cause a surprise at this point and they include Weber, defenseman P.K. Subban, centers Kyle Chipchura and Ben Maxwell, forward Mikael Johansson, and depth goaltender Curtis Sanford. 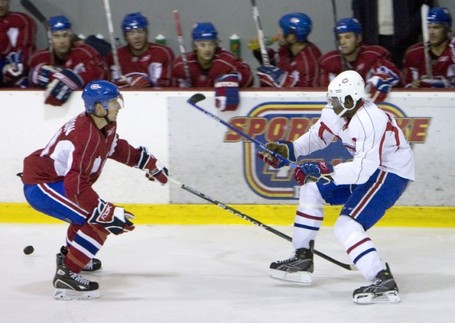 Sanford would be deemed a long shot to making the club, as it is assumed that goaltender Jaroslav Halak's job is not in play. That Halak would not clear waivers makes the scenario practically moot, outside of an injury situation.

Weber is seen as the team's eighth blueliner, presently ranked behind Ryan O' Byrne and earmarked for Hamilton for another season of professional grooming. His offensive upside will make him an alluring option as a callup in light of injuries, but his game shares similarities with prospect Subban. While Weber is one year Subban's senior, his physical game may not be as mature. Where these two fit in the organizational scheme could play out at this camp, with the one gaining the edge becoming one step closer to the big club. 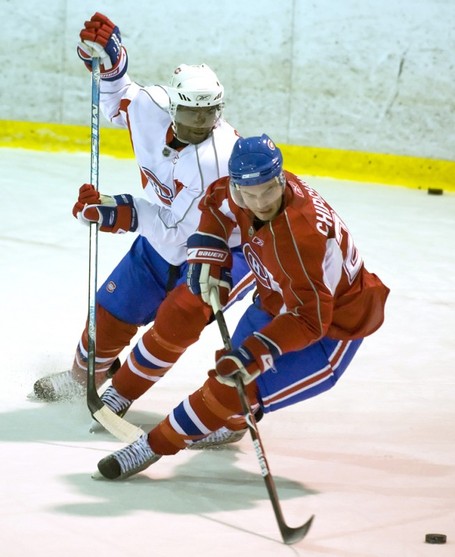 A similar scenario will play out between centers Chipchura and Maxwell, if not at this camp, then very soon into the season. Chipchura has an NHL contract, but is far from a sure bet for the big club. The Canadiens were very pleased with Maxwell's first professional season, and it is he who is expected to lead the Bulldogs offensively this season. Should he excel and a top line center go down to injury, Maxwell could get the call ahead of Chipchura. This was the case last season, when Maxwell was called up and used primarily in a defensive mode. Several opinions suggest that the likable Chipchura is playing his future with the Canadiens at this camp, and his performances will be closely scrutinized. 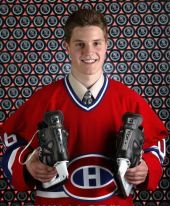 Lastly, and perhaps under the radar some, is Johansson, a solid two way player with Farjestatads BK Karlstad the past four seasons. A former Red Wings draft choice in 2003 and signed by Montreal as a free agent this off-season, Johansson was promised a shot at the big club by the Canadiens. While players from European leagues are perhaps the hardest to gauge in regards to being NHL calibre, it has been said that Johansson fits the prototype Jacques Martin responsible forward model, much in the manner of Andreas Dackell. He may not look out of place with Sergei Kostitsyn on a Metropolit centered defensive trio.

While it appears unlikely that major surprises are in the works at this Canadiens camp, several players are jostling for position on the bubble. How they play against other pros in exhibition games could go a long way towards determining how soon we them in Montreal.

Photos of Habs at camp courtsey of HIO.

An explanation of waivers qualifications from NHL'scap.com.