Lang Could Offer Possibilities And Solutions For Habs

Share All sharing options for: Lang Could Offer Possibilities And Solutions For Habs 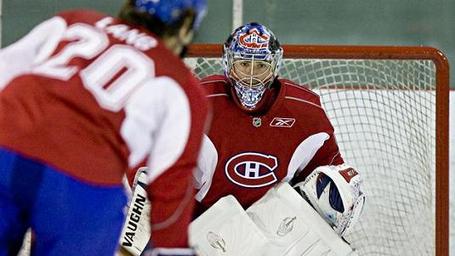 It was but an unconfirmed foot note in the slow season of summer hockey news, but a few eyebrows were raised last week when the idea was floated that center Robert Lang may be offered a tryout come training camp.

For the moment, such a notion remains uncomfirmed.

Lang was something to remember in a forgettable 2008-09 Canadiens season, racking up 39 points in 50 games when his season was cut short with an achilles tendon slash in a nightmare game against the Bruins on February 1.

At the time, Lang was the club's leading goal and point getter, a surprising thought when one remembers he was brought on board as the team's Plan B to a dithering Mats Sundin.

Lang was thrilled to be a Montreal Canadien and it showed. A few games before his season was terminated, he had registered a unique hat trick of sorts, scoring his three goals four different ways - even strength, PP, and into an empty net on a 6 on 4 PK.

With Lang in the lineup, the Canadiens were 28-16-6. Without, they were a worse than dismal 13-14-5. Reasonable voices were suggesting that Lang and not Alex Kovalev should have represented the Canadiens at the All Star Game.

Yup, he had been that good!

While GM Bob Gainey was busy blowing up the blueprint this summer, Lang became pretty much an afterthought in the Habs scheme of things. Fans and curious onlookers of the team have been left with nothing but unanswered questions in regards to the Canadiens lineup, seeing as there is an unprecedented number of new faces on board.

The most positive impressions on this new group of could-be Habs imposters suggests that the club has gotten both faster and younger. It is also highly likely that it will be better coached. 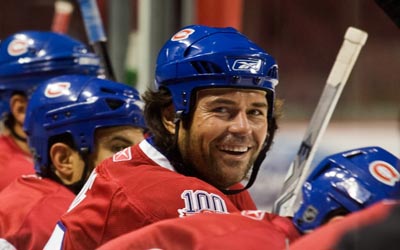 Where Lang could fit in if he makes the club, is in addressing the need for size down the middle and leadership on the club. Of the question marks and voids on the team, Lang's addition would cover both needs if he is fit to make the team.

It's worth a shot, and no one can state he has not earned it. In a turbulant sea of indiscipline last season, Lang's was a steadying influence. It may or may not be coincidental that the wheels left the wagon after he'd left the scene.

If Lang is healthy enough to make a contribution, several factors would benefit.

At center, the one sure thing will be that newcomer Scott Gomez will be front and center, and handed every opportunity to succeed. In the past two seasons, Gomez's numbers have been on a slow decline, so one is tempted to wonder how much of a sure thing he can be.

Tomas Plekanec, whose play can range from crafty to absent minded, is coming off a miserable season he must surely rebound from. There is no doubt that Plekanec is capable of much better than he offered last season. Plekanec is being paid a hefty $2.75M an is facing down unrestricted free agency at season's end. He's most likely to be moved if he fails to live up early on.

Maxim Lapierre had a breakout season in 2008-09, winning the Jacques Beauchamps trophy as he upped his game. There is no knowing whether his play could slip back some, or has plateaued. It is unlikely that the club imagines him in a top line role, behind Gomez, yet he remains the team's most physical centerman.

Glen Metropolit is a prototypical fourth line center who understands his role and executes his work effectively. He will be challenged by Kyle Chipchura and Ben Maxwell at training camp, with the likelyhood being Chipchura will make the club as a fifth pivot, or pass through waivers on the way to Hamilton.

Down the middle, there could be a legitimate concern that there is little to push and challenge these four for pecking order, something the addition of Lang would change in a hurry. 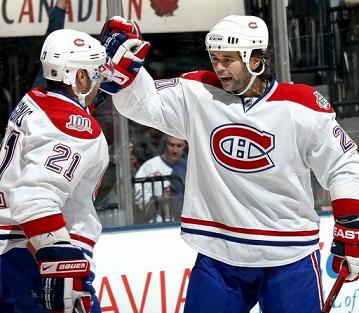 As he demonstrated last season, Lang is capable of shuffling between the top three lines at ease. He played 30 games less than Gomez, and at age 38, he also out scored him. He would make an ideal mentor for Plekenec, who may still be in need of mentoring. Lang's addition could also allow Lapierre to continue to develop at his own pace, without his sights set too heartily on an offensive role should Plekanec falter.

Salary wise, Lang is a unique fit as well. As a player over 35 on a one year deal, he is eligible for league paid - not team paid - bonuses. If he were to sign at a smart risk rate of a clean million, the Canadiens would still be left with required wiggle room for injuries, considering all the replacement parts come cheaper.

Finally, and this would be interesting, Lang might make an ideal captain in what is clearly a leadership vacuum. having him hold the position for a season would make sense while other leaders emerge.

It's surely a wild thought that a potential training camp walk on could offer so much to a team, nevermind being named it's captain, but Lang's case for such considerations was made last season, as the Habs best player for the first 50 games.

There's little to lose in such a scenario, lots to potentially gain.