A Day That Altered Habs History

Share All sharing options for: A Day That Altered Habs History 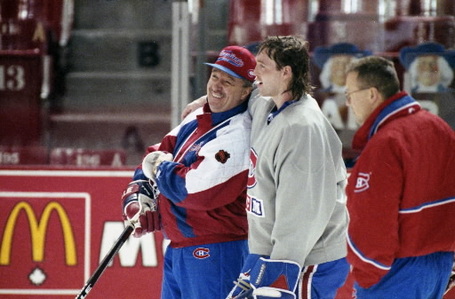 After Montreal lost a fourth straight game in which it scored but one goal, the axe fell on Demers and Savard.

Replacing the coach and GM with Mario Tremblay and Rejean Houle, the Canadiens responded by going on a 12-2 tear. It was at that moment when the bottom fell out on the team, and they managed but one tie in the next 4 games.

The next game would turn out to be the fateful December 5, 11-1 thrashing at the hands of the Red Wings - a game that would greatly alter the future of both goalie Patrick Roy and the Montreal Canadiens.

Wigge's article highlights the multitude of dilemas facing the Canadiens in October 1995, and while it points to Demers' demise days later, it does not foreshadow GM Serge Savard being thrown to the wolves as well. Savard, for the record, was canned for refusing to give up so quickly on his coach, The Sporting News article is below.

The Montreal Canadiens have learned a valuable lesson: Never let the luster of a shiny, new toy distort your perception of a bad situation.

With just over a month left in the lockout-shortened 1994-95 season, a good source told me, "If the Canadiens miss the playoffs, either Serge Savard, Jacques Demers or Patrick Roy will not be back next season. Maybe all three."

Instead, the Canadiens traded for French star Pierre Turgeon, who combined with Vincent Damphousse and Mark Recchi to excite the hockey crazed Montreal fans. The Canadiens still missed the playoffs, but there was a feeling of enthusiasm over the team's newfound offense.

The shiny, new Canadiens were exciting, yes. But they went 6-7-2 in the 15 games after Turgeon was obtained from the Islanders. Management was counting on this uptempo offense to cover up for the team's weak defense. But that's like trying to hide your worst fielder in right field. The opposition will find that weakness and capitalize.

When they had Eric Desjardins and Mathieu Schneider back there on defense, the rest of their defensemen looked OK," says Devils right wing Stephane Richer, naming off J.J. Daigneault, Patrice Brisebois, Lyle Odelein. "But without Desjardins and Schneider, they can be exploited - big time. They make a lot of mistakes in the own zone."

The Canadiens outshot the Devils, 41-17, last Saturday but lost, 4-1. It was Montreal's fourth consecutive defeat - the team's worst start since the Canadiens began the 1938-39 season 0-7.

Savard was met at Dorval Airport by more than 20 reporters last Friday after the team had scored just one goal in each of its first three games and lost to the Flyers, Panthers and Lightning by a combined score of 17-3. They weren't there to congratulate him for putting together another SUM Cup team, either.

"Hockey is like a religion in Montreal, you're either a saint or a sinner, there's no in between," Roy says. "I thought we'd be sky high to play the Devils, but there was no feeling or pride."

Demers couldn't persuade his team to play with pride late last season, when the Canadiens missed the playoffs for the first time in 25 years, and the same symptoms are present this season. That's why he is about to become the first coaching victim this season. Islanders assistant coach Guy Charron and former Flames coach Dave King are potential replacements.

"I got home the other day and my little boy called me to ask if it was true I was getting fired," Demers says. "I didn't know what to say."

The trades that sent Desjardins and John LeClair to the Flyers for Recchi and shipped Kirk Muller and Schneider to the Islanders for Turgeon and Vladimir Malakhov were unmitigated disasters last season. They not only stripped the Canadiens of their two best defensemen, but the heart and soul of the team, too. No coach would be able to fix this mess.

But listless play on the ice always spells the end for the coach. And the next phone call Demers gets from the Canadiens likely will be his last as coach of Montreal.