Share All sharing options for: Terry Harper, Patrice Brisebois both targets of boobirds 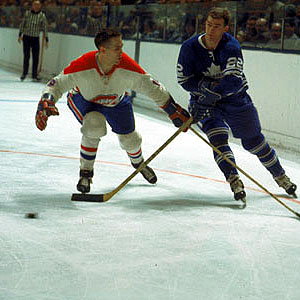 Terry Haper was the first player that I ever heard get booed by his own fans! Little did I know then - as a Habs fan who started watching games at age 7 in 1969 - that he's hardly be the last.

Perhaps I'm only partially qualified to draw a parallel between one time Canadiens' defenseman Terry Harper and one of more recent vintage, Patrice Brisebois. Like many other impressionable kids watching the Canadiens fourty years ago, amidst a truckload of Stanley Cup wins, what was retained in terms of player appreciation came through the eyes and language of an impassioned father glued to Hockey Night In Canada each Saturday.

Harper, in short, could drive my old man nuts! Dad loved to point out the smooth effectiveness of a J.C. Tremblay pass or rush, but could as easily be lured to cuss out Harper at any given turn. What frustrated my pop so, was that Harper had so little offensive game to go with his gangly cutting down of shooters.

I didn't get to have any long term appreciation for Dad's take on Harper, as he was traded to the L.A. Kings sometime around 1972. In comparison to Brisebois, it could be said that both he and Harper were underappreciated during their era's. Under different circumstances, both players seemed to have the innate ability to earn the boos from the Forum faithful.

Few players epitomized the Montreal Canadiens work ethic and sense of personal sacrifice better than Terry Harper in the 1960's. Conversely, no player received less respect from the Forum fans, who have been overrated as hockey connoisseurs at times.

The story concerning Harper below, is one of but two highlights I recall him from. The other is of him basically breaking the end glass with his face as he was crushed into the boards in a game against Detroit. 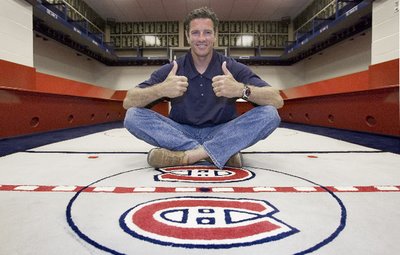 Harper was a sturdy stay at home type of defender, whose game was simplicity personified. Brisebois was in a sense, the opposite of Harper, in that he was surely more talented and capable of a bigger and better all around game. Still, Brisebois was at his best when he kept things simplest, often earning the heat of the fans when he found trouble in taking on too much.

Hindsight may well suggest that Harper was in fact underrated while Brisebois could be both overrated, and under appreciated.

The story below can be found on pages 223-225 in Chrys Goyens and Allan Turowetz' classic read "Lions In Winter". It testifies to Harper's abundance of character and resolution, and is one of about five highlights from the 1971 playoffs that are etched in my mind, clear as the day they happened. 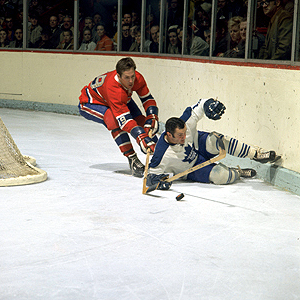 Not only is the story a perceptive one - it's a hoot, as well.

Goyens and Turowetz can take it from here:

Harper, a Regina native, was twelve years old when he was severely burned in an accident. For a while it was uncertain he would ever walk again, but with a quiet sense of self confidence combined with hard work, Terry built himself up and became a stalwart defender for his hometown Regina Pats.

He arrived in Montreal late in the 1962-63 season and went on to play ten seasons for the Canadiens. A 6' 2", 195 pound defenseman, he was the antithesis of everything the Montreal fans had come to expect from the flashier side of the sport.

Harper once scored as many as four goals in one season and even won a fight, a penalty box affair with Bob Pulford very early in his career. However J.C. Tremblay or John Ferguson he wasn't when it came to offensive prowess or intimidation.

The Boston Bruins Derek Sanderson perhaps said it best in his autobiography, "I've Got To Be Me": "Harper can't fight worth a damn but he's got a lot of guts and keeps coming back, although he usually gets the hell beat of him".

Another thing Sanderson could have said, but didn't, was that his Bruins could never beat the Canadiens when it counted because of players like Harper.

During the 1960's, when he was at his peak, Bobby Hull was asked about the defensemen who were toughest on him, at a time when Hull was shredding defenses every night.

"Terry Harper", he said, "plays me as well or better than any defenseman in the league. I can never seem to get around him."

One thing the so-called knowledgable fans overlooked in their merciless treatment of Harper was his skating ability. He was gawky, all angles, elbows and knees. But the forwards on his team who went against him in practice knew one thing: you couldn't get around him. Skating backwards, he put his flashier defensivemates to shame. Add to that ability a reach that could flick a puck off an attacker's blade from a seemingly impossibly long distance, and it is little wonder that Frank Selke and Sam Pollock ignored the braying of the red seat cognosenti for a decade. 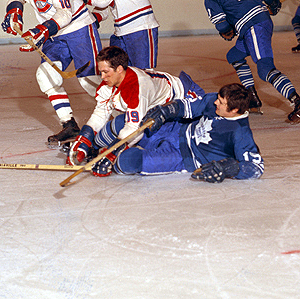 Just inside the blueline, Harper slid off yet another bodycheck and carried the puck behind the Chicago net. As he skated directly behind the cage, two Black Hawks smashed into him simultaneously. Falling, he still had enough leverage to pass the puck out in front of the net where John Ferguson was all alone in front of Tony Esposito . Ferguson made no mistake, and the Canadiens were on their way to a 4-2 win (and an eventual Cup).

A teammate, who prefers to remain anonymous for obvious reasons, summed it up best: "That was the best 'fuck you' play I've ever seen in hockey. It was all some of the players could do not to give the crowd the finger".

Harper disentangled himself from the two Chicago players and rose to the rare, for him, sound of a standing ovation as all of his teammates on the ice converged around him, rather than Ferguson the scorer.

In the stands, fans were cheering wildly, if not looking out the corners of their eye in semi-accusation at all of their confreres who had had the temerity to boo such a wonderful hockey player.