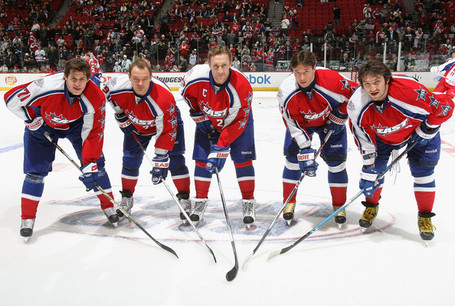 I was asked earlier this week by a Russian Hockey journalist Vadim Kuznetzov to answer some questions on the Canadiens uncoming season for a site called Tribuna.sports.com. I could pass that up now, could I?

Vadim's questions were good ones, and had me thinking fairly quickly. I first thought the answers would take time in coming, but it wasn't the case. So here goes:

Q: A few words about off-season. Did Canadiens become stronger or weaker during this summer? Who do you think is the best signing for your team and who's the biggest lost? You lost Saku and Alex Kovalev? How big is that?

From my personal opinion, and general consensus tends to agree, it is tremendously hard during this off season to assess whether the club is improved is not. While the players acquired are certainly talented, it is difficult with seeing them in games, to judge how they fill play as a group. Despite the skill, it just might be that the coaching change makes for the biggest difference in how the team goes forward. On paper, it looks as though the team is both younger and better, but games are not won on paper.

The highest profile acquisition was Scott Gomez, and it is said that trading for him opened the doors to signing Brian Gionta and Mike Cammalleri. The trio are definitely skilled offensive players, and many fans seem to be pointing to them tomake the most visable impact. However, perhaps a more subtle change, one that steadies several of the teams needs will make just as much if not more impact across the board. Jaroslav Spacek offers Andrei Markov a skilled and dependable partner he has not had for some time. Since the departure of Mark Streit, Markov has missed an equally sleek powerplay wheel at the point, and Spacek brings that, along with a better defensive conscience than Streit or Sheldon Souray before him.

The biggest losses were definitely Koivu and Kovalev, who for many represented the heart, soul, and spirit of the team. Koivu's leadership and fighting spirit will leave a void. There is hardly a consensus captain in sight. With Kovalev's loss, some fear it will be akin to shutting off the electricity in the Bell Centre. Montreal loved Kovalev, and there are few players in the game that can polarize opponants and fans like he. Ottawa are very fortunate to have him.

Q: Is Jacques Martin right coach for Canadiens or you would prefer to see someone else?

Time will tell. For the moment, it looks like Martin is an intelligent choice. The word most often used in describing what he brings is structure, something the Canadiens were sorely lacking towards the end of last season. Martin is also a disciple of discipline, another Canadiens concern. How well the team does will have alot to do with much players buy into his preaching of all around accountability. Martin's clubs in Ottawa were generally more offensive than he had been given credit for, and he will surely know how to bring the best out of the three new forwards acquired.

Q: How about Carey Price? In the end of last season he was booed by fans few times. Will this season be crucial for the young goalie?

Crucial might be an understatement. He could well be playing for his career. There is nothing more magnified than a flop in Montreal. The great potential in Price is there. The seriousness of his attitude has had ups and downs. He'll be looking for consistency from himself inside a roller coaster atmosphere filled with pressure galore. The good news for Carey is that a Martin coached team should make the defenseman in front of him more accountable. Price was left to his own devices too often last season, and when things went sour, his confidence erroded with it. That's not likely to occur again with Martin at the helm. 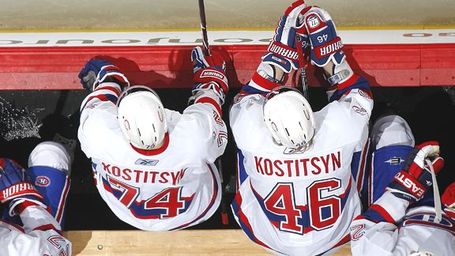 Q: Kostitsyn's brothers. How would you rate their last season? Did they come short of your expectations? What do you think will their next season look like considering all these changes in Montreal?

I think both brothers came up short in everybody's expectations, but then again, those expectations were quite lofty in some quarters. Sergei's set back could almost be predicted. He was barely a full season removed from junior. The year prior he made a quick jump to the NHL that in hindsight might have been premature. Often when young players make great leaps it is followed by sudden setbacks. It could be said that Sergei was not ready in 2008-09 for the rest of the NHL being so accustomed to him. He started out being easily baited into bad calls while being tested, and had a very undisciplined year. His season was a complete washout as progression goes, but he has the talent and fortitude to rebound.

In Andrei's case, the season was similarly deceiving but on a different scale. As a proven player, it was a valid expectation that his game would grow. The drop from 26 goals to 23 does not look significant on the surface, but it was in the areas of consistency and commitment where Andrei came up lacking. In flashes and short streaks, Andrei clearly demonstrated the potential he has, and fourty goals are not out of reach. In other games he could appear moody disconnected. The fact remains that his season was filled with distractions he must learn to get over. When linemates went into a funk, Andrei simply followed rather than find initiative in his own play. It's a common mistake made by the young, and one which he should not pass through again. He has the size and skill to be a dominant player.

Overall, the Kostitsyn's season was marred by overhyped off ice problems that never should have could into play. The whole blown up affair turned out to be nothing more than a rediculously zealous media, brandishing a story that never held water. The kids were clearly affected by it. Welcome to Montreal boys!

Q: You lost Saku and now Montreal needs new captain. I know you are tired of questions like "Is Markov good enough to become a captain" but still. Who would Montreal fans vote for - captain who is originally from Canada (Maxim Lapierre, for example) or All-Star russian defenceman who's been with the team for last 8 years?

Myself, I'm not tired of the Markov question, because I feel he should be the captain, without question. A poll on my site gave Markov a 2 to 1 edge in votes over Lapierre, and the seven other were not even close. Markov is now the longest tenured Hab and its best player. The team goes as he goes. He might not be the most vocal leader, and he might not fullfill the media's criteria, but he ought to be the guy until someone better emerges. Handing the "C" to a new player only makes sense when the choice is obvious, and there are no Mark Messier born leaders on the squad at present.

Q: According to Hockeybuzz cap stats, Canadiens only have 2 million left and they have to sign 2 players. Are we gonna see more trades from Gainey or he'll just get couple of guys with 2 way contracts?

Right off, I don't read Hockeybuzz, and hockey gossip puts me to sleep. Those numbers must be a few weeks old, as all players are now signed, with roughly a million and a half to spend. It's doubtful Gainey will make more moves. I gather he will want to see what this group can do first. After than, trades for impact players from capped out teams have almost become an oddity. I don't expect anything unless Vincent Lecavalier somehow becomes available and decides his lone destination would be Montreal. I'm not holding my breath, or running off to read Hockeybuzz.

Q: Your predictions. You might not argue that the Canadiens are playoff bound, but do you think they will make the Eastern Conference final this season. Will they have another bad playoff? Do you think anyone from Canadiens can fight for some personal trophy?

I feel the Canadiens are certainly a playoff team, but the Eastern Conference final would not be a prediction, it would be an all out technicolour dream. There's about as much chance of Moscow Dynamo winning the Stanley Cup. It could be a longshot to happen, but in such good fortune there would have be bad luck happening in many other places. It's very early to tell, but there is a sense a renewed optimism in Montreal.

Another bad playoff like last year, would again require Markov to go missing in the post season. Such was a recipe for disaster. I'd wager that it can win a round this time out.

The only candidate I can see in the running for personal hardware is Markov once again. He is among the top three or four elite defensemen in the game, and continues to get better each season.