Share All sharing options for: Baker's Dozen of Strange and Amazing Hockey Records and Distinct Achievements 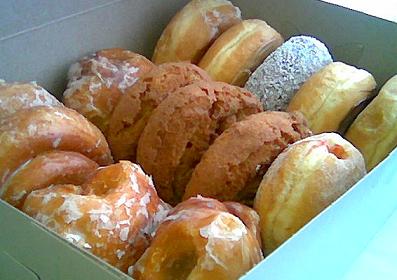 Everyone likes lists and records, and the notion came to me to combine the two yesterday. I started thinking not only of unbreakable records, but unique ones as well, especially those distinct enough that they define certain players.

Starting in 1955-56 with Detroit, Glenn Hall's string of 502 consecutive games played still amazes. Hall moved on to Chicago in 1957-58, continuing his string of straight 70 game seasons until 1963, when he pulled a muscle while dressing pregame. Add in that Hall played 49 playoff games without missing a beat during that run, and you have yourself one unmatchable standard.

Given that Hall had the habit of nervously vomiting before every game, this feat would also place him in the chunk blowing Hall Of Fame.

On New Year's Eve 1989, the Penguins Mario Lemieux set a high bar single game scoring mark by notching a goal in every manner possible. In a game against New Jersey, Lemieux scored at even strength, on the power play, shorthanded, on a penalty shot, and finally into an empty net. Not a bad night's work. Players of this day and age could match this beast of a performance and surpass it by adding an overtime or shootout goal. Don't hold your breath. 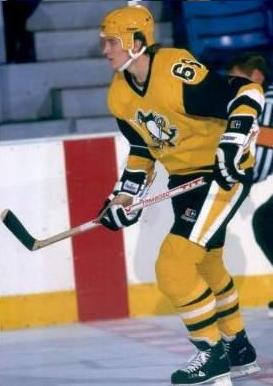 One Canadiens player actually scored three goals four ways last season. The player's name escapes, but he did it by scoring shorthanded into an empty net. Or was it a penalty shot? Someone refresh me, please! Either way, Mario's amazing night is pretty safe in the books.

While merely a modern day record, and not an NHL all time record, the six game consecutive goal scoring streak to start Penguins' Evgeny Malkin's career helped announce what he was made of from the get-go. Judging by the sheer rareness of arrivals of players in Malkin's calibre, who knows when his accomplishment could be matched. It's a magnificent feat, especially considering the pressure a highly touted rookie is under when coming into the league.

The standard set for first year players is even more unfathomable. Joe Malone was no rookie in 1917-18, and neither was team mate Newsy Lalonde the NHL's first season on record. Malone and Lalonde lit up the scoresheet like no duo since, each scoring in the Canadiens first seven ever NHL games. Lalonde was then injured, but it hardly slowed Malone down, as he ran the streak to a full 14 games.

While there can be no official count or recording, it has been said that legendary Bruins defenseman Eddie Shore had 19 scalp scars from stitchwork done to his noggin. Having read about his belligerent style of play throughout his career and his general demeanor after it, there can only be wonder why he wasn't skull whacked even more.

All told, Shore's entire body contained over 600 stitch marks. If he were playing today his nickname would be Cabbage Patch. 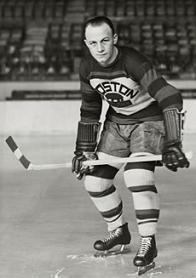 The Best at Even Strength

Normally, players who net in excess of 50 goals usually display great power play proficiency. It's never far fetched to assume that up to half their totals come with a man advantage. In recent years, that percentage may have dipped. Last season's PPG leaders were Alexander Ovechkin and Mike Cammalleri, each with 19. The former scored 56 in total, while the latter netted 39.

Such marks lend credence to Reggie Leach and Steve Shutt being absolutely deadly shooters back in the 1970's. Leach tallied an even 50 goals in 1979-80, of which only 5 were scored on the PP. Similarly, when Shutt fired 60 zingers in 1976-77, only 8 were with the man advantage. Imagine, 52 even strength goals in a single season. Impressive, but it's likely a scored broken by Greztky somewhere along the line. 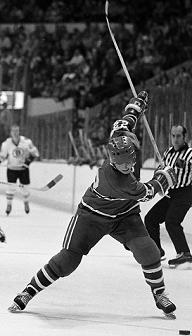 Okay, so this is more in with a record about hockey and not so much a hockey record. The Tragically Hip song about the coincidence of Bill Barilko's Cup winning goal in 1951 and the discovery of his body in 1962, have helped perpetuate the myth and legend that the Leafs did not win a Cup until Barilko's body was found. Not exactly true. The line is: "They didn't win another, till 1962, the year he was discovered."

For the record, Toronto finally reclaimed the Cup on April 22 and Barilko's plane was found on June 7. Great tune, nonetheless, but it's not as though the Leafs didn't win untill Barilko was found, it was simply coincidental being in the same year. If they had found Barilko first, Leafs fans of this day and age would likely be scouring the backwoods looking for any and all missing former Leafs. Still it was cool that lyricist Gord Downie, who is married to former Bruins GM Harry Sinden's daughter, worked it in to look like that.

Multiple 50 goal season have gotten more rare in recent times, with Alex Ovechkin being the lone sure bet these days. It is perhaps even more rare to score that 50th goal on one's birthday, as a player would need to be born one a specific date late in the season, and also play games on that date. Boston Bruins super sniper Phil Esposito managed to turn the trick three times (1971, 1972, 1974) in four seasons on his lucky day.

On the first and last occasion respectively, the goaltenders were Denis DeJordy of the Kings and Cesare Maniago of the North Stars. In 1972, Phil scored his 50th on brother Tony. What are the odds on that?

Perhaps it occurred to Herron that he'd best remove himself from Lafleur's range. He joined the Canadiens in 1979-80, and promptly set about killing the Canadiens chances at fifth straight Cup by fumbling the puck, leading to the North Stars winning goal that year. Only Lafleur has a place in their heart for Herron.

It was some forgotten player who produced a 24 goal, 6 assist season, inspiring someone to comment that while it looked like the forward wasn't much of a playmaker, he was a shoo-in for the Cy Young award due to the stats resembling a great pitching season. If you've ever wondered what the greatest goal to assists differential was in a particular season, look no further than Brett Hull's 1990-91 campaign.

Back in the day when Hull was spoon fed precision feeds from Adam Oates, he tallied successive seasons of 72, 86 and 70 goals. There 228 in all, and over those three years, he accounted for 125 assists - 103 less. The killer season was 1991, in which Hull scored 86 goals, which were 41 more than the 45 he assisted. The differential would almost be embarrassing in some ways, but Hull the shooter was no puck hog. He'd pass the puck to Oates, who'd simply slide it right back at the first opportunity. Why the Blues broke up that dynamic duo is still one of hockey's great mysteries. 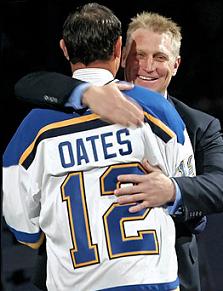 Newsy News When The Habs Were New

If there were a record for most team firsts, the eternal Newsy Lalonde would surely own that section of the Canadiens record book. Going back to 1910, Lalonde registered all of the Habs first goal, first hat trick, first penalty, first injury, and first scoring title. In the course of his Montreal time, Newsy also netted the team's first five and six goal games. In 1916, while playing, he became the first coach to lead the team to the Stanley Cup. In 1933, he was the first former Habs player hired as full time coach.

A fairly crafty customer to deal with on and off the ice, Newsy was most surely the first player to piss off his opponents via innumerable tactics, such as spitting chewing tobacco juice in a goalies eyes. In Habs lore, Lalonde was also the first player on the club to be fined by both it and the league, and the first to be suspended by the league for actions on the ice and by his team for behavior off it. No surprisingly, he was the first Canadiens player to hold out for a better contract, something he did almost annually.

From the 1994-95 season, up to the present time, Martin Brodeur has started every playoff game in goal for the New Jersey Devils. Being his backup is a lonelier proposition that Maytag repairman. As Brodeur regularly starts in excess of 70 games per season, it's little wonder that backups hardly see any playoff action.

While closing in on 160 consecutive playoff stars, Brodeur has only given way between the pipes four times; once for 7 minutes to Scott Clemmenson in 2005-06, twice to Corey Schwab for 28 minutes in 2002-03, Chris Terreri 8 minutes in 1994-95, for a grand total of 43 minutes. Wonder if there's an alarm clock on the Devils' bench?

Willing To Trade: One Penalty Box for a Pair of Swimming Trunks

Former Habs bad boy and Michael Phelps wannabe Chris Nilan has never been a stranger to on ice mix-ups. A battler with the heart of lion, Nilan finished his NHL career second all time to former-Leaf Tiger Williams, with a regular season and playoffs total of 3,584 sin bin minutes. That's two days, eleven hours, and 44 minutes, if you're counting. Small miracle that Nilan purchased the Forum penalty box when it came up for auction in 1996. 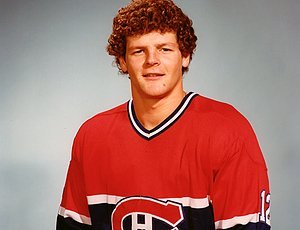 It might not have been a Williams record Nilan was after on March 31, 1991, while a member of the Boston Bruins. Perhaps to sought to equal, in his own distinct manner, Darryl Sittler's 10 point. Of course, Sittler and Nilan are a million gene pools apart, but it could be guessed that Nilan would be happy with 10 of anything. In a game against the Hartford Whalers, Nilan came unglued and unhinged, and left the game with a record of envy in some parts. Ten penalties were assessed to Nilan, including 6 minors, two 5 minute majors, a ten minute misconduct, and a game misconduct. Oh yeah, and he broke a bunch of stuff on the way out too!

Ken Doraty, a marginal player for the 1934 Toronto Maple Leafs might hold the distinction of having hockey's most unbreakable record. On January 16 of that season, Stittsville, Ontario's Doraty registered an unbelievable overtime hat trick in the era of the 10 minute regular season overtime.

The overtime length was rescinded during wartime and when re-instituted decades later followed the sudden death format of the playoffs. Hence, Doraty's trick is impossible to match.