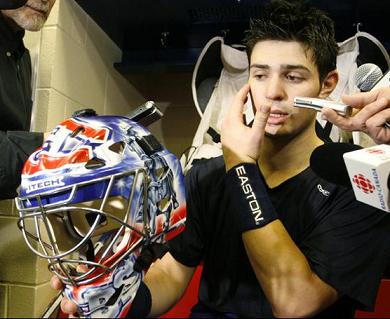 Here is a random list of good happenings, which, should at least seven occur, the Canadiens could have a very strong 2009-10 campaign. In every individual case, of course, each item here is in some way crucial to the team's success moving forward. In summer, when hope springs eternal for all teams, here's the optimistic upside we'd all love to see happen. 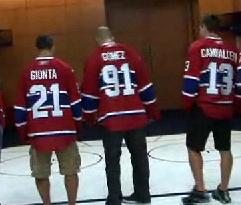 Six off season free agent acquisitions reflects a massive overhaul the likes of which the Canadiens have never dealt with before. Add in Scott Gomez via the major trade route, and the influx of fresh blood is something akin to the "Twilight" series. Blowing up the blueprint has never been the Habs modus operandi, and with unchartered waters comes inevitable apprehension and fear. Nonetheless, Gomez, Mike Cammalleri, Brian Gionta, Jaroslav Spacek, Hal Gill, Travis Moen and Paul Mara are all well established talents whose reputations precede them. By design, they now represent one third of the Canadiens hockey club, and the risks inherent in such a drastic shift involve chemistry and a multitude of other variables. No one's kidding anyone by stating this group of seven will be under the hottest of spotlights, and expectations being what they are, some would say it foolish that all seven together will match or surpass previous heights. One bottom line appraisal for this refreshening of the club, is that it will band the new group together as one, while bringing the older guard together in a separate supporting faction. Both will want the other to succeed, as motivation and support wear off positively. Wins will unify, and if the new Habs do their thing, an "all for one and one for all" attitude will quickly set in. Wins will also remove a certain pressure from either faction, and if such should, the gelling in the team sense should help all members settle in and settle down in short order. 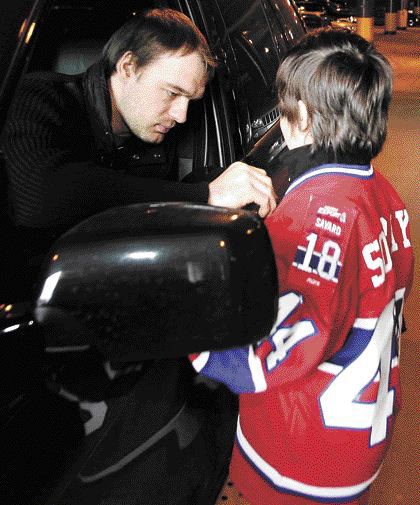 Markov is the Habs hub. He is without question the gear that moves the Canadiens wheels. The Canadiens season ended without him, and it was nightmarish and grim. With a solid club surrounding him, there could be a Norris Trophy in Markov's future, and all he needs to do is continue to be what he always has been. Much of his contribution to the team will depend on the power play unit the Canadiens assemble. New additions will provide all kinds of alluring options for Markov, and hopefully those additions will quickly sense that he is the general. In a sea of change, Markov remains the constant.

8 - The second tier supports the first

One nagging issue concerning last season's club involved the dropoff in productivity and commitment from many elements that were expected to both lead and support. Several of the major players who gave consistent efforts have departed, while all but two of last season's underachievers remain. While the club acquired several top line assets, contribution from the support staff will still be of prime importance. Plekanec will need to step up, as do Andrei and Sergei Kostitsyn. Roman Hamrlik needs to be more consistant and reliable. Maxim Lapierre and buddy Guillaume Latendresse should continue to progress and contribute. From these, it's all about pushing. Jaroslav Halak has to make life difficult for Carey Price with every start. Travis Moen will have to show Georges Laraque that there is little courtesy involved in dirty work. Hal Gill can mentor Ryan O'Byrne on the intricacies of the big man's game. The contribution of the supporting cast will enable a safety net of sorts for when the players with starring roles spit and sputter - which will undoubtably happen on occasion. This was sore spot last season - a gaping open wound. With a year's learning and experience under their belts, it should not happen a second year running.

Price has worn many tags in two short seasons, from franchise and saviour in promise, to thouroughbred in his defence. His lower points have been excruciatingly documented, and he has not always handled the rough going well. While he may not have lived up to early lofty expectations, he maintains all the tools to see him through. The system coach Martin will seek to build is one that should fortify Price's strengths. Should a more responsible team effort solidify what Price brings, a return to form is highly likely. If this is the case early on, expect Price to finally fulfill his weighty buildup. And that can only be a good thing. A great season for Price would equal a great year for the Habs. 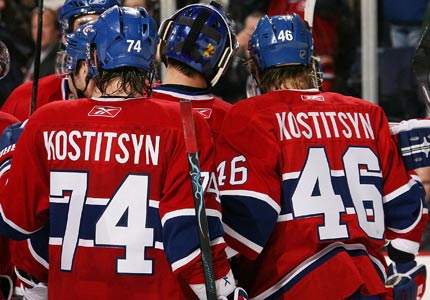 6 - The Kostitsyn's steer clear from all controversy

The brothers K could not have a more miserable season, could they? Both bros are extremely talented kids with tons of upside. If the fates cut them some slack, perhaps everyone will get to appreciate all they can bring once more. Confidence for Andrei and maturity for Sergei are keys, and what they could unlock together would be a thing of beauty. It might be wise to pencil them both alongside Plekanec, as familiarity for all three wouldn't hurt their cause. Keeping in mind that young talent sometimes staggers after unexpected leaps forward, the grounding in reality that last season represented, can only help bring out a defined determination in the brothers.

Like his style or not, all Jacques Martin coached teams have had strongly defined defensive identities. In hoping to make the club one that is hard to play against, expect the Canadiens to be somewhat boring at times, especially on the road, in order to achieve this. Another trait of Martin coached teams, is how quickly they are able to turn opponent's error into goals. Martin likes his players in constant movement, especially when speed is used to grind other team's gears to a standstill. Martin has been given a lineup flexible enough to achieve his ideals, but his teachings will only be appreciated if the offensive side of it capitalizes.

4 - The kids on the farm bloom

With many of the current Canadiens on one year contracts, a watchful eye will be kept on the Bulldogs. Players such as Ben Maxwell, Yannick Weber, P.K. Subban and Max Pacioretty would do themselves good to have near dominant seasons and also help out big time with the team's transition one year from now. Much of what they achieve, will determine the direction the team takes in the immediate future. In the meantime, their progress lends awareness to those whose jobs may be on the line.

3 - A lot less injuries would be sweet

With all the new elements on the club, the one thing that could really mess up plans would be a number of injuries to key componants right out of the gate. There is an abundance of talent in the lineup, but with so much of it unfamiliar to itself, it would catastrophic if this team is still looking for itself, and intangibles such as identity, cohesion, and chemistry by mid season. 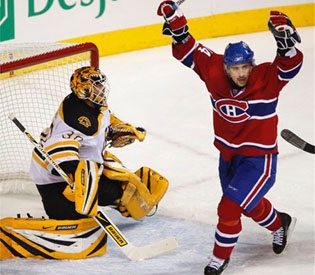 When Plekanec is confident, he can play with the poise of intuitive and instinctive vet. Any player can have an off year, and Plekanec was brutal in long stretches last season. He also went on one wicked tear in mid season, proving that ability certainly was not lost. The key for him is to play without the fear of mistakes, and bounce right back after committing one. A coach such as Martin should help a player such a Plekanec get the best out of himself.

As the deal that triggered the Canadiens wholesale changes, all eyes will be on Gomez with expectations to produce strong numbers. Due to his inflated salary, he will come under heavy scrutiny by fans and media. Should he produce at close to a point per game clip, it will go a long way towards removing much of the pressure that will be on him. A productive campaign will also translate into success for his wingmates, which is also a crucial point. Were Gomez to have a sub par season, it would likely drag down members of his line, and create a constant shuffling of trios.