Share All sharing options for: Nevermind Gomez and Koivu, the first Canadiens language crisis was iginited long ago by James "Rocket" Power

Recent Canadiens acquisition Scott Gomez, who will soon become the highest paid player in Habs history, has apparently signed up to take french courses. In a report from RDS yesterday Gomez stated that it is in his plans, and added that the only problem he foresees is rolling those tricky "rrrr" sounds of his tongue.

That's great news, and it should accord Gomez a certain amount of respect for tackling a challenge that is far from easy. Here's hoping that he follows through, succeeds in fair measure, while being extended great slack as his goal progresses.

While it has never been neccessary for a Canadiens player to speak the local lingo in order to be considered an on ice success, it does help to a certain extent in removing the distractions of such a demand from certain well identified Quebec media quarters. Should Gomez manage well enough to toss off the occasional phrase in french, it would then go a long way towards alleviating the uncomfortable notion that the highest paid Hab ever has no awareness of local culture and clientele. 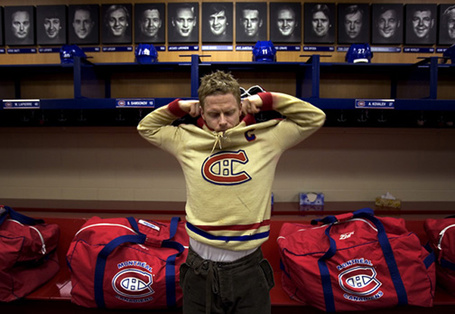 Like it or not, this was a constant nag directed at long time Habs captain Saku Koivu, who, contrary to popular belief, did manage to learn some french, but never felt comfortable enough to speak it publically. One can understand the six blade knife's many dual edges in dealing with the issue. Perhaps Koivu, whose children are fluent in in french, had enough respect for the language, that he felt ill at ease with bastardizing it in the media on an almost daily basis. It is very possible, that a man such as he, had enough respect for the local tongue and ears, that he took a flyer on failing with something that would be so combustible with a public he highly respected.

On a personal note, I can understand such a sentiment. While I consider myself fluently bilingual, I have at times sensed a particular snide reaction to my accent while conversing in my second language while in Quebec. It's not something I sensed from many, but it was enough of a feeling to cause me occasional discomfort and consternation when on Quebec soil. Contrarily, I've also received a very sympathetic vibe (more often than not, from females) when I endeavor to speak it. Certain citizens appreciate the effort more than others and the reactions are as individual as individuals go. Let's just say I can relate to Gomez tackling the rolling "R" sound.

When it comes time for Gomez, an American of Alaskan and Mexican descent, to offer phrases in Moliere, let's all hope he isn't placed in front of a media firing squad if his first steps include phases such as:

"When je was an enfant, je sometimes dore un siesta in mon igloo."

As previously noted, the french question is an age old diatribe that from certain high brow quarters, will never relent. Dave Stubbs of the Montreal Gazette and Habs Inside Out, touched on that notion yesterday upon news that Gomez would be learning french, reminding readers that such negative reactions are both predictable and depressing, considering that they emit from the same consistent blow hards and fog horns.

Stubbs knows, appreciates and understands Habs history as well or better than the usual run of the mill die hard fan. If one can read between the lines, Stubbs was surely pleased to learn of Gomez's intentions. Dave likely also felt the knife's duller edges when opinions on Gomez's comment ran the gamut from the player's deed being nothing more a public relations move to a politically appeasing gesture on the player's part.

Stubbs wasn't wrong in the least in suggesting that the controversy is as old as the Canadiens themselves.

In that sense, for "Exhibit A", fans must travel back in time to 1911, when the sentiments of Quebec nationalistic protectionsim, first reared their ugly zit pocked head, two seasons in the Canadiens evolution. There was irony and inconsistancy then, as there is now. 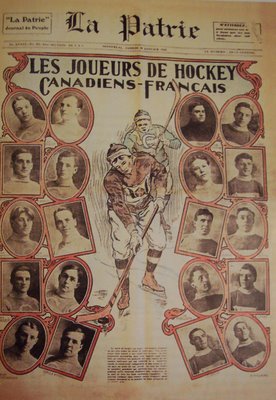 If ever you thought that french language issues and concerns were ingrained into the fabric of Quebec thinkers and Montreal society for longer than you can recall, you are absolutely right.

In regards to the Canadiens and hockey in the province of Quebec, there is still the opinion in some quarters that the Canadiens require players of French Canadian descent in order to retain it's identity and prosper accordingly.

It's the kind of hogwash that amuses true Canadians and Canadien fans, while also being the type of fuel that enfuriates and ignites sparks for those with more nationalist sentiments.

I posted much of the following content here, this past January 5, after reading the D' Arcy Jenish book "Montreal Canadiens - 100 Years Of Glory". That particular posting is being refreshed here today, tying into the Gomez storyline, and the HIO piece yesterday.

Last year, upon reading the Jenish book, one of the more captivating passages dealt with the issue of the creation of the club. Those familiar with the Canadiens origins know that the club's creation owed to a need to fulfill amongst the french speaking populace, a team they could identify with, refer to and find reflection in as their own. The initial chapters in the Jenish book discuss these origins in minute detail, and it is fascinating to learn that the french language question was there from the moment the club won the first game in its history.

It first began in 1911,  with a player the Canadiens acquired named James "Rocket" Power.

A quick summation of the events of 1909-10 and beyond, at the occasion of the Canadiens birth:

The original Canadiens team, idea,  was the brainchild of two men, Montreal Wanderers part owner Jimmy Gardiner, and J. Ambrose O' Brien, owner of three hockey clubs in the Ottawa region. Both men were enraged at being left out of the newly formed Canadian Hockey Association, and they sought to create their own rival league. All that was missing was a team of french players in Montreal to compete with the CHA rival Montreal Nationale. Le Canadien, as they were then known, survived that first 1909-10 season due to O' Brien and Gardiner's National Hockey Association quickly being deemed a superior league to the CHA early on. After a dismal 2-10 season in 1909-10, the club was turned over, through many complications, to local Montreal interests headed by wrestling promoter George Kendall Kennedy.

Since the outset, it was an NHA mandate to stock the Canadiens with only French born and bred players. The team had lost money in its very first season of operation, in one part due to the fact that the better french speaking players had the club over a barrel in salary negotiations. By NHA mandate, french players could only dress for Le Canadien, and no other club.

In the team's second season, more money was dispersed on player's salaries, and with the addition of Georges Vezina in goal, the club became a rabid draw. The french media covering the team, La Patrie, Le Devoir, La Presse and others, adopted the Canadiens as their own. In fact, after the team's very first win in year 2, Le Devoir sports editor Tancrede Marsil marvelled at what could be achieved with players from their so called "country"!

In season 2, owner Kennedy made what was perceived as a rare public relations mistake. In February, he traded for the Quebec Bulldogs James "Rocket" Power, a defenseman of Irish - Canadian heritage. At Le Devoir, journalist Marsil fumed! 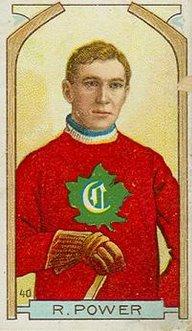 He regarded Power's acquisition as betraying the clubs principles - which was to to dress an all French lineup. In Marsil's slant, there was no place on the team for English - Canadians on a club that stood to represent french Canadians. Many readers of Le Devoir agreed, and disagreed with Marsil.

One lengthy response was delivered by reader J.W. Clement, who accused Kennedy of "polluting the character of the Canadiens and of creating a deplorable and ill - advised precedent by allowing Anglo - Saxon blood to infiltrate this club which we are proud to call our own."

Kennedy, Clement went on, "does not understand, like us, the national pride bequeathed to us by our forefathers. 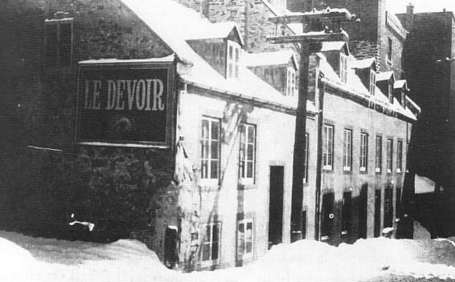 It was an imaginative stretch for a club that managed only an 8-8 record over 16 games. But the issue of nationality was far from cut and dried, as another reader, identified as M.D. pointed out. He noted that Edouard "Newsy" Lalonde and Eugene Payan who were on that edition of the team may have fhad rench Canadian names, barely spoke the language and were English in outlook and temperment..

James "Rocket" Power, on the other hand, had an English name, but spoke perfect french. According to the reader, Power was "one of us, by his language and his French Canadian character."

Imagine, English outlook and temperment versus french character determining a roster spot on the Habs!

Ninety - nine years later, a similar stubborness, is alive and well - not a lesson learned in sight.

Back in 1911, in the course of a couple of seasons, the issue of language on the Canadiens faded away for a good while.

James "Rocket" Power was not resigned in 1911-12, but prior to the start of the 1912-13 season, Kennedy and the Canadiens argued for, and won, the right to dress two English speaking players per season. The remaining NHL clubs were henceforth allowed two French speaking players on their rosters as well.

When in 1911-12, Kennedy signed defenseman Pud Glass to a contract, no one - not Marsil, not even the fans, and none of the NHA league governors - complained.

Apparently, Marcil and his readers must have decided above all else that winning was most important.

It was a lesson learned 98 seasons ago. Still today, to some, it has not sunk in.

In 1916, Goldie Prodgers scored the winning goal that would bring the Canadiens their first ever Stanley Cup claim. In 1924,  a player named Howie Morenz lead the way. Morenz, and his prime accomplice, Aurele Joliat, were still around when Montreal won Cups in 1930 and 1931, backstopped by goalie George Hainsworth - never to be confused with the premier of Quebec.

True, Maurice Richard, Jean Beliveau and Guy Lafleur were Quebec born, french speaking stars. Big pieces of many winning team puzzles, there has never been a shred of singular proof that they had a monopoly on hockey passion.

One could write a book, but it might never temper the thick skulled allegiances of the ignorant.

On that matter, life itself is still awaiting a cure.

Meanwhile, the Detroit Red Wings have won four Stanley Cups in 12 seaons without a Michigan born player on their roster.....