Share All sharing options for: Carry On My Wayward Habs: Cheering for dearly departed former Canadiens

I have been a fan of the Canadiens since 1971, but began watching televised hockey around 1969.

I didn't know much about anything back then. The Beatles were bugs, Woodstock was a Peanuts' cartoon character, and I thought it was a funny thing when Mom caught her tit in the wringer of the old washing machine.

In watching hockey - slightly before my imagination was stolen by Guy Lafleur - I had two favorite players, if that is possible. They were Bobby Orr and Habs goalie Rogie Vachon.

This was a year before my CH team allegiance set in, and when you are all of nine years old, the concept of a hockey trade is hard to imagine. In that era, players remained with their teams in good times and bad, like families did - most of the time.

I think alot about those innocent times, moreso now perhaps because as I grow older, the changes within sports makes those times seem simpler and more pleasurable, maybe even less confused and conflicting. It might not have to do with a particular longing for that innocence - I just think that everything forms a person's mentality is somehow defined by events in the parameter years from 9 to 13.

I was almost 10 when the Canadiens no longer needed Rogatien Vachon after Ken Dryden's 1971 Stanley Cup heroics. I had become a full fledged Habs fan by the summer of 1972. I'd seen a new hero - Guy Lafleur - play with the Quebec Remparts twice by then, and began consuming hockey knowledge at every turn.

I had yet to see a favorite player traded at that point, but sometime that fall, Rogie became an L.A. King. I learned about it weeks after it actually happened - there were no immediate internet Tweeter alerts in the day - and it shocked the bejeesus out of me to see Rogie in purple and gold, as opposed to bleu, blanc, rouge.

It felt traumatic. I did not quite understand who the trader was. Who betrayed who stuck in my craw, and ate me up. I might not have known a whole heck of a lot nearing ten years old, but looking back, the concepts of loyalty and family most surely were among my values. I hated that moment, and for a long time, I misguidedly blamed Dryden in part for it.

After one period that game, of seeing Rogie in purple wearing the King's crown logo, I bolted from the house, to find friends outdoors.

In that time of my youth, my friends and I enjoyed a game we called spy. It began innocently enough, as were just four kids hopping backyard fences looking for lit up windows we could sneak a peek into. Maybe we'd see Jimmy playing with his sister's dolls or Marc's older sister coming out of the shower with a bathtowel around her. The lame stuff of schoolyard jokes and giggles.

The night I learned of the Rogie trade, I wasn't up for a whole lot of fun. After doing the backyard peekaboo spy thing for a half hour, I sought a quiet lonely refuge atop a friend's garage porch. As I was quietly composing the notions of my angst there, a bright light came on in the house next door. What I witnessed in the following minutes, wrapped a hockey trade and betrayal into a tight emotional package. I had a ten year old TMI experience, with a front row seat. Let me just suggest that Jimmy's father was a truck driver, away on long hauls, and that Marc's father - a police officer - was on a different beat that night. I learned more than I needed to about life in the next twenty minutes.

Trades in hockey soon became equated with some sort of betrayal for me. I recall being a triffle miffed at the Canadiens dealing away Phil Roberto, who had assisted on Jean Beliveau's 500th goal. Then went Chuck Lefley, Chuck Arnason and Bobby Sheehan, all players I enjoyed, albeit briefly, in a Canadiens uniform. In time, as more and more trades passed, the betrayal sense, while remaining instilled, was numbed.

A friend of mine later experienced something along the same lines, perhaps more to do with separation anxiety than anything else. His parents were going through a rough patch during an off and on marriage, and in the midst of him being shuffled between mother and father, his favorite Canadiens player was traded away. It made no difference to my friend that the Canadiens had improved with the move, he became a New Jersey Devils fan when Stephane Richer was dealt there in 1992. Richer is long gone from the Devils scene, but my friend is still a New Jersey fan. 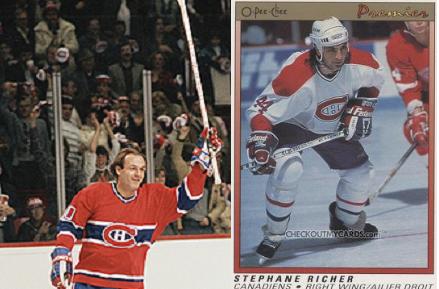 A player I coached in 1995 was a big fan of Patrick Roy. His father had some connections to the Canadiens and bought a Patrick Roy jersey for him and had it signed. He was so upset, just days later, when the Canadiens traded him to the Colorado Avalanche, that he threatened to burn the jersey. The father found it, hid it, and then it disappeared. The son thinks it was stolen, the father believes his son torched it but never wanted to say.

This young boy loved the game, but after a weekend of indifferent play for our team, I had to sit him down for a talk. He was completely disillusioned by what the Canadiens did to Roy, and it totally poisoned all of his hockey thoughts. He was emotionally devastated, and stopped coming to games. Our team missed him greatly, as he was a kid able to pop a couple of goals in every game. When one of our players suggested buying him an Avalanche jersey with 33 on the back, we found a common solution to our problems. The boys on the team raised close to $60 and I put in the rest. When we were finally able to convince him to come to a game, we gave him his present and told him he was now a full fledged Avalanche fan. 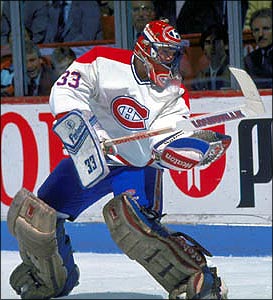 I sure didn't hurt that Roy went on to win another Cup that season. As summer neared, his father somehow contacted Roy to get the Avs jersey signed. Roy wrote back that he would be in Montreal at a certain time for a Ronald McDonald House function, and they met up then. It was an unforgettable moment for this kid, who got to meet his hero, get his autograph, and be thanked for his support. The gestures undid a breach of faith. All fans should be so fortunate.

I'm sure that any hockey fan has seen other fans wearing the Roy jersey over the years. When it comes to some people, their allegiance to certain players are stronger than those of a team logo.

After Rogie was dealth to L.A. I became a big fan of Dryden, once I got over the trade. When Dryden sat out the 1973-74 season, I was miffed at the Canadiens once more. Admittedly, I didn't understand a thing that was going with Dryden's negotiations, I was just peaved he wasn't there. I vowed I would never again cheer for the Habs, and resolved to choose a new favorite team between the Boston Bruins and Philadelphia Flyers. Obviously, I couldn't quite do it. When Dryden returned to Montreal, and the team ran off a succession of Cups, I never confronted my own team allegiances again.

When Pete Mahovlich was traded to the Pittsburgh Penguins, it didn't bug me much. When other pieces of the Canadiens dynasty were dealt away, I had little reaction. Guy Lapointe, Serge Savard, Steve Shutt and company, left one at a time, and by 1984 all that remained of the greats were Guy Lafleur, Bob Gainey and Larry Robinson. I knew what lie ahead.

Shortly into the 1984-85, my father handed me a Montreal Gazette and said "Read this!" Red Fisher had a column proclaiming that Lafleur was about to retire. When it happened a few days later, in mid season, I was crushed. I couldn't imagine hockey, or the Habs, without Guy as part of it. Watching games from then on, left a huge void. I was miserable, and so were the Canadiens. Fortunately, things turned fairly quickly, and the Canadiens were back as Cup champions - with Roy this time, as the conquering hero.

Oddly, by the time Roy had his run in with Mario Tremblay, it didn't devastate me at first. As a coach myself back then, I understood there were two sides to this particular equation. The mess looked inevitable in many ways. I likened the outcome to a battle between two caged roosters. I hated what happened, knew how much it sucked, but also grasped that these things could happen in sport.

I was much more riled when Montreal traded away Mathieu Schneider and Kirk Muller a season later. Beyond not liking the New York Islanders players the deal returned, I had a fondness for the departed that went a little deeper than others. Schneider had played for my hometown Cornwall Royals, and was the first local product of sorts to make the Habs. As for Muller, his number adorned the Habs jersey I owned. I found it unthinkable and unreasonable that the Canadiens would trade a captain, never mind a player recently signed to a long term deal.

Muller's number 11 was never pealed off the back off that old jersey, and that had as much to with Kirk as it did with the player who would soon fill it - Saku Koivu.

From 1995 until today, there have been few players whose name and number would be worthy in my heart of having the jersey treatment on my shoulders. Koivu was the one guy for me, that deserved it from the day he landed in Montreal. For different reasons at different times, I'd have placed Alex Kovalev's 27 on there, or even Jose Theodore's ugly 60 on my back. Doug Gilmour, for a bunch of personal reasons, could have found his way there too. Instead, his became the number I chose for my daughter to wear for the past five seasons in hockey.

My old shrunken Muller / Koivu jersey bares our family name these days - not one of a player - as both girls have worn them to school on occassion. It is basically the property of my youngsest now, as she's the only one who fits in it.

These last few days, I have wanted badly to wear it again, just once more.

I pulled it over my shoulder when I thought no one was looking, and heard giggles coming from around the corner. So much for that.

I thought of the local sportingwear store at the local mall that has all kinds of Canadiens centennial paraphernalia at exorbitant prices. Last night I took a spin there and sure enough, the Komisarek, Kovalev, Higgins and Koivu t - shirts were on at half price. I couldn't help myself.

Rogie Vachon, Patrick Roy, Kirk Muller and Saku - they will always be Canadiens in our hearts. They have not departed this earth. They only went on to play in other cities. When it happens, it's rough for a while, but like it or not, most of the time fans get over these things fairly quickly.

I'll definitely cheer Koivu on no matter where he plays. I'll get keeping an eye on Kovalev as well.

Perhaps another Canadiens player will capture my allegiance soon. It could well be Andrei Markov, who I've always had great respect for.

Maybe if the Canadiens do the right thing and elect him as captain, I could see myself with a big long 79 on my back.

As difficult as the past two weeks have been for Canadiens fans, the players move on at times, and so do we.

I think it happens by neccessity.

How long do we wish to be miserable for, after all? 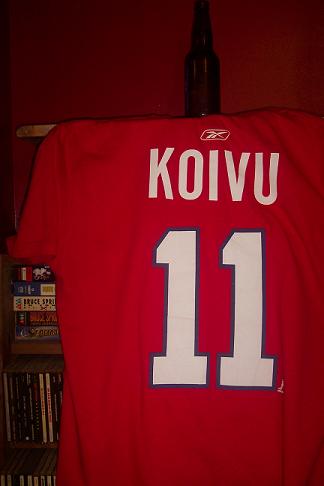