Cruising the Habs Exhibits at the HHOF

Share All sharing options for: Cruising the Habs Exhibits at the HHOF 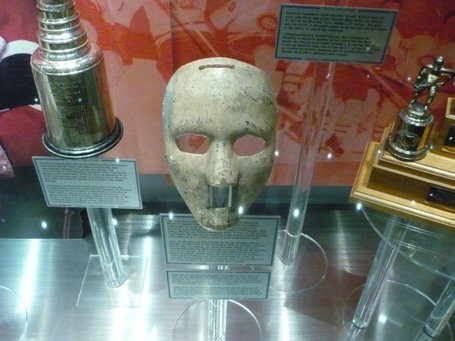 Kevin Van Steendelar of the "Ya! The Habs Rule!" site recently did something I have been longing to do for ages - visit the Hockey Hall Of Fame in Toronto.

When I've told people in the past, that I've never been, they are as surprised as they should be. My reasoning for never having gone is that the HHOF is in the wrong damn city. Having the Stanley Cup on display in Toronto is akin to having Disney World in Ottawa - but that's a whole other matter for another time.

Kevin's post on his trip is absolutely beautiful. From appearances, he spent a great deal of time among the Canadiens exhibits, which likely make up about half the building. Kevin did a great job documenting his every step and took about a hundred photos along the way - two dozen of which are at the post, with the remainder on a Facebook link.

One day, I plan to visit the HHOF, but first I have to hatch a plan to steal the Stanley Cup and bring it back to it's rightful place. Anyone know a Phil Pritchard lookalike?

Until I make it up, this post of Kevin's will unsure my envy. Nice work buddy!