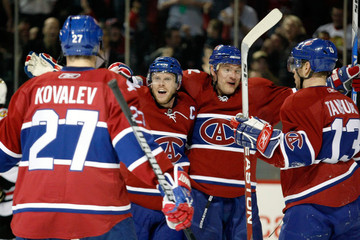 I recently saw a list of remaining free agents by position and it struck me quite oddly that in all positions except goaltender, the highest paid player left in each case was a Montreal Canadien.

Of course, the consensus now is that these players are overevaluated and hence are overpaid at those numbers.

Things are quiet on the Tanguay front - he who ended the season with a shoulder injured that hampered his only campaign in Montreal. I gather it is something about Habs GM Gainey passing him over like an afterthought that is making teams shy away.

Koivu and Kovalev for their part, have received offers from other teams and have yet to strike a deal. It is told that the former Canadiens captain had a three year offer from the Minneota Wild, and turned it down because it wasn't four. Kovalev - as is now common knowledge - buggered up a leverage play after verbally agreeing to a contract in Montreal, before shopping his numbers off to the Los Angeles Kings. With the Kings acquiring Ryan Smyth two days back, it sealed Kovy's fate on the west coast.

Since that time, it's all been speculation and rumours concerning the former Habs. Koivu has talked with three other teams, two of which are said to be the New York Rangers and New Jersey Devils, and Kovalev's name has been mentioned in regards to the Washington Capitals.

Two days back, as I was compiling a listing of teams by cap space, it occurred to me that there are a half dozen teams that could scoop up the entire Koivu, Kovalev and Tanguay line should they so desire. In fact, the top five clubs - the New York Islanders, Phoenix Coyotes, Atlanta Thrashers, Nashville Predators and the Rangers - all have between $23M and $16M left to spend, without any pressing returnees.

It's one of those things that make you go "hmmm!"

The Tampa Bay Lightning at around $14M and the Columbus Blue Jackets at $13M could consider such a thing as well.

A little further down, are the Toronto Maple Leafs at $12M - scary thought, no?

One thing is certain, there are a good deal of Canadiens fans with the seperation blues over the team parting with Koivu and Kovalev. There are online petitions for the team to find a way to retain either or both. There will even be a demonstration at the Bell today in the Kovalev case. Photo courtesy of Rue Frontenac. 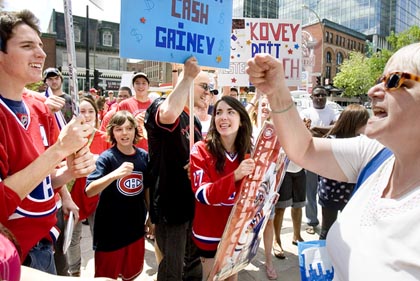 Maybe the fans should move their demonstration to Kovalev's house in Connecticut. They might have better luck with asking the player to take a pay cut. Yup, fat chance!

As far as scenarios go, the Islanders could make one hell of a splash and upgrade their team in one fell swoop with the aggressive signing of an entire line.

The power play on the Island would be killer, if you add in Mark Streit and John Tavares!

With Bob Gainey adding five players in the Canadiens two day extreme makeover, fans have been left thirsting for more news regarding the club. With most of the business taken care of in one day, there is little left to be done, other than get the four remaining RFA's under contract in the next few weeks.

The french newspapers have all reported that defenseman Philippe Boucher, who just won the big mug in Pittsburgh is interested in joining the Canadiens. There's no word on such a proposition being mutual. Boucher admits he's had no calls as of yet from any of the other 29 teams.

Mathieu Dandenault would prefer to remain with the Canadiens. According to Dandenault, he dithered some on an offer from the Boston Bruins, and they quickly headed in a different direction. I'd gather there is a spot in the Canadiens lineup for the versatile veteran.

There was an interesting article yesterday by Bill Reynolds of the Providence Journal on recent Canadiens draftee Mac Bennett. Did you know Bennett's agent is Bobby Orr?

Bennett will be in Brossard starting Monday, as 40 prospects and invited players attend the team's annual summertime development camp that runs until June 12.

I'm considering attending for a day or so, depending on my schedule. We'll see what plays out. Below are lists sent out by the Canadiens of the prospects that will be in attendance. Click to enlarge. 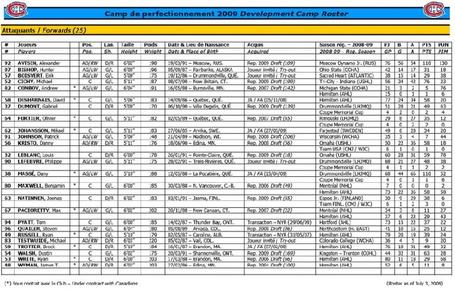 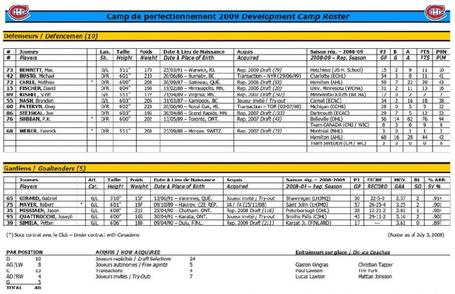