Cammalleri To Steer, While Gionta Works The Pedals

Share All sharing options for: Cammalleri To Steer, While Gionta Works The Pedals 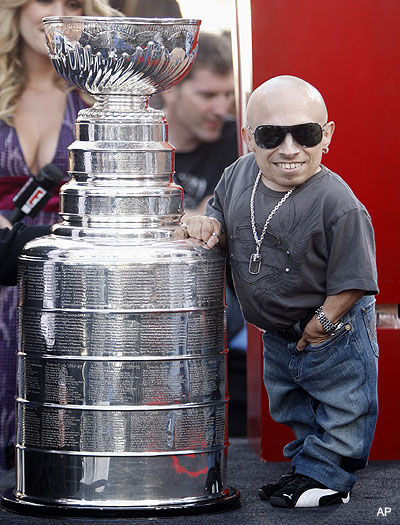 Late Wednesday night, after the Canada Day fireworks, I met up with a friend around 11 p.m. and I asked what he thought of what the Canadiens had done vis a vis free agent signings.

Laurier hadn't heard. Once I informed him he was stunned speechless for a good few seconds. The he looked at me and went, "You're kidding me, right?"

After the news had sunk in a little, he wondered whether Gainey was trying to make the team shorter or was just trying to stick it to fans that had demanded change.

I told him that I felt like I had either been suckerpunched or winded. All we could do was joke about it, and about how we take it too seriously.

In lamenting Koivu's likely departure, my friend suggested that Gainey may choose another non french speaking captain. He noted that it would be hilarious if they returned "Breezer" and gave him the "C". There's not alot of captain material on this club - french or english - either way. I added that if Gainey truly wanted to mesmerize, he'd name Andrei Kostitsyn the new captain.

AK46 can't speak either language much - it would be perfect!

Laurier noted that the local boys crew of Tanguay, Brisebois, Dandenault and Bouillon were history. Cue the next french media scandal. I added that the team was more French Foreign Legion than Flying Frenchmen in recent times, and I had to laugh reading a quote at Habs Inside Out yesterday morning having to do with the new top line.

"A Mexican - Alaskan, and two Italiens!"

Wish I'd read that on Canada day!

In my e-mails yesterday, I received an funnier jibe regarding the size of those new Habs acquisitions. Forwarded to me was a simple comment by a reader at www.insidesocal/kings named Trant who stated "Cammalleri could steer while Gionta works the pedals."

I laughed at that one all day long!

There are lots of questions about this new Habs team. All of them cannot be answered until they hit the ice come October.

By then, I just might have found my optimism.