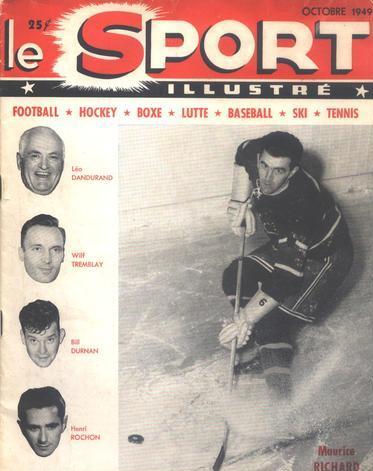 I found these photos from the Sports Illustre magazine about three months ago and stashes them in a file, waiting for the dog days of summer. If memory serves me correctly, they were posted by a reader on the RDS site, in the fans section.

Sports Illustre was a very popular monthly sports magazine in the 1940's and early 1950's in the province of Quebec, and prominently featured the Canadiens during the winter and their baseball playing tours in the summer. The magazine also covered football, baseball, boxing - you name it!

There are some great photos among this group below. I especially like the one of Bill Durna, after taking the puck in the face. Really as shots of the Canadiens playing against themselves in training camp. One photo features Jacques Plante, toque and all, against the Habs as a member of the Montreal Royals. 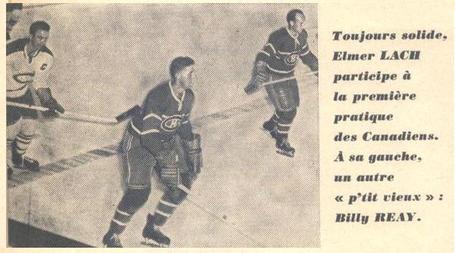 Elmer Lach's first practice with the Canadiens in 1940, with Billy Reay, future Blackhawks coach on his left. 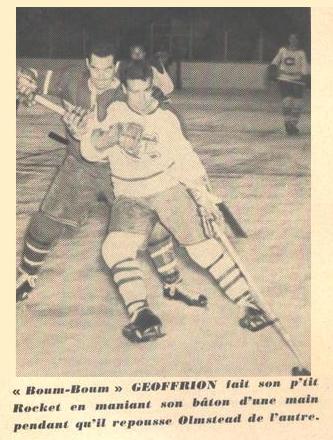 Boomer Geoffrion puts the hook on Bert Oldstead in practice. In today's scrimmages, this would likely start a brawl. 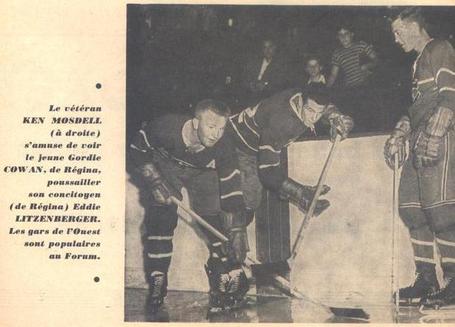 Assistant captain Ken Mosdell, shows western boys Gerry Cowan and Ed Litzenburger how a veteran takes his man out of the play.

Flooding the Forum ice prior to the start of training camp. The pipes are very visable below the ice. 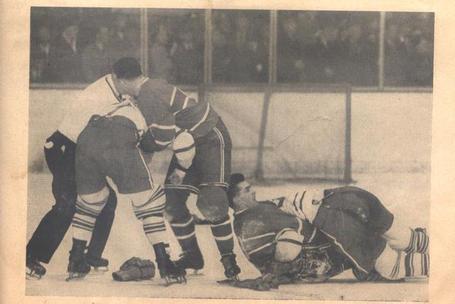 A typical Habs / Leafs tilt in the day. That's the Rocket with the Leafs player in a headlock. 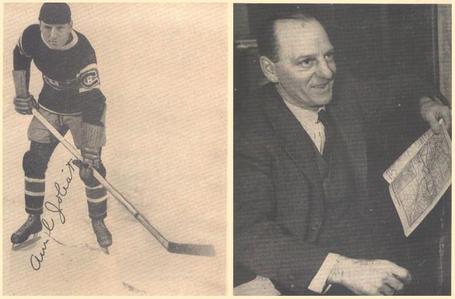 Aurele Joliat, then and now, with the latter photo being about 10 years after he retired, circa 1947.

More Habs and Leafs fun. Richard tussles with a foe as Turk Broda watches a battle in the corner. That's not Jean Beliveau on the left, who looks to have the upper hand on his rival. It would be either of Gilles Dube or Howard "Rip" Riopelle, who both donned the #4 in 1949-50. (Thanks to flipshot at HIO for the correction.) 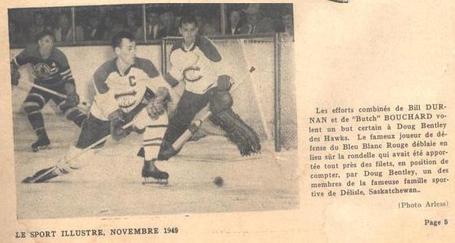 Butch Bouchard gets ready to swat a puck from Bill Durnan's crease. 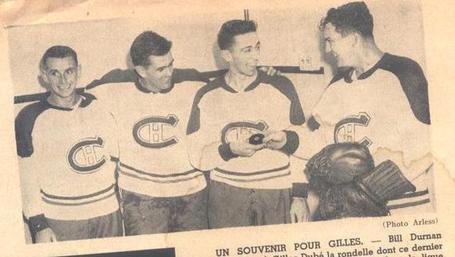 Durnan presents a puck to Habs prospect Gilles Dube on the event of his first training camp goal. 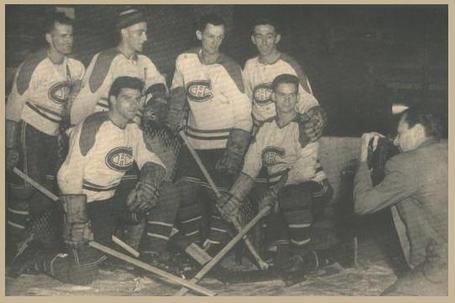 Jacques Plante in the toque, poses with some other Habs hopefuls at camp in the early 1950's. 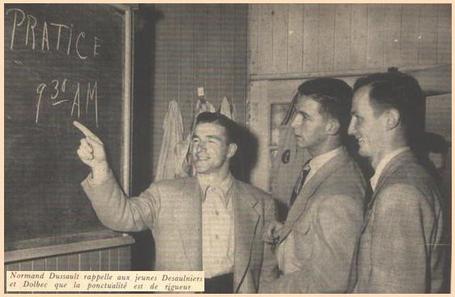 Norm Dusseault points out that practice in at 9:30 a.m., so there's no hanging out with Doug Harvey tonight! 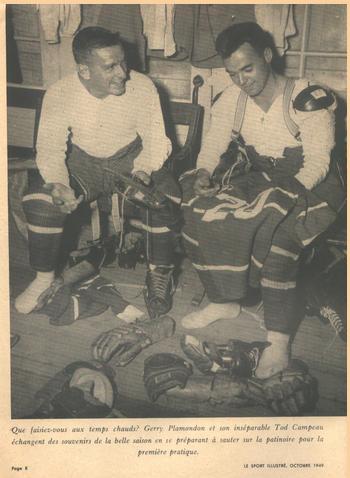 Tod Campeau and Gerry Plamondon ready themselves for traning camp 1949. 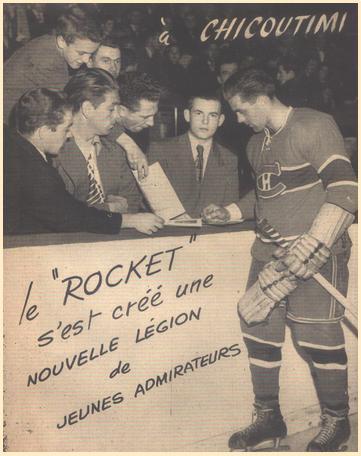 Young fans getting the Rocket's autograph during an exhibition game in Chicoutimi. Now now there's a sight you'll never see in an NHL rink today. 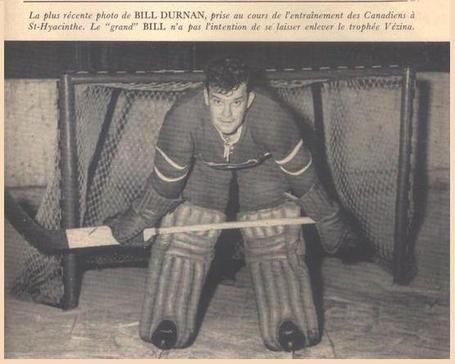 The ambidextrous Bill Durnan, at training camp in St - Hyancinthe. 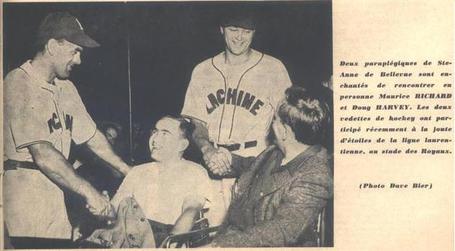 Rocket and Doug Harvey greeting fans at a baseball game, while suiting up for Lachine.

Rocket Richard nails a line drive. I hope the pitcher was a goalie! 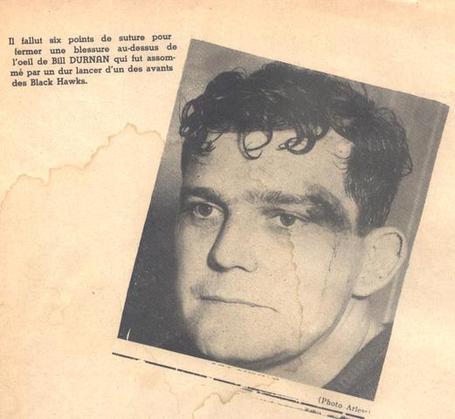 Bill Durnan took six stiches over his left eye to close this gash, after taking a shot in the noggin during a Blackhawks game. The stoppers of the day never had an easy night. 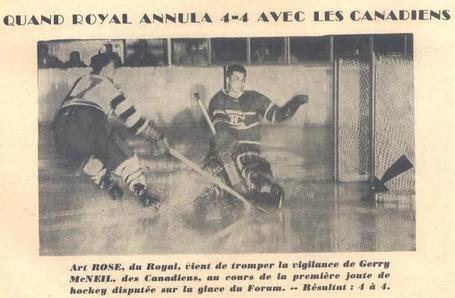 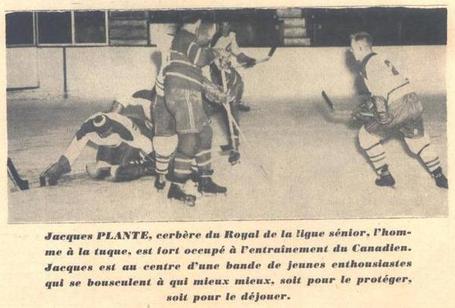 Jacques Plante, then of the Royals, perfoms admirably in traffic at the Habs camp. 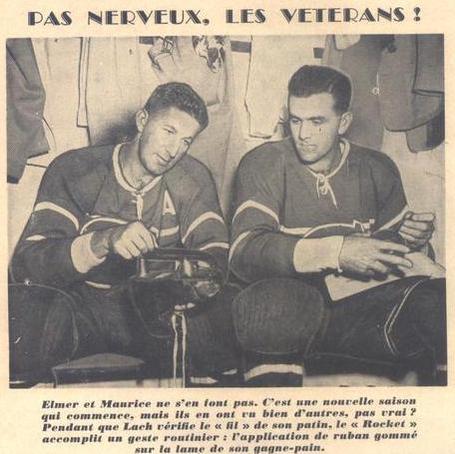 Elmer and the Rocket getting geared for a game. 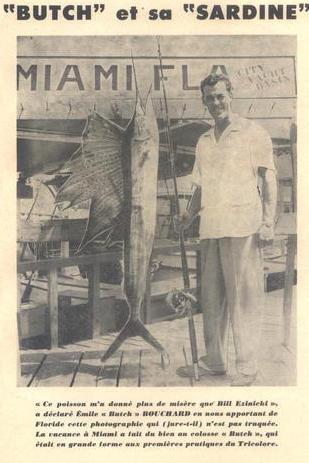 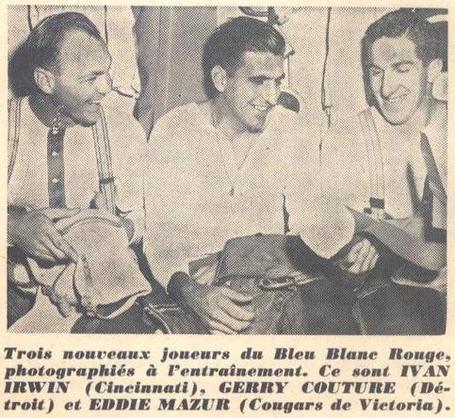