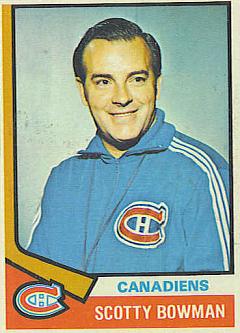 If you have followed NHL hockey for any length of time, surely along the way you have asked the question, what makes for a great NHL coach?

It is a question most often answered after the fact, once a coach has piled achievement upon accolade in a lengthy career. Coaches are as distinct from one another as stem cells, with their paths to the NHL being as varied as any road you will ever drive down.

A popular misconception has it that former NHLer's make for better coaches. Another theory suggests that former stars blessed with God given talent are less successful. Truth be, it is a bit of a connundrum (or maybe it's not) that the NHL's winningest coach - Scotty Bowman - never played a game in the league, while hockey's most decorated player - Wayne Gretzky - has not made the playoffs in four tries. In the middle of those two extremes, sits Hector "Toe" Blake, the only Hart Trophy winner ever to coach a team to a Stanley Cup.

The coaching equation may come down to this: a thinker, divided by talent, multiplied by experiences, translates into a disciplined and structured teacher and motivator, capable of leading men. Sometimes it is that cut and dried.

There's mitigating factors. Lots of 'em. For starters, great coaches make for better players on a team. Likewise, great players can elevate a seemingly ordinary coach into a winner. Just consider the effect Patrick Roy has had on the resumes on Jean Perron and Jacques Demers.

There are 30 NHL coaches each season, and every single one of them is deserving of being there, for one reason or another. While one must be successful to reach the NHL level, there are 29 coaches annually who fail to win the Stanley Cup. Such odds lead to rampant turnover at the position, often long before students of the game are acquainted with a coach's particularities in terms of knowledge and acumen for the task. 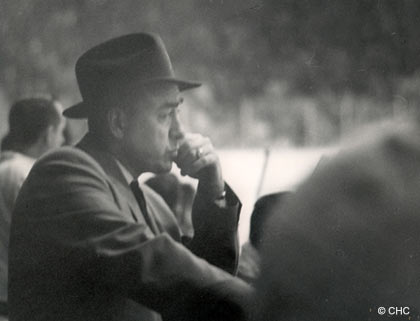 Fans and onlookers decry coaching systems, but the truth is, that once the NHL level is reached, there are no bad systems to speak of. It''s salesmenship by that time. No matter the system, a coach who can get his players - all of them individually - to buy into a concept, will be successful to a point. Those coaches who fail to sell their systems across the board, are meat. How well a person learns often speaks for how well they will instruct, regardless of the level of play they have achieved. With that understanding, a coach's resume of achievements assuredly, comes into play.

No green rookie coach would balk at an NHL veteran of a dozen seasons - never mind a Stanley Cup winning former player and say "What do you know?"

It boils down to top flight experience always being a good thing, whereas minimal experience speaks less loudly. Coaches who have walked the walk, can talk the talk. There will always be exceptions, of course, but theories are less often based upon exceptions.

With all that in mind, I thought it would be interesting to scan through the present 30 NHL coaches, ranking where they would be, based on experience and achievement.

The fun and discovery of all this, is that I have no idea where this will lead, what the findings will be, and what conclusion readers will come to. I'll be using experience in hockey as a springboard, and this excercise can be judged best once it is all added up.

It's far from a perfect template to judge from, but it does reveal interesting perspectives. I'm sure there will be arguments!

There are 21 former NHL players among the 30 coaches, the scale looks slightly tilted from the starting point. Seven current NHL coaches have won the Stanley Cup behind the bench. They are Dan Bylsma, Bob Babcock, Randy Carlyle, John Tortorella, Ken Hitchcock, Marc Crawford, and Jacques Lemaire. Babcock, Hitchcock and Tortorella have never played an NHL game. Crawford and Bylsma were role players at best. Carlyle was an individual player of merit. Lemaire had a stellar NHL career on a team bookended with dynasties. I think it is fair suggestion to make, that these seven coaches are fairly representative of the 23 others employed in the league. 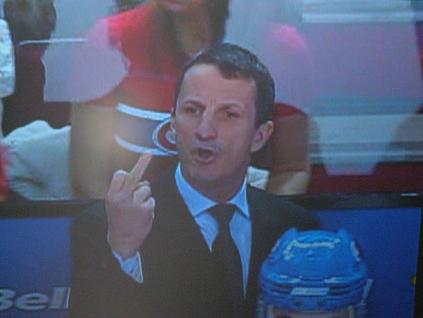 Keeping in mind that I am basing it on the notion of playing experience and previous coaching translating into success, here's how I worked a ranking system.

Points based on coaching career so far:

Per Stanley Cup wins as a coach: 25 pts

Points based on previous playing career:

Played minor/junior/U but did not reach pro ranks: 5 pts

Per Stanley Cups won as a player: 10 Pts

As it is difficult to fairly track, I did not include achievements as an assistant coach. There are also no points awarded for minor league wins, as these coaches are employed in developmental systems for parent teams and aren't strictly judged on the win column.

References used were the indivual coaching stats at Hockey Database and the Hockey Resource list of 362 NHL coaches all time records.