Share All sharing options for: Canadiens Avoid Arbitration With Plekanec 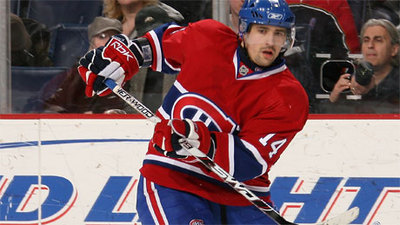 The Canadiens have avoided arbitration with center Tomas Plekanec, who signed a one year deal with the club for a reported $2.75M.

In seven off seasons, Gainey has yet to reach arbitration with any of his players.

All the non news you don't need to know is at the Canadiens official site. As per club policy, they refuse to acknowledge that the entire world knows what Plekanec will cost. Reports do not state whether it is a two way deal if Plekanec is demoted to the NWHL.

For myself, the deal is a little lofty for a player who has regressed. It seems he's being paid for a great season in 2007-08, and not the one he had last season.

The Canadiens now have 21 players signed (not including the signed Pacioretty and Weber) on their NHL roster, which now leaves, according to NHL Numbers, $3.226M to sign up Matt D'Agostini and Gregory Stewart.