The Enigma In Ottawa: Kovalev Meets The Senators Press

Share All sharing options for: The Enigma In Ottawa: Kovalev Meets The Senators Press 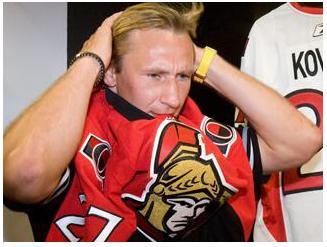 I wish him well against 28 other clubs!

Former Hab Alex Kovalev (Ouch! That still stings!) met the press for the first time today in Ottawa answering the usual Q's about why he chose the city and the perception that he is a hard player to coach.

You gotta love his answers on that one. He slightly contradicts himself by saying he's never had a problem with an of his coaches and one sentence later suggesting he doesn't know what the problems in the past were.

In other words, the enigma has moved on to the nation's capital.

A bit later in the segment, GM Bryan Murray is speaking on how terrified he was, when he was coaching against Kovalev, and he would step on the ice.

It's a funny clip. No matter how confident Murray tries to appear, he still comes off looking like the worry wart of the world. What gnaws at me are the words - the qualifiers, if you will - he chooses to employ, when he's discussing a move.

Nice to Alex surrounded by kids at the presser. Nice classy touch, even if some of them are picking their noses.