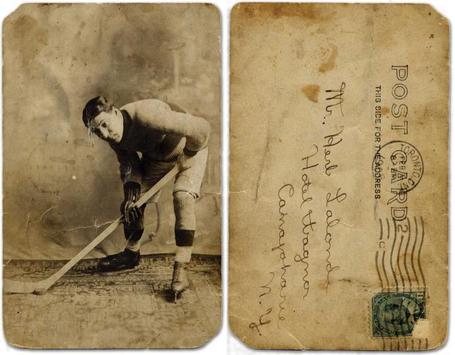 A real freak out day for a number of good reasons.

I often get e-mails at this site from inquisitive readers on a variety of subjects regarding the Habs, and it's always lots of fun to help readers out. In the past I've had queries about identifying a Habs player from a old photo, trying to locate where a former player currently lives, inquiries on statistics, old videos, hockey card values, finding authentic jerseys, where to information and so on.

Anyone taking the time to write, as a rule, always receives a reply, whether I can help out or not.

An e-mail yesterday got me out on the highway, and off to a reader's home - a first for me!

The note I received was a very detailed one, and went something like this.

"Mr. Lefebvre, I have a 60 page Newsy Lalonde scrapbook, containing newspaper articles, memorabilia, pins, old photos, lacrosse cards, Hall Of Fame momentos handed down from his mother and family through my great, great aunt, who was Newsy's sister. I wondering about the timeline of the contents, and thought you may be able to help."

I quickly e-mail the woman back, expressing my interest in helping whichever way I could.

How could I resist, huh? I mean Newsy Lalonde, come one...right up my alley, so to speak!

In my note back, I left a number to call and within a half hour my phone rang.

I must have spoken for over an hour with the lady, as she described one artifact after another, and was bemused and enthused that I was able to shed so much light on each of them. Through our conversation, so told me some about herself, noting that she used to live in the city. Upon telling where she had attended high school, I informed her that I had also gone to the same school about that time. When she told me her full name, I almost fell from my seat.

Wouldn't you know it - we knew each other from almost 30 years back! Right off the top of my head, I described how I remembered her, and I have no idea how or why it came to me so quickly.

We made arrangements to meet, and last night I was able to check out her scrapbook.

There were literally hundreds of newspaper clippings from throughout Newsy's long career as player and coach of the Canadiens. Much of the content was in excellent shape, with some articles dating as far back as 1904. Had I read through each invidual piece, I'd be there till Tuesday. 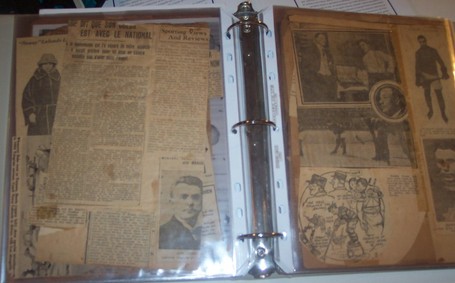 The clippings spanned from major achievements in Lalonde's storied career, to the daily musings found in any newspaper regarding a star player from the time. Taken all together, it was quite a trip back in time.

The woman is admittedly a casual fan of the sport, and what was most enjoyable for me, was filling her in on the details of Newsy's life and career. As the scrapbook has only recently come into her possession, she is just now learning of her great, great uncle, and the impact that he had on the game. She was an intent listener last night, as I gave her a crash course in Newsy 101!

In her initial e-mail, she offered that it would please her to see the contents turned into a book. After speaking for four hours, her interest in the idea has gained some traction. As she is somewhat new to the great many details of Newsy's time, I suggested that she check out the 25 seasonal summaries from 1909 to 1934 that I have here in the site's sidebar.

The book she wishes to see written, may have it's framework in those two dozen seasonal posts.

It is something that we agreed to look into and persue in the not too distant future.

Heck, I'd like to write a book or ten!

I hope your weekend's going as good as mine.