Oh, the Irony, and danger, of playing Washington in Olympic Stadium!

Share All sharing options for: Oh, the Irony, and danger, of playing Washington in Olympic Stadium! 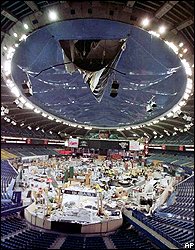 I can see it now, the Olympic Stadium roof collapsing, a steel beam taking out Alexander Ovechkin on a breakaway.

With word that the NHL is about to go ahead with a proposed date featuring the Washington Capitals at the Big Owe, it's only a matter of time and circumstance before disaster occurs.

You have to imagine that there may be the odd cat call from the sidelines wishing for a beam to drop on a Washington player - karma - like payback for running away with the Montreal Expos.

Jeff Marron of ESPN does a detailed encapsulation of the two dozen incidents that have marred the Big Owe roof's existance from 1976 to the present day. Here's some noteworthy samples.

Engineers determine that the tower, designed to lean at 45 degrees, won't be structurally sound if completed in concrete, as originally designed. Steel is used instead.

Explosions and fire in the tower interrupt an Expos game, causing $1 million in damage. Nobody is injured.

A chunk of steel falls from the tower and lands near the Expos bullpen while a game is in progress.

As the tower is being welded, sparks fly from a torch onto the roof of the swimming pool next door, causing a fire and $100,000 worth of damage.

June 8, 1987: Rain cascades through the roof during an Expos game, soaking fans.

1991: A tornado rips four huge holes in the stadium roof.1991: Sixteen support beams snap, sending a 55-ton concrete beam crashing onto a walkway, forcing the Expos to play their last 13 home games on the road.

1994: A concrete wall collapses near truck displays at an auto show.

1998: Ice falls through the roof, forcing the cancellation of two Rolling Stones concerts. Finally, the City of Montreal gives up on the Kevlar roof and removes it, replacing it with a fixed roof later that year. Rumor has it that the old roof was sold for $1 to a company that turned it into curtains.

1999: One of the 63 fiberglass roof panels collapses during a snowstorm and crashes to the floor where hundreds of people are working to set up for an auto show. Hundreds of tons of snow and ice tumble down, but, miraculously, only a few people suffered minor injuries. As a result, a Muslim prayer service expected to be attended by 10,000 is cancelled. "Too bad," said one journalist. "This building can use all the prayers it can get."

2000: The company that bought the Kevlar roof starts selling it back to the citizens of Montreal in tiny pieces for $4.75 a pop.