Share All sharing options for: Ovie at the Big Owe on the NHL's Schedule for 2009-10 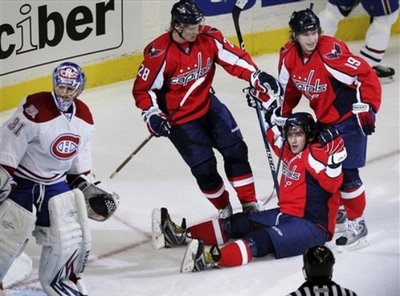 A report from Tim Wharnsby of the Globe and Mail indicated that the Olympic Stadium in Montreal will host Alex Ovechkin and the Washington Capitals in late November.

The NHL's 2009-10 schedule is to be released in the coming day or so, pending final approvals.

The Olympic Stadium contest, slated to be an indoor game, met with with the approval of the league's competition commitee three weeks ago.

One week after that proposed date, the Canadiens will host the Boston Bruins in what is being billed as the Centennial Game for the Habs.

The oddity is, the game will take place one day after the centennial date, on Saturday December 5.

Expect great criticism directed at the NHL for pushing the date off by one day in order to garner more outside coverage of the event.

My first question would be, wouldn't more people be free to watch the game on a night when other NHL clubs play less often?

A noggin scratcher for sure!

The Canadiens will open the season on the road as has been the custom the past few seasons.

Due to the 2010 Olympics, the schedule begins a week earlier, and the Canadiens will get things started with a game against Mike Komisarek and the Toronto Maple Leafs on October 1.