Share All sharing options for: A Hulluva Time Indeed! 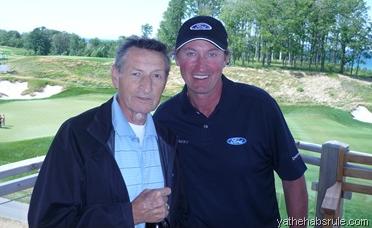 Kevin van Steendelar of Ya! The Habs Rule! has wrapped up his weekend at Gretzky Celebrity Invitational in Georgian Bay and has posted a very insightful accounting of the event. In addition to a winning bid to walk alongside Brett Hull, Kevin also had the good fortune of gaining media creds for the event. He relates his weekend through a fan's eyes, and it's a true must read!

Imagine, winning the chance to walk alongside Hull for a weekend and rubbing shoulders with Wayne and Walter, some select NHLer's, various hockey media, and some golf pro's as well!

Between holes, swigs and mulligans, Kevin had a chance to interview the likes of Hull, the Habs Kirk Muller, Canadian female hockey icon and HNIC commentator Cassie Campbell, Darren Pang and Nick Kypreos.

Kevin's enjoyable weekend is also documented with a fair amount of photos, such as the one seen above.

I don't know about you folks, but would you rather shake Gretzky's hand or interview Cassie Campbell.

Me, I'd take Cassie anyday! 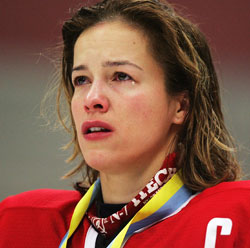