Share All sharing options for: Habs Get A Big Centerman - Andreas Engqvist Signed 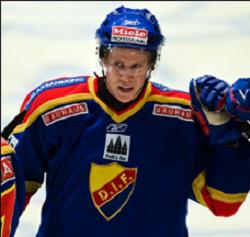 Andreas Engqvist flew under the radar some at the Canadiens development camp this past week in Brossard, but emerged from it with a contract in hand.

Not listed as attending camp when the 40 player roster was announced, Engqvist impressed enough to earn a contract with the team, scoring a goal his white side's 7-4 win over the Red's in Saturday's scrimmage. He will likely join recently signed Swedish compatriot Mikeal Johansson in starting the season on the Hamilton Bulldogs' roster.

Canadiens General Manager Bob Gainey announced Monday the signing of forward Andreas Engqvist to a three-year contract (2009-10 to 2011-2012). As per Club policy, financial terms of the agreement were not disclosed.

Last season, the 6-3, 196-pound centreman totaled 16 points (9 goals, 7 assists) and 12 penalty minutes in 31 games with Djurgardens IF of the Swedish Elite League, before a wrist injury forced him out of the lineup for the team’s last 24 regular season games.

Engqvist participated in the Canadiens’ development camp last week at the Bell Sports Complex in Brossard.

One poster on the Canadiens Fan Forum (for what it's worth) was impressed with Engqvist's skills:

Andreas is the kind of player that thrives in a structured game whre he can "dictate" down the middle and can do some unexpected things (touch of flare). Maybe that's why Gainey & Martin are interested in seeing him right now. When the game breaks down and its more run and gun his speed isn't sufficient to be really effective, although he has his moments in those kind of games/breakdowns of games. I can see why some people compare him to Sundin (there are similarities) but he lacks that sheer top quality of killer instinct and he is more of a two way player really compared to Mats. Andreas may elevate his offense given the chance for pure scoring duties, but Djurgården uses him more in a controling role. Let him loose a little and see where that will land him. All in all I like him and it will be fun to see where this is going.