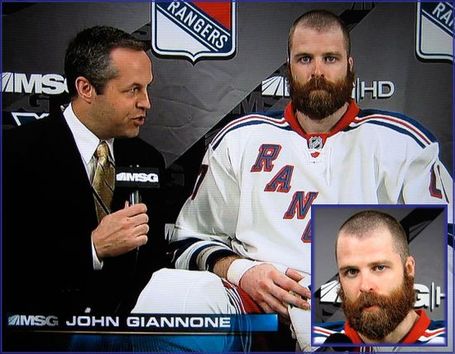 On the NHL Network last night, a replay of Game 4 of the New York Rangers / Washington Capitals series was on. The Rangers won that game 2-1, despite a late last minute call to Sean Avery - the dumbass.

I was happy to find it was on - it was a chance to check out new Habs Scott Gomez and Paul Mara in action.

Mara scored the game's first goal on a deflection, and what ensued in the broadcast was kind of funny. Brandon Dubinski of the Rangers had won the faceoff back to Mara at the point, and he fired wide by about six feet, hitting the shaft of Capital's Milan Jurcina's stick, which redirected the puck past goalie Simeon Varlamov.

As the shot had filtered through a crowd, the goal was first credited to Markus Naslund, who was standing in front of the net. On replay showed the only person the puck hit was Jurcina.

"Certainly that will corrected", said the commentator.

Moments later, they mentioned after a commercial break that Naslund had skated over to the referee to inform he hadn't touched the puck. Over the MSG loudspeakers, you could hear the goal being credited now to Dubinsky.

"They'll get this right eventually", they added.

After another commercial, the colour man on the broadcast said the goal was now being credited to Rod Gilbert, who retired sometime around 1980. They did finally get it right.

In speaking of Mara, they briefly discussed his playoff beard, noting that it wasn't a true one in the proper sense of the term. Mara had actually started growing it late in the regular season, after having been sat out for a game by new coach John Tortorella. It was quite the head start Mara had over other Rangers. On one website, it was mentioned that it "looked as though someone transplanted Chewbacca's ass on Mara's face."

Mara was overly rugged in this game, taking a pair of exhuberant penalties that surely weren't called for. I didn't know he played such a physical style, but it was apparent that he rarely misses an opportunity to go a little "Craig Ludwig" on an opponant.

As for Gomez, he didn't impress me a whole lot in this one. I found he played the perimeter too much, dishing off fancy passes when confronted by traffic. Certainly, he did not appear to be as small as some suggest. He's 5' 11'', and looked like he should have been doing a whole lot more. Gomez seemed to be cautious defensively and didn't turn the puck over carelessly. Oddly, I never once saw him as the first Rangers forward back into his own zone.

By any account, it's hard to get a read on a player in just one game. The Rangers win put them up 3-1 in the series, but the Capitals came back to win the final three games to take the series in seven.

For those interested, the NHL network is replaying the entire playoffs over the summer. I'll be checking the network out more closely as this goes on. They are still doing Round 1, so I'll keep an eye open for games involving Brian Gionta, Travis Moen, Mike Cammalleri and Hal Gill.

Over the summer, to fill up time and space here, I'll be posting more You Tube clips than I normally would. At a time where we are craving hockey - why not, eh?

If you come across any interesting clips to do with Canadiens players, drop the link into the comments section or fire me an e-mail and I'll post them. Here are five that caught my eye today. They are Paul Mara mic'ed on the ice during a recent recent Rangers game, and episode of Coyotes Pads with Mara and Ossie Vaananen, and three Travis Moen tilts with Steve Ott, Daniel Carcillo and Jared Boll.